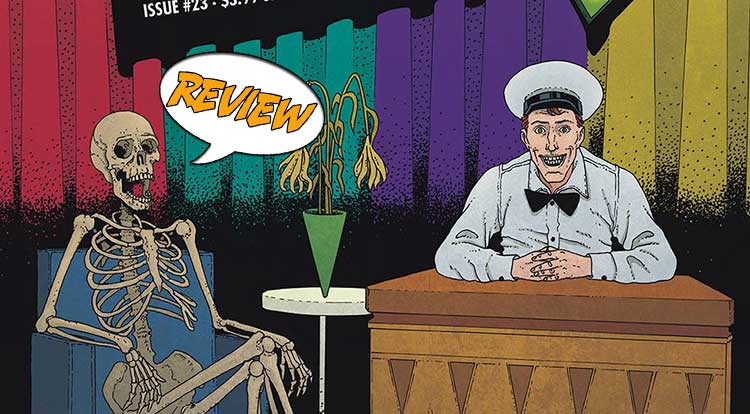 In Ice Cream Man #23, Mack Benson is a top rating late night talk show host, beloved by millions!  But behind every great man, there are a host of scandals ready to pounce, such as the snake that gets to know Mack uncomfortably well.  How well?  Find out in your next mighty Major Spoilers review! Previously in Ice Cream Man:  Writing horror is easy, but writing comedy is hard.  All throughout the Ice Cream Man series, writer W. Maxwell Prince and artist Martin Morazzo have brought blackly humorous but chilling vistas to their readers – the suburbs are hellish wastelands, the end of one universe and the beginning of ours, journeys to the uttermost reaches of space and time.  It’s all grist for the mill, an amazing kaleidoscope of terrors that bring a forced grin to your face…

Ice Cream Man #23 is something of a departure from what we’ve seen before.  Writer W. Maxwell Prince has combined a traditionally told comic book story with length written word sections, illuminating the inner thoughts of the cast of characters.  The visuals by Martin Morazzo are as excellent as ever, displaying in minute detail the fraying reality as Mack Benson’s talk show goes from normal to cray-cray in record time.  It is in the longer written pieces, however, that Prince displays his guiding philosophy for the series.

Nothing we do matters one bit, and everything will continue spiralling into utter chaos and damnation no matter our good intentions.

As a way to deal with the blackly humorous fact of existence, it’s one hell of a gut punch.  But when you think about it, once you accept the reality that everything we’ve ever done, the emotions we’ve expressed, the world we’ve experienced, then the inevitable slide into the darkness is something you can embrace with a light heart and a skip in your step.

Prince’s trademark black humor is on fecund display in Ice Cream Man #23.  We see the saccharine smooth veneer that Benson presents to the audience, but soon, the spaghetti has hit the wall and reality has decided to take a holiday from the insanity infesting it.  An animal handler, that staple of the late night show, turns up with a variety of either sinister animals, or food for the sinister animals – little does Benson know that he’s on the menu as well.  Cue screaming (and, to be frank) a lot of laughter.

LET ME TELL YOU A STORY…

The longer written pieces are the highlight of the issue, clearly an itch that Prince has been wanting to scratch for some time (don’t scratch too deep, Prince, otherwise there will be blood jetting everywhere – but we’ll laugh, even so.)  The dark, Twin Peaks style underbelly of the main characters, from lovelorn show producer Brian Pardue, to Benson’s put upon, ready to divorce him wife Loretta – is displayed in all their glorious humanity.  Intern Cadence goes on an extended riff about her attraction to Benson, and the love they make in his office.  Even the animal handler gets his time in the sun, and it is in this written piece that Prince’s guiding philosophy (nothing matters, so grin and suck up the fact of an uncaring universe ready to swallow you whole like a…snake) is expounded at length.  This method of telling a comic story is nothing new, but boy, does Ice Cream Man #23 take the bull by the horns and go all the way.

BOTTOM LINE: WHEN DO I WAKE UP FROM THIS NIGHTMARE, MOMMY?

Ice Cream Man #23 is everything you’d expect from the series – blackly humorous horror suffused with an interesting take on the universe at large.  Entering its pages is like stumbling into a nightmare, the sort of nightmare you can’t possibly imagine knowing when you’ll wake up.

A talk show host and an animal handler meet one night and all hell breaks loose in another startlingly good issue of Ice Cream Man. This series gives expression to a number of unique creators in the comics industry, the sort of voices that beguile and lure the reader into a hell of their own imaginings...