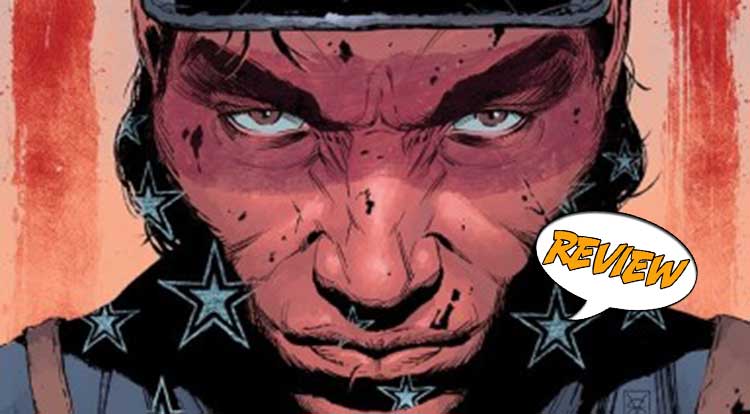 In Two Moons #1, sharpshooter Virgil Morris aka Two Moons, fights on the Union side against Johnny Reb.  Plagued by visions of creatures out of nightmare, he begins to question himself and the war.  What will he find?  Find out  in your next mighty Major Spoilers review! Previously in Two Moons:  Two Moons was born of the Pawnee nation.  After his parents died from fever, he was raised by white folk, who gave him the name Virgil Morris.  Two Moons believes he has assimilated with the mainstream of America, but the war reveals fault lines not only in that stricken nation, but in his attitude to himself.  War is Hell, but when Two Moons begins to have visions that conflict with his Christian upbringing, it will be things worse than Satan he must contend with…

WHEN TWO SIDES GO TO WAR…

Two Moons #1 is very much a comic for our times.  A tale about a nation at war with itself, prepared to ignore fraternal bonds for the savagery of the battlefield, it takes two characters, outsiders, to illuminate the good and evil that afflicts the land.  Two Moons is the personification of that conflict, a Pawnee whose parents died of fever, and was raised by white foster parents who inculcated in him his devotion to Christianity.  But that assimilation isn’t enough to erase the suspicion of his fellow soldiers, which isn’t helped when he begins to have visions that recall his Native American ancestry.

Writer John Arcudi has done a very good job of depicting a man caught between two worlds – what he thought of as his place, and the dawning realization that that world isn’t what he thought it was.  The intrusion of the supernatural, or at least, disturbing visions, further undercuts Two Moons understanding of the place he has in white society.  This sense of dislocation is further developed in the shape of Nurse Shaw, a recent Irish immigrant to America, who finds herself horrified by the carnage around her, which helps draw her closer to Two Moons.

Aside form the deft characterization, Two Moons #1 is an interesting and compelling read.  Valerio Giangiordano’s artwork, for the most part, is quite good.  Sometimes I felt a certain stiffness in the poses of the characters, but for the most part, Giangiordano knows how to put together a visual story.  The battle scenes are quite striking, demonstrating the utter chaos as men fight and die amidst scenes of confusion.  I really appreciated the way he brought to life the sheer feral rage of Sergeant McBride, a troll-like figure whose physicality dominates any panel he appears in.  And when he turns into a monster out of Pawnee myth, well, that’s a heart stopping moment.

I’ve always had a particular fascination for this period of American history – the way a nation can become a stranger to itself, how those who had lived once under one flag, eagerly embraced division and the violence that followed.  Arcudi captures that sense of brother against brother, how differing ideologies can make us turn against the very people we might once have greeted in the street.  Two Moons #1 shows how that conflict can become internalized, as we see with Two Moons, who for all his belief that he has been accepted by the white man, suddenly discovers a wholly new world drawn from his ancestral ties.  He’s a stranger in a strange land here, whose visions are drawing him away from the world he once thought accepted him.  It’s an apt metaphor for some of what is happening in America today, and Arcudi’s thoughtful take on it is both interesting and welcome.

BOTTOM LINE:  THE BLUE AND THE GRAY

Two Moons #1 is a strong opening issue for a series that straddles both the here and now, and the liminal space in between.  Two Moons is a strong character, someone confident in his skills, if not in the visions that have begun plaguing him.  The battle scenes, the virulent hate between both sides, are well depicted, and the art, for the most part, is strong and visceral.

Strong visuals, characters with heft and weight, and a sense that things are coming apart not only in a nation at war, but in our lead character, mark Two Moons #1 as a strong opening issue in what promises to be an exciting and intriguing series.