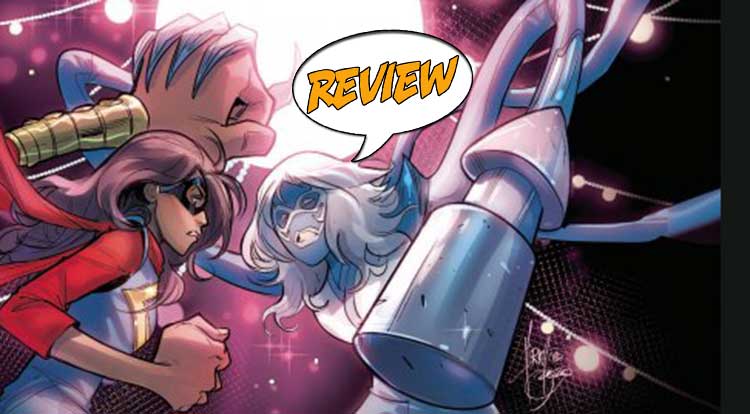 Kamala’s life has been full of ups and downs, but it’s finally settling down. Will she have enough peace and quiet to get through the big Homecoming Dance? Find out in The Magnificent Ms. Marvel #18 from Marvel Comics!

Previously in The Magnificent Ms. Marvel: Kamala has unintentionally found herself the face of a movement to ban underage superheroes. A task force, C.R.A.D.L.E., led by Dum Dum Dugan, is enforcing this ban. Kamala manages to evade them – and keeps operating as Ms. Marvel, until one of her friends, Zoe, tips them off to her location. But when they catch up with her, they also find themselves facing the zombified employees of Rubicon. They work together against them, and Dugan calls off his pursuit. Are things finally settling down?

A RETURN TO NORMALCY?

The Magnificent Ms. Marvel #18 starts dramatically with Kamala grappling with Stormranger, her indestructible alien battle suit, and mentally going over her bad decisions in life. But how did we get here?

Two days ago, Kamala’s school gym finally reopens and to celebrate, the homecoming dance will go on as scheduled! Kamala is pretty hyped for this. After months of craziness, she’s able to appreciate normal teenage activities. She goes home and her father is with a physical therapist working on his walking. His recovery is going well, if slowly. When her brother’s family shows up (almost as excited about the dance as Kamala is), Kamala realizes how busy she has been and how out of touch with social media.

She has even made up with her friend Zoe, who picks her up for the dance. There they meet Nakia, whom they have convinced to come and soon Mike and Bruno show up. It is when they are taking selfies that Kamala spots something on one of the pictures, a glowing dot that she recognizes immediately. She barely has time to run outside and change into her costume before Stormranger arrives and attacks. The alien battlesuit is strong and quick, more than a match for Ms. Marvel. But Ms. Marvel has friends. Amulet spots the fight and comes to help her. His mystical shield deflects an attack, but only temporarily. When Stormranger comes in for a killing blow, however, his shield pops up, bigger and stronger than ever. His powers are being enhanced by the affection of Kamala’s friends who are worried about her. Armed with this knowledge, she is able to talk Stormranger down.

By the time this is all done, the dance is over. She has missed out on another chunk of normal life. Except that she has only missed the dance. Her friends have waited for her, and they’re glad to see her back and safe.

The art of The Magnificent Ms. Marvel #18 transitions effortlessly from Kamala’s normal life to her superhero battle. I enjoy seeing her relishing normalcy, however briefly. But I particularly enjoyed seeing her with her family. Her mother sets it up so when she reminds Kamala about getting ready for the dance, her father is like, “Homecoming dance?” He pulls this off wonderfully, and he has a terrific smile when he confesses to messing around with her. And Kamala’s interactions with her little nephew are really sweet.

Everything becomes larger than life when Stormranger arrives. From a neat procession of panels with borders, the action brings with it a variety of panel placement with action that breaks the frames. It’s such a small thing, but it effectively allows the artist to use a wider variety of panel sizes and it gives the story an increased sense of movement. This is a tough fight for Kamala, and I appreciate that she starts looking grubby and scraped up as she gets into the fight. She’s tough and strong, but she is not entirely invulnerable. She also has terrific determination.

The Magnificent Ms. Marvel #18 finishes out her story in grand style. Kamala is an enjoyable young character, still growing and developing, but with a strong sense of fairness and a willingness to get out there and help people.

Just when Kamala’s life was starting to settle down, a nemesis comes to visit.