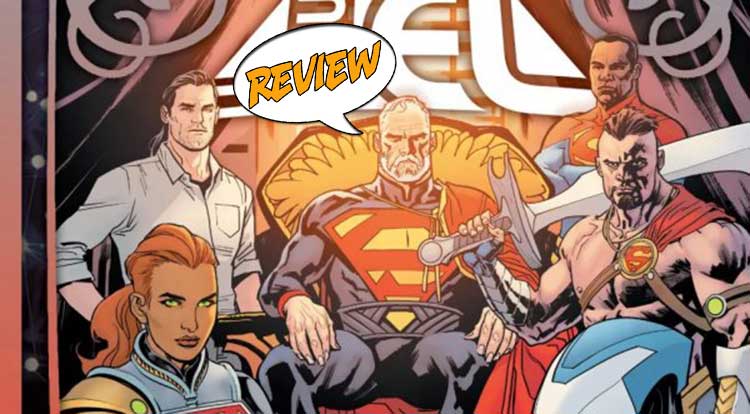 The Red King has arrived and with him the final days of The House of El.  Your Major Spoilers review of Future State: House of El #1 from DC Comics, awaits!

Previously in Future State: House of El: An army composed of the forces of Apokolips, New Genesis, and modified Doomsdays, led by the mysterious Red King has decimated the galaxy and only The House of El stands in his way.

Future State: House of El #1 opens up mid-fight as various descendants of the El family are holding off the forces of The Red King and it’s not looking great. They manage to push the parademons back for the time being and recoup inside.  Brainiac 4 is there using the last  bit of the Fortress of Sanctuary’s computer power to search for something.  They are then joined by a Blue Lantern who also bears the mark of Superman.  She informs them that the coalition of Lanterns has fallen as well as everyone else who’s stood up to The Red King.  Another attack begins, during which Brandon Kent, known as Papa by everyone else perishes. After that attack the remaining heroes question if Kal El ever really existed.  Brainiac 4 announces he’s found what he’s looking for but is quickly killed by The Black Racer.  The Red King then uses Brainiac’s body to speak to the survivors, telling them that those who don’t surrender by morning will die.  The next day arrives and The Red King’s identity is revealed and reinforcements arrive.

EVERYONE LOVES A LAST STAND STORY

There’s a reason why people love things like The Battle of Helm’s Deep or The Battle of Winterfell, that overwhelming feeling of dread with pinholes of hope as the combatants resign themselves to a glorious end triggers something in us.  And Future State: House of El #1 captures that feeling wonderfully. Even though this is the first time we’ve been introduced to a lot of these characters, we are given just enough information on them to make the reader pull for them.  Also, there’s a lot of clever and subtle storytelling going on here, for example it’s never explicitly said, but it’s clear that these characters have never met the original El family. Also, the way that the Superman symbol is integrated into other familiar costume motifs drive home that this is truly a multifaceted family from all corners of the galaxy. Even with all this going on though, there’s no skimping on the action. Panel after panel of fighting takes place here and it truly captures the same sort of epic feeling that those battles I mentioned earlier have.  All of this then leads up to one of the most pure “Superman endings”, in the best ways, in a long time.

THE BOTTOM LINE:  I WANT MORE OF THIS

The story of Future State so far has been a lot of “oh that’s neat” but nothing that has really stuck out as something that deserves a lot more.  This one breaks that trend. The creators took the opportunity they had and managed to put together a story that hints at a truly epic mythology just waiting in the distance.  Well written characters, interesting plot twists, and intense action puts this in the upper echelon of all the Future State lineup.  5 out of 5 Stars.

Future State: House of El #1 does so much in such a small amount of pages it’s astounding. Of all the possible futures seen in Future State, this one is the first one that deserves a much deeper examination.