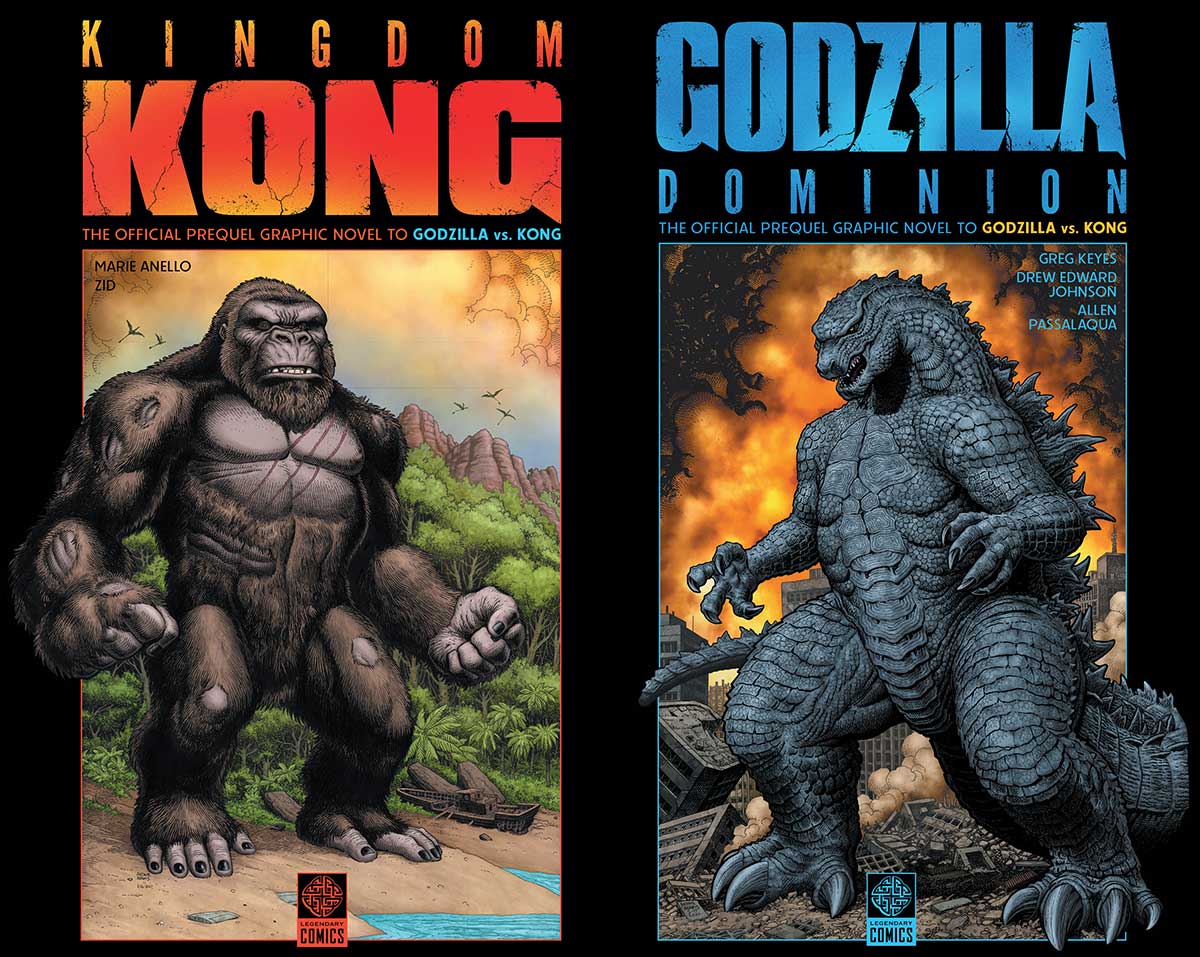 Legendary Comics exclusively debuted the new covers for its upcoming Godzilla vs. Kong prequels (Kingdom Kong and Godzilla Dominion) as well as for the Monsterverse Titanthology Vol 1, all by acclaimed artist Arthur Adams. KINGDOM KONG
A sequel to the graphic novel Skull Island: Birth of Kong and a prelude to the film Godzilla vs. Kong, the upcoming prequel graphic novel, Kingdom Kong, will follow a group of highly skilled military pilots gathered together on Skull Island to see who has ‘the right stuff’ to take on a dangerous mission into the hollow earth. One of the pilots, Audrey, is haunted by the memories of a monstrous clash with one of Godzilla’s titanic rivals that left deep scars. When Skull Island is attacked by Camazotz, a bat-like Titan, Audrey must come to terms with her inner demons, and finding his home newly threatened, Kong must rise to face this usurper that would plunge the world into perpetual night. Kingdom Kong is written by Marie Anello (Shout Out) with art by ZID (Legendary Comics’ Skull Island: The Birth of Kong; Trick ‘r Treat: Days of the Dead; Spectral: Ghosts of War). GODZILLA DOMINION
Godzilla Dominion—the prequel graphic novel written by Greg Keyes (the Age of Unreason trilogy; three New York Times bestselling Star Wars novels in the New Jedi Order series) with art by Drew Edward Johnson (DC’s Wonder Woman, Supergirl; Legendary Comics’ Godzilla Aftershock)—will feature a unique story that picks up after the events of the film Godzilla: King of the Monsters, where the Titans have risen and the reign of Godzilla has begun. As told entirely from Godzilla’s point of view, the graphic novel brings new insights into the King of Monsters: his habitats, ancient rivalries, encounters with new Titans, and other challenges. As his new era of dominance is tested, a coming confrontation with another King looms. MONSTERVERSE TITANTHOLOGY VOL 1
For new readers wanting to discover the backstories of Godzilla and Kong for the first time or fans revisiting their favorite adventures, the Monsterverse Titanthology Vol 1 brings the previously released graphic novels, Skull Island: The Birth of Kong (2017) and Godzilla: Aftershock (2019), together in one legendary volume for the first time ever.