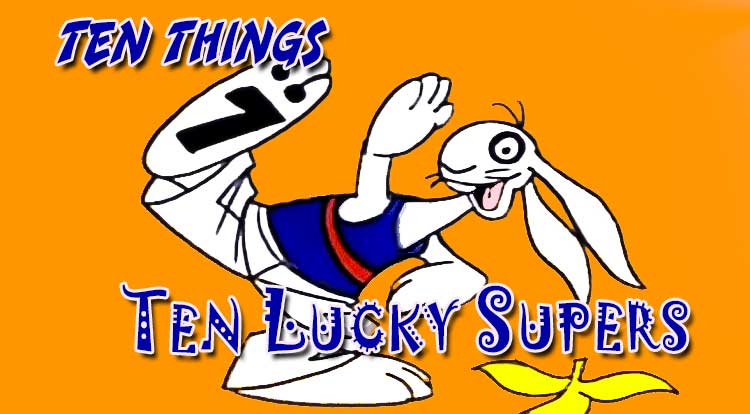 Whooshman-Bicarbonate Films, in conjunction with An Amateur Comics Historian and a four-leaf clover, Presents:

Though her real name is never given, it may be Neena Thurman, like her comic counterpart.  Regardless of what you call her, though, Dom quickly proves Deadpool wrong about the usefulness of her powers.  The only survivor of his slapdash plan to attack a prison caravan to save a teenage boy, she is seen to hold her own in combat against the Juggernaut and dispatch an entire roomful of armed orderlies with lethal levels of awesome. The seventh son of a seventh son, born on the seventh day of the seventh month of 1917, Johnny inherited cosmic powers in the form of a magical genie.  Initially, it seemed that things just went his way, but eventually her realized that his verbal tic of “Say, you” was summoning an actual genie to aid him.  He even became a member of the Justice Society of America, though he never quite mastered the ability to use his partner with 100% effectiveness.  Later stories would retcon that Thunderbolt was in fact Yz, a fifth-dimensional imp from the same place as Mr. Mzyzptlk and Bat-Mite, with an elderly Johnny’s soul inhabiting Yz after Johnny’s death. Originally a petty criminal, the man called Talisman (who, if he has another name, hasn’t shared it) was captured and press-ganged into Georwell’s primary super-team, The Justice Machine, whose unofficial team battle cry became “Shut up, Talisman.”  His powers seem to be karmic in nature, giving him good luck when he does good and vice versa, allowing him to operate in the middle of superhuman combat situations untouched.  Callous, cynical, obnoxious and generally unpleasant, he is a chain-smoker who somehow ends up being a core member of the team, even fleeing Georwell with his teammates and developing an odd couple friendship with driven martial artist Demon. One of Emma Frost’s first class of Hellions at the Massachusetts Academy, Jennifer Stavros can create “probability discs” that allow her to manipulate luck, with red ones giving good fortune and black ones bestowing bad.  Very seldom seen outside of crowd scenes, Jennifer and her fellow Hellions were killed (rather brutally) by the villain Trevor Fitzroy, but have been resurrected as a citizen of the mutant nation of Krakoa.  Despite her nom de guerre, she is not the Hellion with the thick phonetic French accent. Empowered with magical ability by an ancient book of spells, Gwen Tennyson got to live out her own superhero fantasies instead of just playing backup to her cousin Ben, aka Ben 10.  Thanks to a magical charm, she finds things always falling in her favor, and Gwen enjoys both the success and the attention, until the original owner of the charm came calling, forcing her to destroy the charms for the greater good. In the future reality of Earth-691, Irish superhero Molly Fitzgerald was awakened after centuries in stasis.  Using the mystical Book of Kells,  Molly brought back the warrior Cúchulain and served as his partner/handler.  Just as she had in the past, Molly seemed to have the power to give herself good luck, an ability provided thanks to her being surrounded by the ghosts of all those who died during The Troubles.  It’s an absolutely horrifying super-power, in addition to being an ethnic sterotype, faith an’ begorrah, so we’ll just move on. With blades as sharp as he himself is dull-wtted, the warrior called Groo walks the world having adventures.  Said adventures almost always leave cities in flames, wanton destruction and angry mobs demanding his head, but that’s not entirely his fault.  Moreover, our idiot mendicant escapes unscathed from his own accident-prone nature, making him an example of both the good and bad luck varieties: Good for himself and his faithful hound Rufferto, bad for nearly anyone and everyone in his path. Seen here in her ’80’s leather jacket phase, Felicia Hardy is a legendary jewel thief and cat burglar, taking after her late father.  After taking on the alias of Black Cat, she began a relationship with Spider-Man, even seeking out super-powers that would make her his equal, only to find too late that she was being set up by The Kingpin.  Her new bad luck powers helped at first, but seemed to be cumulative for those around her, nearly leading Spider-Man to his doom.  With the help of Doctor Strange, her luck powers were taken away, but her relationship with Spider-Man never recovered. Sailor Danny Barr had white horses, and ladies by the score, all dressing white satin and waiting by the door, metaphorically speaking, and so set out to be a masked adventurer.  Using nothing more than his luck and his wits, he went to fight wars for country and king, so his honor and glory would be something to sing…

…about.   And ooh, what a Luckyman he was.  *Seventeen-minute synthesizer solo* A native of the the extradimensional Mojoworld, Longshot (his real and only name) was genetically engineered to serve as a stunt man for Mojo’s endless circus of wonders.  Refusing to live as a slave, he accidentally started a rebellion, the fled to Earth, discovering that his probability-altering powers were practically a super-power.  Falling in with the X-Men, he ended up finding love with Dazzler, even fathering a child with her.  Thanks to #TimeTravelShenanigans, that child was sent back in time to provide the DNA that created Longshot, thus making our three-fingered hero his own grandpa.

Thanks to Faithful Spoilerite Sarah for this week’s topic, Ten Lucky Supers!  Feel free to follow along @MightyKingCobra for more Ten Things madness on Twitter or check out the full Twitter archive here!  As with any set of like items, these aren’t meant to be hard and fast or absolutely complete, if only because it means writers will have an excuse for last-second saves and deus ex machinas.  Either way, the comments section is below for just such an emergency, but, as always: Please, no wagering!