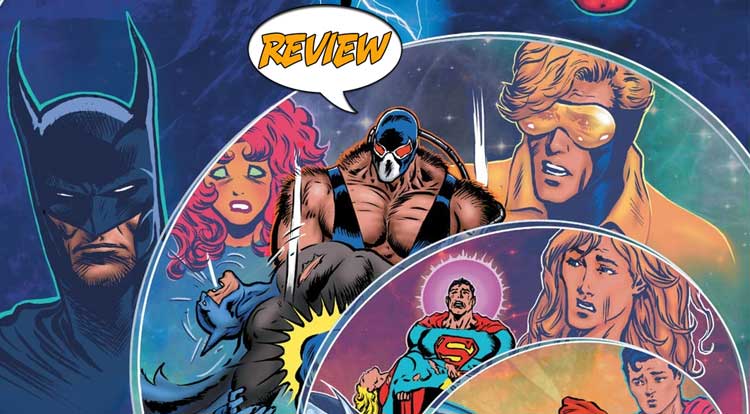 Eight heroes.  Nine decades.  One desperate fight to save all reality.  Your Major Spoilers review of Generations: Forged #1 from DC Comics awaits!

Previously in Generations: Forged:  Dispersed through time by the villain Dominus, our ragtag team of generational heroes (featuring 1939 Batman, Kamandi, Superboy, Steel, Starfire, Sinestro, Booster Gold and Dr. Light) must find a way to restore the timeline… and what they ultimately discover is something far, far greater.

In an extracted bit of time, Dominus has built the perfect home and the perfect life with his perfect family.  His only concern is the whereabouts of his time-refugees, spread throughout reality.  On Krypton, Starfire, Kamandi and Doctor Light are being held by General Zod, while Superboy and Steel are trapped on prehistoric Thanagar, Sinestro, Booster Gold and Batman are trapped in OMAC’s future reality.  There’s a lot of fighting, as Dominus has sent his own agents into time to find the missing heroes, leading to a lot of random fighting.  Finally, the group allies with their attackers (including Major Force, The Ultra-Humanite, Knockout, Artemis and OMAC himself), finding Dominus in his hidden area and fighting some more.  As the issue ends, everyone returns home, but Waverider takes the time to explain to Batman that he will live an extremely long time from his home year of 1939, explaining that he will become one of the greatest heroes of his reality, dubbed The Linearverse.

I have to say, I’m getting confused about DC’s reality.  After Doomsday Clock tried to reforge reality, after Fifth Generation didn’t quite happen, after Death Metal (which literally JUST ended) revamped the reality of the DCU, we are now given the idea of the Linearverse, which avoids it all by saying “Yeah, these guys live a long time.”  It’s pretty much the equivalent of the MST3K mantra, and while I really want to just relax, the multiple attempts to reconfigure the DC Universe since the Crisis on Infinite Earths make it hard to accept this.  Moreover, it’s a confusing retcon for me, since it literally CAN’T be true for large portions of the DCU.  Of course, after 80 pages of LOTS of exposition, senseless fights and word balloons loaded like a baked potato from McAllisters, it also feels like an unearned ending.  The art teams are a big blur for me, as no one particularly stands out (though the closing chapter’s Kevin Nowlan inks give us a really cool looking old-school Batman) in the chaos.  It’s the equivalent of half-hearing a story across a room at a party: No matter how engaging the images wanted to be, they were overwhelmed by the noise.

BOTTOM LINE: THIS GAVE ME A HEADACHE

If you take my bewilderment at this issue’s events and add in the ten dollar price point, and Generations: Forged #1 is the kind of issue that I can’t really recommend on any level, combining a confusing story full of exposition with dozen varied artists and an ending that just seems more complicated than what’s it’s fixing into 2 out of 5 stars overall.  It’s clear that the intentions here were good, but the final product feels like it’ll almost certainly be retconned away sooner rather than later.

In an attempt to make sense of continuity, we're given another explanation that combines Hypertime with a handwave, all following a big ol' senseless crosstime fighty-fighty. Definitely not worth ten dollar.