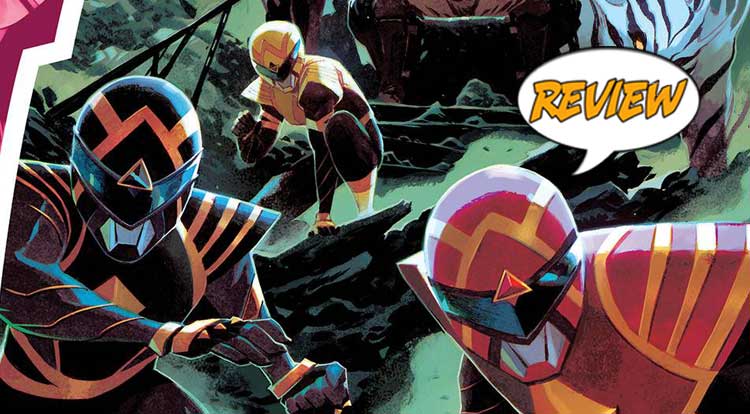 The search for the Empyreal has led the Omega Rangers back to the most dangerous place in the universe…  Lord Drakkon’s eternal prison!  Your Major Spoilers review of Power Rangers #4 from BOOM! Studios awaits! Previously in Power Rangers:  The Omega Rangers and Lord Drakkon return to the new universe that Drakkon created in Shattered Grid.  But will Drakkon choose to save the New Power Rangers from the surprising threat waiting there for them…  or will he betray them?

MEANWHILE, IN ANOTHER UNIVERSE

Specifically, in the universe where Drakkon was trapped after the Shattered Grid crossover, the Omega Rangers arrive in search of the remains of the Red Emissary, killed by Drakkon.  Unfortunately, the sentries left behind to keep him in check (who are all spirit versions of the animals from ‘Mighty Morphin’ Power Rangers: The Movie’, a nice touch) recognize the Omegas as intruders.  The shifting realities have hidden the Emissary’s remains, leaving them to fight and search at the same time.  While Jason finds the body of the strange cosmic being, Drakkon angrily defends his choice of false realities, allowing Zack and Trini a glimpse inside his head, whether he likes it or not.  Barely escaping, the team manages to reassemble the body, only to find a piece missing.  Worse still, they have to put down for repairs in one of the worst hives of scum and villainy imaginable: Planet Onyx!

Once again, Parrott delivers remarkable subtlety in the script, making it unclear whether Drakkon is playing the Rangers or genuinely softening in their company, and it works for me.  It’s not a plot point that they can keep pulling off forever, but four issues in, it has slowly become clear that Drakkon is more than he seems.  This issue’s art is good as well, with Mortarino especially making the battle sequences work.  The last couple of pages of the issue take place in a monster-filled, dark bar, and it’s truly good-looking work.  The downside of the visuals for me comes in the over-the-top madness in Drakkon’s facial expressions, but even that is a matter of taste.  The last-second spaceship escape is also well done, making for a well-rounded issue.

I’ve gotten a little confused keeping the two strands of Power Rangers continuity straight, but Power Rangers #4 is a solid single issue of comics, developing Drakkon as a character while playing off the three Omega Rangers in ways that illuminate both sides of the equation in interesting ways, earning 3.5 out of 5 stars overall.  I don’t know if I’d recommend jumping on here, but if you can get the first four issues of this book all at once, you’ll have an entertaining chunk of Power Rangers story to keep you busy for a while.

Now, how long before he becomes Omega Green?

Drakkon and the Omega Rangers get to know one another a little bit better, but they all nearly die in the doing... A good issue overall.