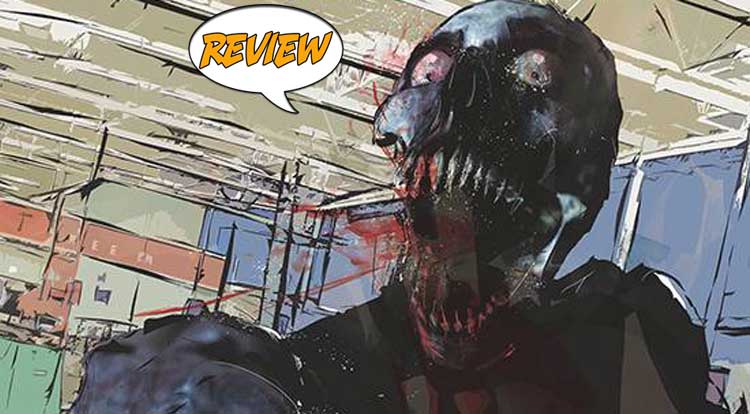 Sometimes, shopping is war.  And war is hell…  Your Major Spoilers review of Black Friday #1 from Scout Comics awaits! Previously in Black Friday:  Black Friday is the biggest shopping day of the year.  Millions of Americans pack the aisles of retail outlets all over the country battling for the best bargains.  While an unlucky clean-up crew deals with the aftermath of the latest Black Friday frenzy, they discover that years of pent-up negative energy has released something very evil and dark into their superstore, which is just the way corporate wanted it.

SALES BRING OUT THE WORST IN PEOPLE

We start with a puddle of blood in the middle of the night…  like ya do.  Javi and Ceci, two Star-Mart employees, discover it in the middle of the aisle during the cleanup from Black Friday.  Ceci is fascinated, immediately remarking that something feels strange, while Javi just wants to finish up and get home.  More people arrive and it becomes clear that their discovery is on the site of a murder the previous year on Black Friday, and their investigation leads to a pile of dolls left over from the previous year.  Joined by their manager and another employee, Javi and Ceci move aside the dolls to find a horrific sight underneath…  and something coming up from below.

This issue moves in fits and starts, with Javi discovering the blood on page one but not actually getting to look at it until page five, with a lot of exposition in between.  There are a number of moments where the story stops dead to explain a bit of previous continuity or introduce a new character, and the revelation that there is a hole in the floor that seems to lead to hell is truly unclear, both verbally and visually.  The art is oddly fascinating in this issue, with moments that remind me of Kyle Baker, John Layman and even Bill Plimpton hidden in these pages, but there are also enough problematic storytelling moments that pull me away from that. Even so, it’s got some fascinating visuals among the inconsistencies, and the final page is a successfully terrifying “To Be Continued” moment.

BOTTOM LINE: IT HAS ITS MOMENTS

All in all, Black Friday #1 is clearly the work of relatively new creators who are still putting it all together, but the premise is intriguing, the art is interesting more often than not, and even the strange stutter-step pacing leads to a climactic moment that works for me, earning 2.5 out of 5 stars overall.  I’m not sure that I’ll be back for the next issue, but I’ll absolutely be willing to read the inevitable trade paperback collection when it becomes available, if only to see these creators grow issue-by-issue.

There's something fascinating about this art, but the story's build and pacing are distracting and staccato, making for an odd reading experience.