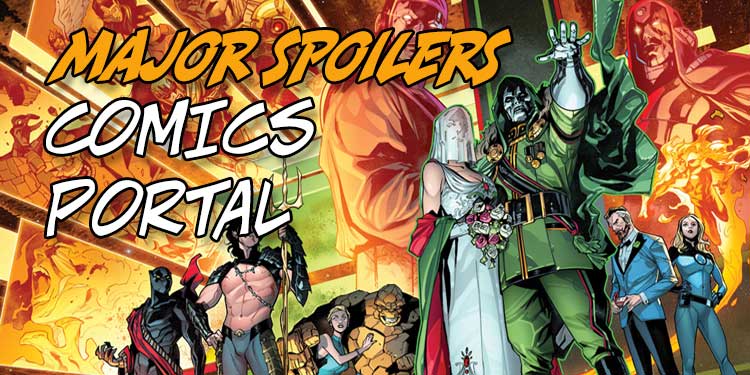 The Fantastic Four, whom I have always called Marvel’s “first family,” are celebrating 60 years in storytelling in 2021! That’s a big one! Marvel recently sent out a news release with some important info about the FF’s 60th anniversary, and that includes the following paragraph:

The Fantastic Four, the very Super Heroes that kicked off Marvel Comics’ Silver Age, are celebrating 60 incredible years! Home to concepts and characters that revolutionized comic book storytelling, Stan Lee and Jack Kirby’s beloved creations have enjoyed one of the most memorable sagas in comic book history. Now, get ready to see what’s in store for Marvel’s First Family this year in all-new teaser artwork by Valerio Schiti. This epic piece foreshadows the Fantastic Four’s action-packed year, giving fans a hint at the deadly threats they’ll be facing and a first look at an unexpected new arc that kicks off in May!

The most interesting thing taking place in 2021 (at least, so far) is the widely publicized marriage of Doctor Doom. This makes sense since many of the FF have already tied the knots—except the most eligible bachelor, Johnny Storm. Oddly enough, the word “Future” in the phrase “The Future of the Fantastic Four begins in 2021” is surrounded in flame. Does that mean a change for Johnny? Could be!

There’s a paragraph from Executive Editor Tom Brevoort that includes some intriguing phrases in it:

Right now, what we know for sure is that Doom’s nuptials are to take place in May. What this has to do with him joining the Guardians of the Galaxy has yet to be revealed!

The one thing I have always loved about the Kirby version of the FF was the creative landscapes the team would happen upon, like the Mole Man’s subterranean locale, the Inhumans’ home, and other interesting and unusual places. I wish we’d see much more of that, honestly!

NICE THAT THEY GET A CELEBRATION! I’m old enough, believe me, so I remember that debut issue that came out in the 1960s. Their origin story, which has been switched and swiveled a lot since then, still rings best from that first appearance. The notion of their personalities being the cause of their powers still doesn’t sit right with me. Oh, well!

The FF has been through some tough times over the years. The thing that often makes me worry is the “status quo changes” that Brevoort is hinting at. I mean, the FF has had several roster changes over the decades, and that includes taking out every single member at one time or another only to have them replaced by everyone from Wolverine and Spider-Man to Medusa and Crystal from the Inhumans to Luke Cage, Nova, She-Hulk, Ms. Marvel, Ant-Man, Storm, Powerhouse, Flux, Black Panther, and Namorita, among others.

Whenever the roster changes, it never really works for me. Again, I always think that if you want to make a significant alteration to the team, maybe you aren’t the one who should be writing the book! I’m more interested in what you can do with the original FF than if you want to have a revolving membership door. If you want to make related teams like the Future Foundation, I’m less bothered by that.

Probably one of the lowest points in FF history didn’t happen in the comic. Instead, it took place on the 1978 animated show featuring the FF. Luckily, this show on ABC only had one season.

What I’m referring to is the fact that the character rights for the Human Torch were tied up in a proposed TV pilot movie. So, instead the team gained a robot member called H.E.R.B.I.E. (Humanoid Experimental Robot, B-type, Integrated Electronics). The robot, on many levels to me, was reminiscent of Bat-Mite, a little silly and often an impediment to resolving the plot in the first 10 minutes of the episode. Just the name made me cringe!

I was intrigued to find out that Ted Cassidy, maybe best known as Lurch in The Addams Family, Ruk in the Star Trek episode “What Are Little Girls Made of?” and Bigfoot in The Six Million Dollar Man, voiced the Thing and the Mole Man.

Then, too, when a Fantastic Four movie was being developed by someone other than the Marvel cinematic people, the House of Ideas washed their hands of having anything to do with it. Although I never saw it admitted to publicly, I believe the monthly comic was cancelled so it never supported the film. The movie was indeed a flop, and I understand the rights to the FF have gone back to Marvel now.

Eventually, the FF comic returned to the stands, although in my opinion it got off to a very slow start since none of the team was in the first issue, as the Impossible Man happily pointed out.

Since then, though, even my critical friends have said it’s doing better! It’s not my favorite Marvel title, but it’s okay by me.

My favorite FF story was written by Mark Waid, and it had to do with Doctor Doom casting aside science to attack the FF with magic, something his mother used well. Poor Reed! He couldn’t make heads or tails of that at the beginning! One of the things I’m most looking forward to is the Mark Russell-penned Fantastic Four: Life Story comic that delves into their origin and 60-year history more. Mr. Russell always has some great insights he brings to his comics, so I’m going to be fascinated to see what he has in mind for the FF.

He said the following in a Marvel news release:

“What I’ve always loved about the Fantastic Four is how it reduces the cosmic struggle of human survival to the scale of a family squabble while treating personal relationships as a matter of truly galactic importance,” Russell said. “Weaving their story and their world into our story and what’s happened in our world over the last sixty years was an important reminder to me of how smart it is to approach life like that.”

The one thing that hasn’t happened for very long, if at all, was giving Ben Grimm the ability to transform from a rock-covered humanoid to a human being. I get that he’s a tragic character and all, but it would be great if super-genius Reed Richards could figure out a way to make that happen at least for a little while a month or something! Sheesh!

And people often forget that Sue didn’t have the ability to generate invisible force fields in the very early days. That came along when they discovered that being invisible wasn’t all that helpful when it came to hand-to-hand combat, especially if that bad guy had an acute sense of smell!

Johnny has been the least tragic of the team since he can control his abilities and “flame on” even when he doesn’t yell out that phrase. It would be interesting to see him and Ben switch control of their powers, and by that I mean Johnny stay aflame all the time while Ben could turn off his rocky outer shell a lot. That would interest me, anyway!

The character I’m always bothered by is Reed Richards. Apparently, in Marvel comics, a super-genius isn’t one who can maintain his or her grasp on reality too very long. Something close to that was when Hank Pym was turned into a wife beater. Genius doesn’t mean hero, at least not for very long. These days, Reed seems to be less heroic and more like a crazy (or at least off-center) guy when it comes to making decisions. I don’t think smart should mean losing touch with reality like that! If anyone should NOT be like that, it’s a genius who should be able to tell right from wrong!

The Richards kids don’t necessary interest me, either. Franklin has turned into a galaxy creating child, which doesn’t grab me much. Honestly, having normal kids would have been much more intriguing to me. Imagine being a genius who had to communicate with less-than-genius kids. That could be something I’d like to see!

Anyway, the most human of superheroes, the Fantastic Four, are getting a big celebration for telling 60 years of stories! As long as they keep the main four members on the team and find intriguing things for them to do, I’m a happy guy!

What do you think? Do you continue to read the FF comic? Do you want them to become part of the MCU? What would you like to see the FF do in the years ahead? Whatever your opinions, be sure to share your thoughts in the space below!