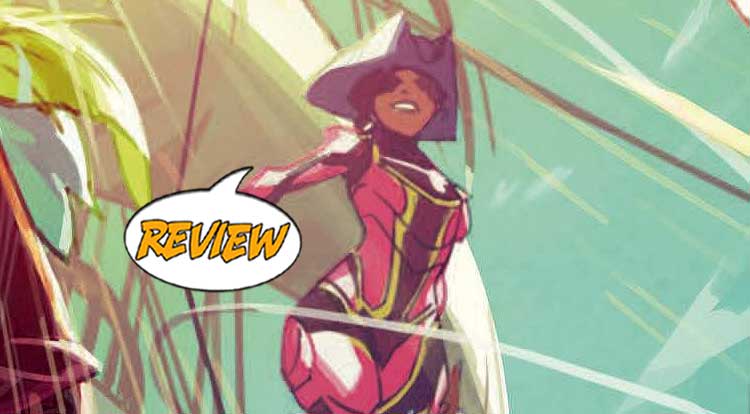 The Champions are on the run from the US Government.  What better time to take a boat trip?  Your Major Spoilers review of Champions #4 from Marvel Comics awaits! Previously in Champions:  Avast, ye!  CHAMPIONS ON THE HIGH SEAS! Nova, Ironheart, Spider-Man and Ms. Marvel have narrowly escaped C.R.A.D.L.E. for now with the help of their old teammate, but it’s out of the frying pan and into the… ocean?

THE RETURN OF AN OLD FRIEND

After last issue’s dramatic return of a founding Champion, things are looking up for our team… until Cyclops lets the other shoe drop.  He can’t actually offer the Champs asylum in Krakoa, as the mutant council refused his request.  In fact, he’s broken the rules even saving them, but sometimes friendship trumps authority, as the Champions find out when he delivers them to Kitty Pryde’s pirate ship.  Along with The Marauders, the young Champions finally have a chance to get some rest and think about their situation, including Ms. Marvel, who spends the entire night doom-scrolling social media to see the response to her team’s actions.  As the government redoubles their efforts to capture the team (specifically for the optics of the situation, cynically), Cyclops reveals that Viv Vision is the one who has been leaking the team’s location.  As for Viv herself, she has an epiphany in Kansas that sends her off to find her former teammates… this time, to help.

HAVING AN “IMPORTANT FEELINGS” MOMENT

As much as I miss the larger team (especially The Locust and The Wasp), this issue’s focus on the core team, minus Amadeus but plus Ironheart, really works for me.  Nova and Ms. Marvel get a really impressive character interaction together, while Ironheart observing the Marauders in action leads the whole team to an important realization.  The art isn’t always my favorite, as Quinn has some similarities to the style of Humberto Ramos, but it’s always got clear storytelling and each of the members is well-defined.  There’s even a lovely visual moment where the X-Men question Cyclops about his costume, and he reveals that he’s wearing his old Champions uniform for old times sake.  It’s a sweet moment in an issue filled with some nice character moments, and even if we never get Cyclops back, it’s nice to see him acknowledging his old friends.

In short, Champions #4 is a strong issue that finally gives our heroes a little bit of a break, only to have them decide of their own accord to leap back into the jaws of danger, with strong art and strong character-driven plotting pulling everything together for 3.5 out of 5 stars overall.  If you’ve lost track of the team (or if the endless ‘Outlawed’ crossover has alienated you), it would easily be worth your time to jump back in to the new Champions era.  Here’s hoping that C.R.A.D.L.E. gets dismantled sooner rather than later.

It's an issue much better than the pseudo-crossover that it's tying into, and one that delves a bit into the various Champions, including Cyclops. That said, 'Outlawed' can't end too soon.