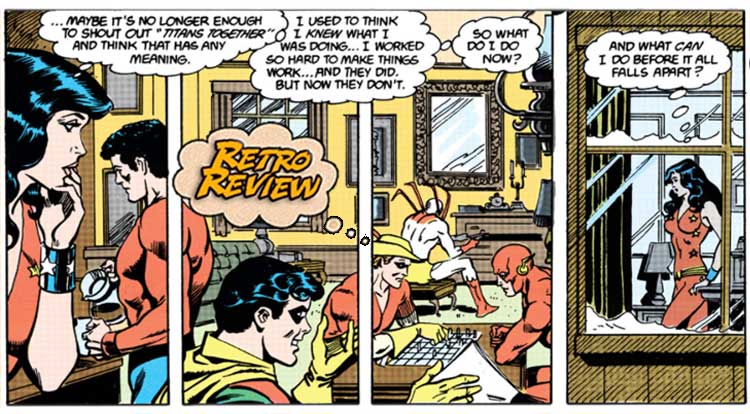 Previously in New Teen Titans:  This one is brought to you by the ‘Titans’ TV show’s arrival on HBO Max, and their portrayal of Donna “Wonder Girl” Troy.  The events of the second season reminds me of another time that the team was left in flux and in crisis.  In the wake of a number of grave losses, the Teen Titans have gone their separate ways.  Starfire has returned to her home planet and wed, Raven has gone missing, with Nightwing searching the world for her.  Jericho has left with his mother to help her launch her new company, while Cyborg and Changeling (Beast Boy these days) are on the trail of the mad Steve Dayton, Changeling’s step-dad.  Only Wonder Girl remains to deal with the murderous Cheshire, and she has a few ideas on how to get back on track. This issue is part of the second volume of Teen Titans, which was taking place a little bit in the future of the regular continuity of the original book, renamed Tales of the Teen Titans.  It was on deluxe paper, using the new printing process, and launched with much fanfare in 1984.  As for Wonder Girl, the last Titan standing, her New New Teen Titans are, in the strictest sense, the old Teen Titans, bringing founding members Aqualad, Speedy and (Kid) Flash back, along with former member Hawk.  Oh, and one more member, one who wears the costume of a founder, but is a different kettle of feathers indeed. This issue is a bit of an anomaly when it comes to Jason Todd, in that it IS post-Crisis On Infinite Earths, but the stories that would redefine Jason as a snarky tough kid from the streets are as yet unwritten.  This Jason is very much like the Pre-Crisis version, a carbon copy of Dick Grayson who is more than a little starstruck at getting to hang out with the big-time heroes of the Titans.  It’s a little odd, but for those of us who were reading DC books from ’86 to ’88, it’s pretty much par for the course, as many little course-corrections were occurring as the new reality sets in.  Worse still, Wally West is still just a few days past seeing his mentor killed, having his speed reverted to a fraction of its former self and taking up Barry’s mantle, and…

He’s not quite The Flash that he wants to be. As for Hawk, the death of his brother has left him an angry pre-Guy Gardner archetype who wants to “kill some commies” and believes that, if Reagan asked them to take on Cheshire, then he was gonna give the Gipper his best.  This leads him to take harsh actions in the field, taking a gun from an opposing soldier and placing it to his head, much to Wonder Girl’s dismay.  Struggling with leadership, Donna accidentally hits on the perfect to manage a loose cannon like Hawk, smacking sense into him while releasing her rage at seeing the Titans fall apart once again.  “I don’t LIKE being leader, Hawk!  I don’t like it!”, she cries, reminding him that his chaos-powered strength isn’t quite up to the level of an Amazon princess. When Robin stops her from crushing Hawk with her powerful Amazon fists, Donna stomps off, tell him to lead the team, but Jason steps up for the first time, informing Donna that he’s just a kid.  The Robin she wants isn’t Robin anymore, the Teen Titans she’s trying to recreate are gone, and this team, for good or for ill, is hers to command.  Thus, it’s the clear-headed thinking and emotional openness of Jason Todd that saves the mission.  Don’t get used to hearing those words in that order, as it never happens again in the history of the DC Universe after this issue.  As for Speedy, he’s not thrilled about their target, for reasons he won’t discuss… …until she spills the beans: Speedy is the father of her child!  Thus, in her haste to rebuild what she remembers from her youth, Wonder Girl has managed to created the absolute worst possible team, with a hothead, a literal child, a despondent Atlantean, a blood-crazed nationalist, a young man trapped in the shadow of a lost father figure and the one hero in the world who doesn’t actually want to bring their target down, thanks to their shared offspring.  It’s pretty much a perfect storm of bad leadership, with makes New Teen Titans #20 a fascinating look at a transitional period not only for the Titans, but for the DC Universe at large, earning 4 out of 5 stars overall.  It’s a chaotic issue that still holds together, and reminds us that even Jason Todd has been around long enough to go through multiple universal iterations, even though I still think of him as the “new” Robin.

Barretto and Tanghal are the first team to take on Perez' NTT team and make it work with their own style, while Wolfman makes the best of a team full of bad choices, building a truly engaging team. It's a remarkably good issue.