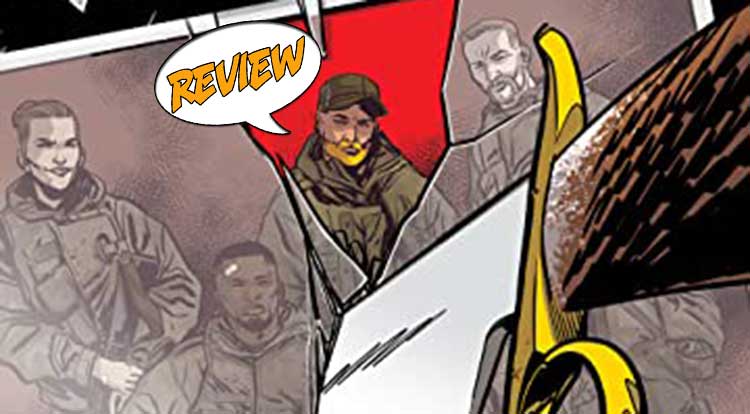 In Stillwater #6, Daniel West has been the town’s enforcer and protector for decades. We see him protecting its dirty little secret, until he encounters his old marine sergeant, and his scruples. What bloody mayhem follows? Find out in your next mighty Major Spoilers review! Previously in Stillwater: No one dies who lives with the town limits of Stillwater, a place that doesn’t exist on any map, anywhere. But in the modern day, that’s becoming increasingly hard to maintain, to keep outsiders out. Resident Daniel West is tasked with disposing of interlopers, but it is increasingly hard to do, and when he clashes with his old marine sergeant, his situation, and Stillwater’s, becomes untenable.

Smalltown America is full of hidden, dirty secrets, which makes them great fodder for fiction of all stripes. From ‘Twin Peaks’ to ‘Blue Velvet’ to ‘Salem’s Lot’ to a substantial portion of ‘The X-Files’, smalltown America has long been the dark underbelly of the American dream.

So, Stillwater has been mining great material over this first arc of the series – the opening issue is a masterclass in brooding tension as two strangers find themselves trapped, then disposed of, by the town’s inhabitants, eager to keep its dark secret. Stillwater #6 continues in that tradition, as it glances back at protagonist Daniel West’s efforts to maintain the secret. But while Daniel has blood on his hands, some in the town have decided that maintaining the secret is too great a sin to bear. A vote is forced, but the Judge, who has ruled with an iron fist for decades, overturns it, with violent consequences.

Chip Zdarsky depicts Daniel’s mental disintegration deftly in Stillwater #6, flashing back to 1999 where we see an idealistic figure eager to do his duty and protect the town’s secret. But the cost has become too much, and while he kills to order, the emotional toll is becoming too much. His chance encounter with his old Marine sergeant from the invasion of Grenada offers an opportunity for some sort of redemption of Daniel, but is it too late?

Elsewhere in Stillwater #6, artist Ramon Perez and colorist Mike Spicer bring their ‘A’ games to the issue. Perez lays out the art impeccably, making good use of ‘panel in panel’ to give the story momentum. He also mixes his artwork to suit the scene – there’s an authenticity to the Marine guard salute at a veteran’s gravesite, then we see a looser, more wild series of panels as Daniel strangles a man the Judge doesn’t want to visit Stillwater. Spicer provides a toned down palette, even during the scenes of devastation in Stillwater. It would be easy to amp up the colors to make the gore and violence more vivid, but maintaining restraint adds a level of plausibility and realism to otherwise extreme events.

Stillwater #6 ends on a cliffhanger, with a lot left unresolved. It’s a confident writer who sets the stage so carefully, as Zdarsky has in this first arc, only for him to basically sweep the board and start again. It feels a lot like the intense focus on Stillwater itself will broaden its viewpoint in issues to come, and that can be no bad thing.

BOTTOM LINE: PUTTING THE PEDAL TO THE METAL

Zdarsky continues as he sets out, holding true to the central tenets of the series in Stillwater #6. There’s a take no prisoner’s vibe to it, and a willingness to upturn the apple cart in the service of maintaining the headlong speed of the action.

Stillwater #6 is the end of the first arc, with the town of Stillwater consumed by anarchy and violence as the Judge puts his foot down with cataclysmic effect. But there are enough story threads left dangling that indicate Zdarsky has more up his sleeve for this hidden town of immortals.