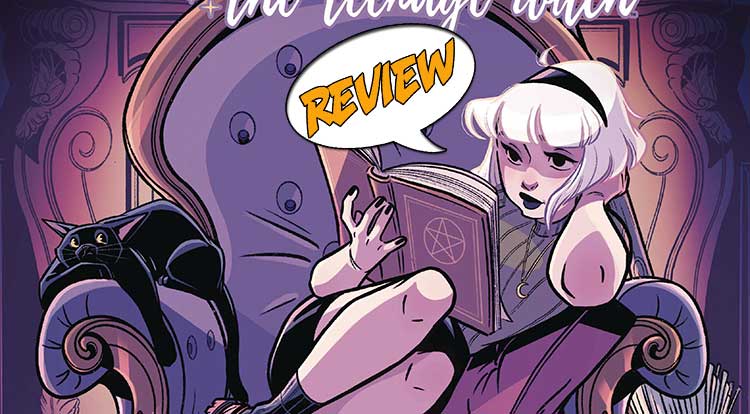 Deep in the woods, trapped, and cut off from her magic – can Sabrina take on Della and stop her murders? Find out in Sabrina: Something Wicked #5 from Archie Comics!

Previously in Sabrina: Something Wicked: Sabrina tries to keep her social life in balance as her magic affects the people around her. Ren and Radka are no longer a single Wendigo, but they do now have antlers and horns. Sabrina uses her magic to fix this, at least temporarily, and they tell her about their visions of a house in the woods where their mother is, and sometimes a beautiful witch. The three of them go into the forest together and find the house. Sabrina wants to explore inside, but as they get close, they are grabbed by tree branches, and Della steps out…

A WITCH’S COTTAGE IN THE WOODS

As Sabrina: Something Wicked #5 opens, Sabrina, Ren, and Radka are magically restrained in Della’s cottage as she regrets that Sabrina and her aunts won’t join her in whatever plot she has. Out of the blue, Sabrina accuses her of killing people and draining their life energy. It’s a lucky hit – that is what Della is doing, and Sabrina is next on her list.

Sabrina can barely wiggle her fingers, but she tries to get Ren’s and Radka’s attention by doing just that and making funny faces. She then talks loudly about how the two teens can turn into a Wendigo any time they want to. This is news to them. On the other hand, Sabrina did cast a spell on them a while back.

Della continues to monologue, and it turns out that Ren and Radka’s mother was a witch whom Della cursed. She was thorough enough to make sure the curse passed down to her children. Della really is evil. But they take Sabrina’s hint, become a Wendigo, and free Sabrina. They attack Della as well, but their strength is no match for her magic. Meanwhile, Sabrina digs through her backpack, pulls out a deck of cards, and challenges Della to Darkest Savoire Faire.

Della accepts and moves the group out into the woods away from her cabin. She doesn’t want any stray magic to do damage to it, after all. The witches enter a magic circle, and a battle of cards, magic, and wits begins. Della is quick and powerful and rapidly gets the upper hand, but Sabrina has the idea to call upon the spirits of those Della killed. That is enough to get Della trapped in one of the game cards, which should keep her out of trouble for a while.

And now Radka knows what happened to her mother and is starting to come to grips with the curse, although Sabrina may be able to help them with that. And finally Sabrina can go home and tell her aunts about what she’s been doing lately. If they’re at home, that is.

Sabrina: Something Wicked #5 has really solid art. There is a lot of magical stuff that happens in this issue. Della’s cottage has a very old-fashioned witch vibe to it right down to the cauldron over an open fire pit. It’s hard to tell where trees leave off and walls begin, because they merge together. Even the color scheme is sinister featuring a poisonous yellow-green throughout much of it. It has as almost as much character as any of the people. And I respect how cool and nonchalant Della is through all of her conniving.

The battle of Darkest Savoire Faire is imaginative and full of action. The cards are not tarot cards, but are reminiscent of them, except that when they are invoked, something manifests within the magic circle. The drama is tangible, and the lettering and sound effects add so much. I love the facial expressions, both Della’s confidence and Sabrina’s determination.

BOTTOM LINE: THE UPS AND DOWNS OF A WITCH’S LIFE

Sabrina: Something Wicked #5 is exciting and a great resolution to this arc. I like that Ren and Radka actually have a story that ties into the plot at large, and it is fun to see Sabrina stretching her skills and seeing how powerful she is becoming as a witch while still being awkward teen.

Della is the serial killer, and Sabrina is the only one who has a chance of taking her down!