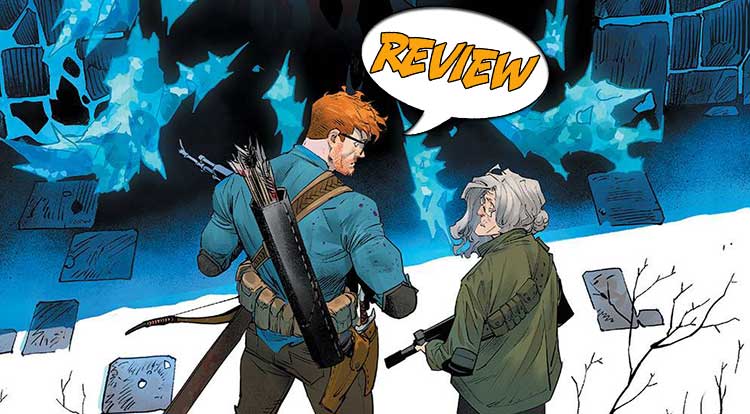 Once and Future #16 Review

Arthur has tried to return before, but an unusual number of other stories are coming into play this time. Will we find out who or what is behind it all? Find out in Once & Future #16 from BOOM! Studios.

Previously in Once & Future #16: Duncan, Bridgette, and Rose are trying to track down who Elaine’s “Lancelot” is. After a run in with the Green Knight, they split up and Rose finds herself face to face with Mary/Elaine/Nimue (also Duncan’s mother). She talks about becoming Elaine, who met Lancelot when he rescued her from a cauldron of boiling water. Yes, she re-enacted this, as Duncan and Bridgette discover, and she met the real Lancelot in the Otherworld. Elaine wants Rose to tell her more about what Duncan and Bridgette are up to. Rose will not talk. As Elaine prepares to kill her, a flash grenade goes off.

LEGEND AND GOVERNMENT, FACE TO FACE

Once & Future #16 opens in the Otherworld with Arthur impatiently asking Merlin when he can ride out. The plot is so intricate that we occasionally lose sight of the fact that Arthur, Merlin, and Galahad are up to something. Meanwhile, back in the Grail Castle, Lancelot chases Duncan and Bridgette, demanding to know where Elaine is. Bridgette drops the bombshell that whoever she was, she was not Guinevere.

Back at Rose’s flat, Hempleworth’s men chase Elaine as the man himself accuses Rose of causing far too much trouble. He is technically her government overseer. There is one family who takes care of dealing with the supernatural trouble (presumably Bridgette’s), and one government official who knows, and gives them resources. There’s been a lot of activity lately, and suddenly it is audit time.

Bridgette and Duncan find themselves between a shouting Lancelot and a sleeping dragon. Elaine is looking for an escape from Hempleworth’s men. She calls to Merlin and he provides – a tub of boiling water. This gets her away, and her screams as she arrives in the Otherworld distract Lancelot from his chase as well. Bridgette tries to puzzle out why all these stories are acting up now.

In Rose’s flat, there is suddenly the strange light that we have learned to associate with the opening of a portal to the Otherworld. Hempleworth acts quickly, ordering his men to secrecy for whatever they may see. (And this is where we find out that one of these men was placed here by the Prime Minister as his own spy, and suddenly the plot becomes even more complicated.) Hempleworth gives Rose the key to the flat from where they’ve been spying on her and orders her to keep low.

But Lancelot is not the only knight who hears Elaine’s screams. Merlin says they are the screams of Nimue, and only the greatest knight can save her, and come back with the Grail, and sends Galahad after her. And everything seems about to converge!

A PLAY OF LIGHT AND COLOR

The art of Once & Future #16 continues to fascinate. The color scheme of the Otherworld is now instantly recognizable, and this was brilliantly set up to allow for scenes such as when Elaine opens the portal in Rose’s flat. The imagery is stunning. There are imaginative panels that speak volumes, such as when we see Galahad in the Seige Perilous. It has transmuted from a spiky, bony throne to something overgrowing with lush, green plants, and Galahad is part of it all.

The scene in Rose’s flat is movie-worthy. I love the contrast between the conversation Hempleworth has with Rose which is mostly civil, although he does hold a gun on her while they speak, and his men. They are using silencers, but there is a lot of gunfire. These are men dressed for urban warfare. If they’re part of the secret organization that keeps an eye on Bridgette’s family, who knows what all else is part of their weaponry. But will they be prepared to handle the Otherworld?

Once & Future #16 is finally drawing some threads together after letting things run wild across England, and I like the way things are coming together. Although I suspect this would be confusing to anyone who has not been following along from at least the start of the arc.

So many schemers manipulating stories around the return of King Arthur…