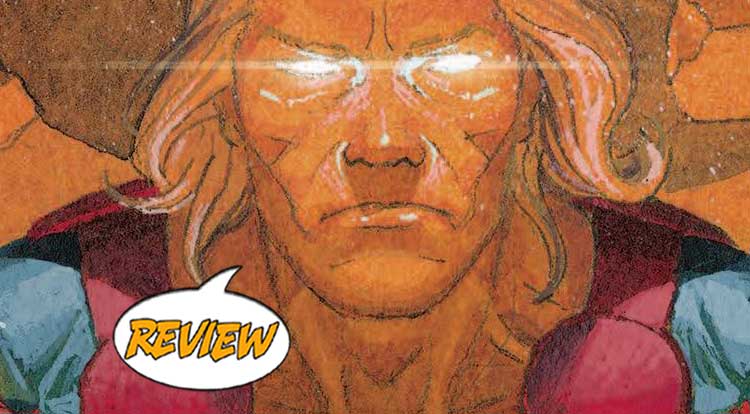 An Eternal has been murdered.  Does Thanos hold the key to the mystery?  Your Major Spoilers review of Eternals #2 from Marvel Comics awaits!

Previously in Eternals:  Eternals live eternally.  One is dead.  They handle it well.

No, they don’t.  They handle it badly.  Eternal revenge is a dish best served forever.

In the ruins of Titanos, where time itself runs mad, Ikaris has come face-to-face with his mad “cousin,” Thanos, the son of the Eternals of Titan.  They immediately fight, both being creatures who enjoy doing that, smashing their way through time and space as they battle.  When Thanos tears Ikaris’ head off in triumph, he realizes that he’s been fighting an illusion, and that Ikaris and Sprite have escaped.  The story then takes a moment to explain the story of a young man whom Ikaris sought out, searching for a monster, who then spent his whole life waiting for the Eternal to return, only for Ikaris to realize he had made a mistake too late.  It’s a strange moment, but the narrator (Earth itself, natch) explains that it is a necessary side-trip.  Back on Olympia, Druig interrogates the returning Eternals, recommending that they wait for Zuras to return.

That’s when Phastos arrives to tell them that the resurrection facilities have been destroyed, and the Prime Eternal is going to stay dead.

SHOULDA GONE FOR THE HEAD

First of all, this comic is truly impressive work, from the narration (which is wonderfully dry and witty) to the story itself, which inverts everything we just learned about The Eternals in the first issue.  I remember reading that story and thinking that it didn’t really feel Gillen-y, but seeing what was in store here, now I understand.  The premise that the world itself is broken, allowing the battle to travel through time is a beautiful one, and when it ties into the primary storyline so seamlessly, it reminds me how good Gillen’s plotting can be.  Ribic does a wonderful job with the art, giving the characters a classical feel: Ikaris looks like a Greek statue, Sprite like a mad imp, Sersi like a dangerous wicked witch.  It’s all really well-done, and I like the appearance of Phastos and Kingo Sunen, who aren’t always central to Eternals stories, making for some fresh perspectives leading into the Eternals movie… assuming that it ever comes out.

In short, Gillen respects Kirby by making sure that this doesn’t feel like just another superhero comic, and Eternals #2 hits that mark hard both visually and in terms of story, melding both so well that it feels like we’re actually being told a thing that really happened by an entertaining narrator/planet, earning 4 out of 5 stars overall.  I haven’t been this happy with an Eternals comic since the Kirby days.

Gillen understands that The Eternals aren't just superheroes, and the story shows it.

Ribic understands that The Eternals aren't just superheroes, and the art is killer.

This is a good book