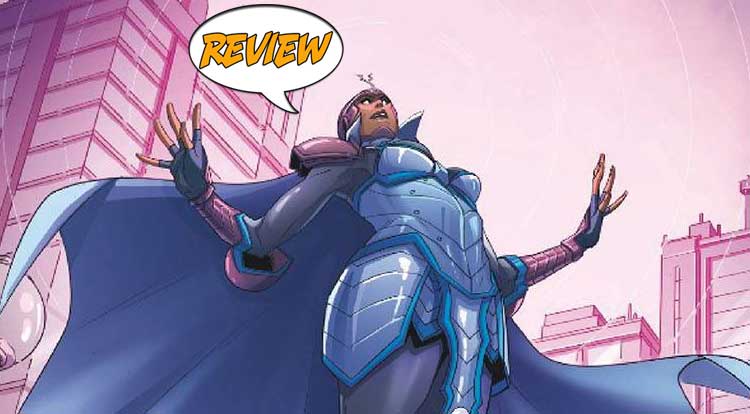 Frontier’s secret is out, and it’s threatening to tear the Crisis Command apart!  Your Major Spoilers review of Commanders In Crisis #5 from Image Comics awaits!

Previously in Commanders in Crisis:  Can Frontier save the Crisis Command after a secret from her past shatters their trust?  As her team struggles to find meaning, vicious attacks mount from new enemies with empathy dead.  Act Two of the event that births a universe kicks off as Frontier faces Thunder Woman, electric inspiration itself!

SENTIENT LIFE IS MALIGNANT TO THE MULTIVERSE

With the concept of empathy dead, the world continues to spin down into chaos: First responders take their time, friends and family attack one another, and even the governments of the world add to the problems.  Senator Nelson Next continues to destabilize the world, while the Crisis Command deals with the fact that their leader has been lying to them from the start.  Prizefighter distracts himself with combat and glory, while Seer and Sawbones find a way to calibrate their powers tantrically, and as for Frontier herself, she finds that no one will respond to her.  As for Originator, she finally captures the villainous Social Caller, who has been killing its way across the nation, while Frontier’s counterpart (the architect behind all their misery) continues to plot her revenge.

Perhaps my favorite part of this series is how much it feels like the comics I grew up reading, with multiple plot threads in play and multiple characters all doing their own thing.  It reminds me of Wolfman/Perez Titans or the Byrne run on Fantastic Four.  It has the advantage over those stories, though, in that it can touch on themes that those stories couldn’t, with Prizefighter flirting with his new reporter friend in public and a pretty graphic sex scene between two of our heroes.  Tinto’s art makes every page interesting, from debating to fighting to boinking, and the story-telling really is top-notch throughout.  My only real complaint about the issue is a little bit of unclarity about timeframes during the middle of the tale, and even that is easy to overcome once you read on.  Orlando truly loves the art form of comics, and while there’s a clear agenda to the story, it works perfectly with the superhero narrative, elevating both parts into something greater.

In short, it’s probably my favorite comic book right now, and Commanders In Crisis #5 delivers on a lot of plot and character development without feeling like things have come to a stop, and the last page splash makes it clear that something big and fighty-fighty is probably in the wings, making for an issue that earns 4.5 out of 5 stars overall.  If you’re not reading this one, I recommend that you do, both because it’s great comics and because strong sales could mean more of this story in the long run.

With clever new concepts, powers and superheroes who represent the breadth of the real world, this book should be on your pickup list.