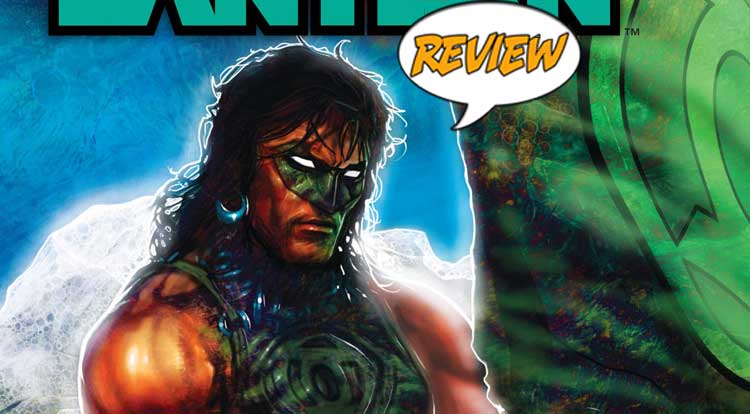 Previously in Green Lantern: Season Two:  Hal Jordan’s future as a Green Lantern is threatened when the Young Guardians’ plans to restructure the Corps move into high gear.  What’s a guy to do but take a vacation?  But when Jordan arrives on the swords-and-sorcery world of Athmoora for some R&R, he comes face to face with the biggest threat the universe has ever known… and a coalition of foes determined to bring his career and his story to its apocalyptic end!

SAILORS ON A SEA OF FLAME

Our story begins on Planet Athmoora, where a group of adventurers face a terrible threat, seeing their numbers overwhelmed one-by-one, until their final member flees to find a friend: Sir Hal of the Green Lamp!  On Oa, that same Hal is dealing with a severe case of disappointment, as the Guardians inform him that their new “restructuring” won’t be including him, and that they have one last mission for him before he is officially put out to pasture.  Hal, for his part, realizes that the restructuring allows his ring a bit of freedom, declaring that they’re both on leave.  He sets out for Athmoora, where he can forget about rejection from Carol, being “fired” by the Guardians, having his bird friends grow up and fly away through the dimensions…   And where he can walk right into a trap.

THE ULTRAWAR… IS STILL HAPPENING

The last page reveal of one of his oldest foes is exciting, but the real fun of this issue is in what it hints is coming: A new era of Green Lantern, including Teen Lantern, Sojourner of the Far Sector and maybe even Kyle Rayner.  It also promises a big blowout ending to Morrison’s arc, something that any self-respecting Grant Fan will expect to be epic.  Sharp’s painted (or painted-style) art is really incredible this issue, especially when it comes the strange medieval D&D-scapes of Athmoora.  The Infernal Sea is gorgeously rendered, but even a quiet conversation with Guardian Saal on Oa is creative and beautiful, hearkening back to my childhood reading ‘Heavy Metal’ and ‘Epic Illustrated.’  Whatever the upshot of the Ultrawar turns out to be, Morrison has created a new era of Green Lantern and finally shaken off the endless variations of wars of Corps we’ve been reading in Jordan’s adventures since about 2005.

It’s always darkest before the dawn, so they say, and The Green Lantern: Season Two #11 makes Hal Jordan’s future look pitch-black, making me look forward to what comes next with excitement and setting up for a big final chapter, earning 4.5 out of 5 stars overall.  If you’ve been with The Green Lantern from the beginning, this is what it’s all been leading up to.  And if you haven’t been, you’ve got about a month to hit the back issues and catch up before it all comes to a head in #12!

Morrison and Sharp take everything we've ever known about Green Lantern and the Guardians, turns it all on its head, and makes it into a pteradactyl, and I, for one, could not be more thrilled. This issue is amazing!