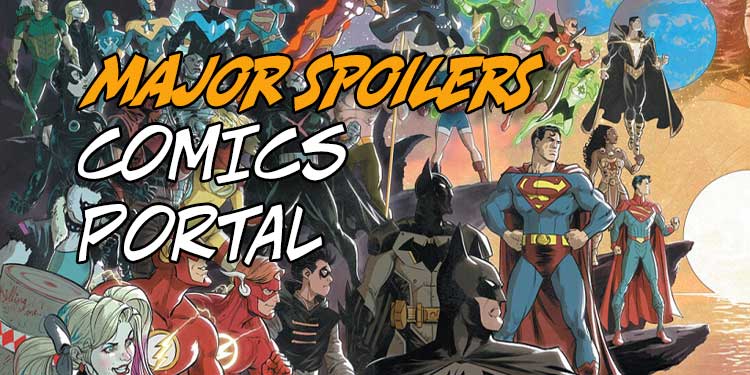 As we slowly find out more and more about DC’s Infinite Frontier reboot, it sounds to me like “anything goes.” And yes, I’m good with that! Now that DC’s Future State is coming to a close (mostly) at the end of February, the company is shifting into Infinite Frontier. While we don’t have complete clarity on it, here’s what we do have from dccomics.com:

With Future State currently offering a thrilling glimpse of the near and far futures of DC’s heroes and villains, fans can’t help but wonder what’s next, and the status of the current DC Universe. That era starts in a big way on March 2 with Infinite Frontier #0, a 64-page one-shot from some of DC’s most innovative creators—setting the stage for new story lines, surprises, and mysteries unfolding over this year and beyond.

If you look at the cover for that book, you’ll see quite the variety of DC characters. It includes the current Batman, Next Batman, Barry Allen Flash, Wally West Flash, Future State Flash, Red X, Blue Beetle (who has been dead a while), the formerly Earth-2 Green Lantern (no sign of Hal), three different Supermen, Black Adam, Harley Quinn, Green Arrow and Black Canary, Nightwing, and several other people (including Damien Wayne, who used to be Robin).

As I look it over, I have come away with the notion that, honestly, “anything goes.” We’ll see. As far as DC storytelling, though, that’s a great thing, I believe!

JOURNEYING TO GET HERE I often point out that I’ve been reading comics for decades now. In fact, the first thing I ever read was a Batman comic in which he was in England, flying around a castle to patrol it. I “fell in,” as Frank Miller described his first exposure to Batman.

Since then, it’s been a bumpy ride.

I remember when Crisis on Infinite Earths began, way back in the 80s. DC was paring down their multiverse so everything was unified into one timeline. I remember talking with the local comics shop owner I frequented at that time.

“Does this mean everything I read before didn’t happen?” “Yes,” he said. “So the comics I bought no longer exist” I asked. “No… in fact, they’ll probably be worth more,” he responded. “Why are they doing this?” I further asked.

His response has stuck with me through time. “Because some people feel continuity is king, and they work hard to keep track of it. If something happens out of continuity, they don’t like it. And they won’t buy it.”

See, I grew up in an era before local comics shops. You had to search for comics in what were then called newsstands on city streets or box stores or even candy stores. Finding a complete run or keeping up with current releases was almost impossible. Each issue had to be a stand-alone story because the buyers (each book sold over a million copies at that time) couldn’t be sure we knew what happened even in the previous issue.

Now, of course, some collectors have complete runs that span decades of buying. Some of them have actually even (gasp!) read them! Unbelievable to some, I’m sure!

It’s now hard to believe that there were towns that did NOT have local comics stores in them in those days. That’s how much the industry has changed.

Granted, DC does reboot every few years. Those number ones will always sell better than number 53, for example. We’ve seen the New 52, Hypertime, Rebirth, and others recently, and Infinite Frontier is their latest rework.

In my opinion, these all take place because continuity, for some reason, has remained king. After a while, the comics need to restart so “new” stories can be told. I truly don’t know why DC EVER drank the Kool-Aid on this strange way of doing business. Around the same time that Crisis was taking place, the House of Ideas, on the other hand, was expanding its own multiverse. I remember reading X-Calibur, and there was a storyline in which the team encountered literally hundreds, possibly thousands of universes in Marvel.

I knew someone who literally hated DC because of its multiple universes, and I sought out his opinion about the same thing happening in Marvel.

His response? “Oh, it’s fine.” “What?!” I responded. “Why is the exact same thing happening in Marvel okay?” “Because Marvel is cool. They can do anything they want.”

I know, I know. I get on this hobby horse every so often. Marvel is the “cool” company while DC “sucks.” “The best DC is worse than the least Marvel.” I’ve heard it all before.

This double-standard, though, really hits me when the notion of multiverses come up. And reboots. I mean, Marvel had Rob Liefeld and his group restart the House of Ideas in “Heroes Reborn,” and it was a hot seller… at least, for a while. It was fun to read Peter David rip holes in this event… he’d never do that now, though.

Even Mephisto’s rebooting of Spider-Man is recounted with a wink and a smile. You can be sure that if Necron did that in DC, why, the screaming would be deafening!

SO, WHAT ABOUT INFINITE FRONTIER? I may be proven wrong (and I often am), but the way I see Infinite Frontier, this “new” approach basically says “anything goes,” and that means that if you read a story from years past that was previously considered out of continuity—well, guess what? It’s BACK, Buddy!

I mean, I’ve had friends point out to me how critical continuity is! For instance, if Batman takes a smoke bomb out of the left side of his utility belt, then a few issues later, he takes one out of the right side of his utility belt, well, that’s proof that DC doesn’t know what they’re doing! They can’t even keep simple details straight, as a friend would often point out to me!

The fact that a story was printed and read and kept for years does NOT mean it didn’t happen! In fact, it makes it MORE real to me!

This is all very Star Trek to me. If an episode slips by that contradicts previous lore, it’s the end of everything! Somehow now, someone has to write a new episode that explains the apparent contradiction.

This is where I often zone out!

See, what I want from a comic that I plunked down my hard-earned cash for is a good story with good characters! I literally couldn’t care less if it is in the continuity of a comic I bought even a month ago. I don’t keep track of the minutia the way some do. If that’s a big deal to you, more power to you! Just not me!

So, I have, for decades now, put up with the continuity keepers who have wretched about apparent mistakes in stories that show the tale couldn’t possibly be in the current continuity. Sadly, you may be in for a rough road ahead if continuity is the most important thing to you! You may leave DC behind (although if you expect Marvel to be truer to decades and decades of stories, you may be disappointed). They cancelled their entire Ultimate Comics line because it eventually became just as convoluted as their “regular” books.

Personally, I’m seriously looking forward to a DC where continuity matters less than good storytelling! Perhaps they’ll lose collectors and some fans as a result, but maybe, just maybe, storytelling will again become more important than where Batman keeps his smoke grenades!

What do you think? Is continuity critical in comics? Is Infinite Frontier a good move on DC’s part? Are you more or less likely to buy DC comics now that Infinite Frontier is coming? Whatever your opinions, be sure to share your thoughts in the space below!