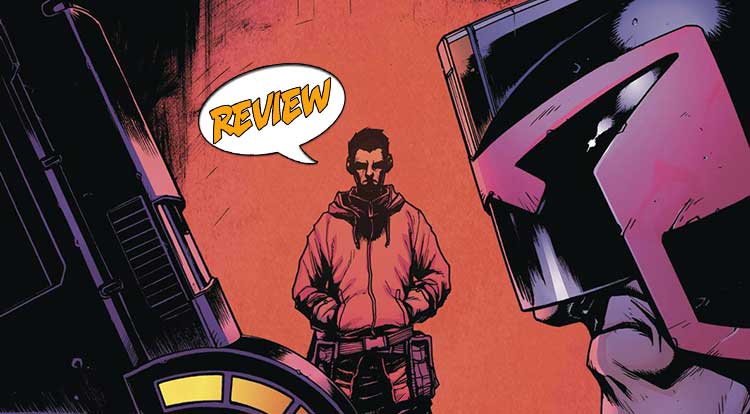 In Judge Dredd: False Witness #4,  Mathias Lincoln is having a very bad day.  Captured by the Judges, his mind ripped open to find its secrets, confronted by the killer of his best friend, and destined for the iso-cubes, can Lincoln bring down a huge conspiracy before it is too late?  Find out  in your next mighty Major Spoilers review!

Previously in Judge Dredd: False Witness: Mathias Lincoln has had a bad life, really.  Procurer of contraband for the rich and famous of Mega-City 1, Lincoln is also a mutant, hiding his secret from the xenophobic Judges.  After discovering  his childhood best friend is Dr Filth, a man who kills mutant children to extract their genes for the benefit of the rich, Lincoln is framed for his murder and goes on the run from Judge Dredd!

Born from the cynicism and violence at the end of the 1970s, Judge Dredd takes its inspiration in part from the Dirty Harry movies – an officer of the law who brooks no challenge, who uses violence as a weapon of first resort, and whose fidelity to justice is unchallengeable.  The moral bankruptcy is there for all to see, of course.

Judge Dredd titles found their inspiration in satire, about policing and police, which we see a lot of here in Judge Dredd: False Witness #4.  References to the practices of Fox News, their audiences willingness to suspend good judgement and eat up the lies and distortions, and the way the Judges treat refugees are all part of the satire that fills this issue.

The running theme through Judge Dredd: False Witness #4 is Mathias Lincoln’s recitation of the Ten Commandments, found in a discarded Bible in the Cursed Earth.  A lot of the commandments he is prepared to discard as having no value in Mega-City 1.  It’s an interesting framing device – a series of orders from God about what people can and cannot do, set against the ultimate permissive society, where, despite the Judge’s best (or is it worst) efforts, the people rise up again and again.

Writer Brandon Easton, who also wrote the Judge Dredd 100 Page Giant, has a good feel for the character, though there is less nuance in the depiction of Dredd in this issue, which might’ve helped given Judge Dredd: False Witness #4 a bit more emotional depth.  Judge Anderson’s empathy is also largely absent in this issue – she’s useful for plumbing the depths of Lincoln’s mind, but little else.  Otherwise, the depiction of Mega-City 1 as a mad house is more or less spot on.  The politics near the end does feel a little heavy handed, and loses an opportunity to go for the throat.  Mega-City 1 is a handy stand in for whatever the current writer thinks is wrong with its inspiration, the United States.  We live in a time when the US has never been more polarised, with politics never more cynical or exploitative and the people ripe for revolution.  There was a rich vein that could’ve been mined in Judge Dredd: False Witness #4, but we never really get the opportunity to dig deep enough to find out.

Silvia Califano’s artwork is better than serviceable in Judge Dredd: False Witness #4.  All the characters are clearly delineated, and there is no confusing who is who.  As it should be, Mega-City 1 comes across as its own character, a vast, labyrinthine monument to excess, deprivation and the heavy hand of the law.  I would’ve liked to have seen more of the bizarreness of the city and its people – there are mobs of citizens, but none of the more outlandish freaks make an appearance.

Califano handles the combat scenes very well – panel after panel of barely controlled chaos as Judge vs Droid ends explosively and with terminal violence.  The carnage is never to excess – Judge Dredd: False Witness #4 is something a younger reader can look at without there little heads being filled with blood and gore.

Judge Dredd: False Witness #4 feels a little hollow, a little bit bland.  It hits all the right notes, exposing the corruption and cynicism that is the beating heart of any Judge Dredd story, but it feels like we’re going through the motions in some respects.  There is a nice thread of redemption for Lincoln, which is appreciated, but otherwise leaves the reader hungering for more emotional engagement.

Judge Dredd: False Witness #4 ticks all the boxes you’d expect in a Judge Dredd comic. That said, it feels like something of a missed opportunity; a chance to really go for the throat of a decadent and corrupt America - the surface is scraped, but the really rotten core remains hidden from view.