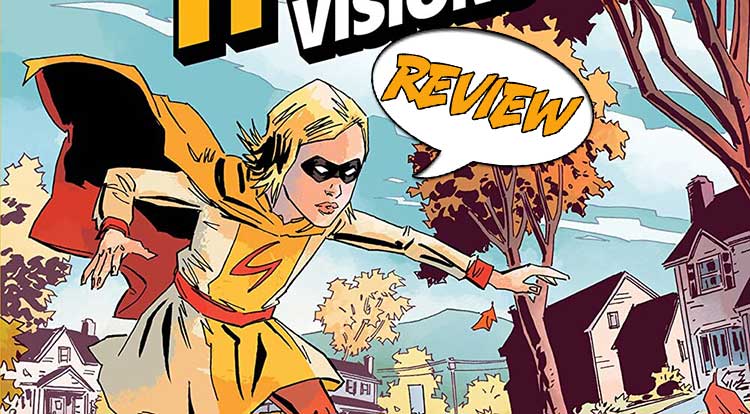 In Black Hammer: Visions #1, high school graduates Barbara and Eunice reminisce about their time together and discuss their strange classmate Gail.  Was Gail a superhero trapped in the body of an eighth grader?  Find out  in your next mighty Major Spoilers review!

Previously in Black Hammer: Visions: On their graduation day, old friends Barbara and Eunice go down memory lane and examine their time together with Gail, a precocious, foul mouthed fellow student who may or may not have been a super hero.  Strange Halloween parties, sneezing fits that stop runaway cars, and a science fair project that almost causes a riot all feature in this stunning solo issue!

Black Hammer: Visions #1 is a fantastic one shot within the Black Hammer universe, that takes a bittersweet look back at school through the eyes of two friends.  It is also an entertaining superhero story, wrapped in the semi-tragic tale of Gail Gibbons, fifty year old hellraiser trapped in a child’s body.

Barbara and Eunice have just graduated high school.  Their lives are ahead of them, but they choose that day to puzzle out the mystery that is Gail Gibbons.  Along the way, their friendship will be tested, then strengthened, while whoever Gail really is will only deepen.

Patton Oswalt has done a splendid job in crafting the lead characters.  While they may be as different from each other as night and day, the shared experience of schooling together has forged deep links, links strong enough they survive the stresses and strains of the conversation about Gail.  Black Hammer: Visions #1 runs on a dual track – the story of Gail Gibbons is the entertaining part, but how Eunice and Barbara navigate their changing friendship is the heartfelt part.  Gail is just the catalyst that moves that friendship onto a more adult track.

Black Hammer: Visions #1 is as amusing as it is poignant.  Most of that humor comes from Gail’s interactions with her situation.  Her inappropriate show and tell sessions in class, the ‘everyone dies’ exhibit, ‘yes, even you’ at the science fair, to a very, very weird Halloween party all elicited chuckles from me.  Gail is the wish-fantasy a lot of kids have about school – saying it how it should be, being your true self – that gets stifled in the unrelenting conformity of uniforms, classrooms and demanding teachers.

The theme of Black Hammer: Visions #1 is remembering – going back in time to those golden tinged memories of school, thinking about Gail and her impact on their lives.  It’s also the main theme of Gail’s final speech near the end – how memory plays a part in forming who we are, and that wiping it clean to protect Gail’s secret, would be the worst thing in the world.  Hold onto your memories, because they make you who you are, is a fine coda for this issue.

The artwork in Black Hammer: Visions #1 is second to none.  Dean Kotz and colorist Jason Wordie have done wonders with the art in this issue.  Wordie has created an autumnal feel with the artwork, triggering the sensation that the two friends are at the end of something in their lives (high school) which will lead to a springtime renewal.  It’s hard to um up Kotz’s work in a single word.  There’s a sketchiness to it that feels more impressionistic, yet the realism of it – depicting the glances, eyes going distant as the girls think back, to the fraught moment their friendship teeters on the brink of collapse – that really strikes at the heart.

Whether Gail Gibbons really is a superhero trapped in a child’s body is left up to the reader, until the final few pages.  That last image on the last panel becomes a heartfelt, positive one – Gail revealed in all her glory, while Eunice and Barbara are reunited, friends again on the most important day of their lives, to that point.  Black Hammer: Visions #1 is a startlingly good comic, but equally as important, it is a lovely issue revolving around friendship.

Black Hammer: Visions #1 hits all the right notes in examining what friendship means, and the central role school plays in our lives.

An entertaining one shot, Black Hammer: Visions #1 posits a mystery, but uses it to reveal something about the nature of friendship against the backdrop of school. Eunice and Barbara are as different from each other as they can be, but that doesn’t matter, as shared experiences have forged a friendship with meaning.