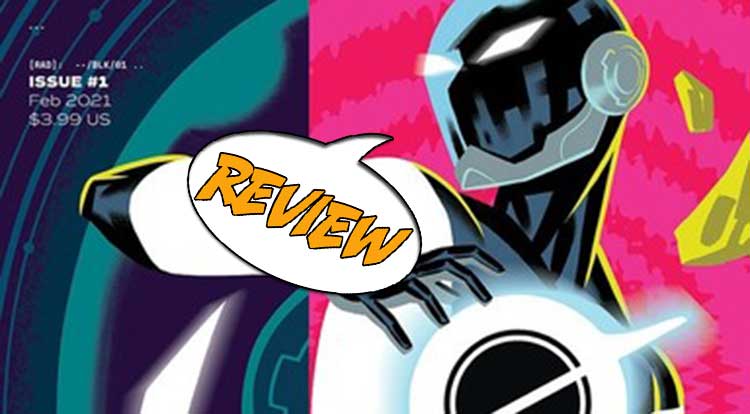 Nathan Burnett is deep in debt and must regroup. When he suddenly finds himself with superpowers, is he ready to step up and believe in himself? Find out in Radiant Black #1 from Image Comics!

Previously in Radiant Black: Nathan Burnett is a writer. This is not an easy way to make a living, and he finds himself falling behind financially despite working two jobs. Is he going to need to (shudder) move back in with his parents? Will he ever get back on his feet?

STARTING FROM THE BOTTOM

Radiant Black #1 opens in L.A. as Nathan Burnett is being turned down for a loan. He’s in his car; his phone shows his unfortunate negative balance. Arguing doesn’t help his case any, although it does inform us that he is a writer who is trying to sell his first novel. The call ends, and he is devastated. Then a guy opens the back door. Nathan also drives to earn some cash, although it plainly isn’t enough. I think, in this day and age, there are a lot of people out there who can really identify with Nathan.

A week later he is in Illinois moving back in with his parents as the snow starts to fall. They’re honestly happy to see him, although he feels like he’s a failure. He doesn’t have a chance to get in the door before his friend Marshall shows up. Nathan hadn’t told him he was coming back, but the parental grapevine is pretty effective. This is also an effortless way to segue into the next scene where Marshall takes him out drinking and finds out Nathan is $38,000 in debt. And he hasn’t told his parents. At any rate, they get drunk and Marshall tries to convince him that living here isn’t as bad as he thinks.

After they leave, they see a glowing thing in the sky like a small, black sphere bisected by a line. Marshall wonders if it’s some kind of mini black hole. Nathan touches it, and suddenly we have an origin story. The glowing things attaches itself to Nathan, and after a bit of special effects, he is wearing something that looks like a futuristic superhero suit. Marshall quickly snaps a picture so Nathan can see for himself. Marshall has also established himself as the friend with the smart mouth, and when a couple police approach them, he has the most delightful line, describing himself and Nathan as “First Amendment auditors.” Marshall doesn’t notice they’re on the train tracks, and a train is approaching fast. Nathan tackles him and cue the mysterious powers as the police and the train are suddenly floating in mid-air.

Marshall is all set to be the sidekick. He’s amazed and enthusiastic. He is also ready to help figure out how the suit works when Nathan cannot free himself of the helmet and starts panicking. And as for Nathan, well, he’s another story. He has screwed up his life so far, but now something incredible has just landed in his lap. And he’s having a small existential crisis about whether he is going to screw this up as well. Little does he know, this may be the least of his problems.

A NIGHT ON THE TOWN TURNS LIVELY

Radiant Black #1 opens on Nathan in his car. Actually, it opens up on a full-page panel of his debt balance, which slams things into perspective. But when the focus shifts to Nathan trying to talk his way into the loan, we can see that he is about at the end of his rope. He looks vulnerable, and we don’t know where this story will be taking us. It hits a chord.  We’re a good year into a pandemic, and there are a lot of people who are in a similar place. I like that Nathan isn’t just another young, optimistic kid when he acquires his powers. He’s an adult. Not only that, but he’s an adult who has made mistakes and who has wasted opportunities. It’s an interesting place to start as a superhero.

There’s a really cool thing that happens in the coloring. In the early scenes, the palette is muted. Granted, it’s wintertime, but it also gives things a down-to-earth, even an almost bland feel. When Nathan and Marshall go out drinking, the warm tones intensify a little, as though the bar is warm and a little livelier than the everyday world. But when they step outside into the snowy night to discover the mystical thing, the colors become intense with a strong contrast between warm and cool tones. And there’s a lot of glowing going on. It brings more life to everything.

Radiant Black #1 is a classic superhero origin story but updated and anchored in a world where things are not so easy. It has a good balance of humor and seriousness, and it reads like a story that has someplace to go. I’m looking forward to seeing more.

80%
80%
A Good Balance of Humor and Seriousness

Nathan Burnett has not done much with his life yet, but that’s all about to change.