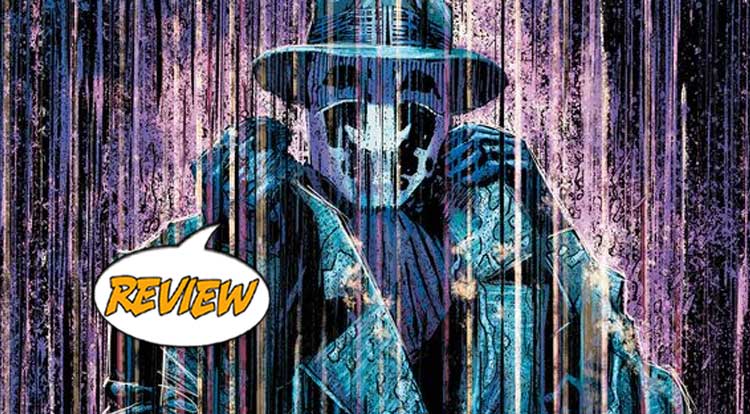 How did Rorschach get close enough to nearly assassinate a political candidate?  And did he have help?  Your Major Spoilers review of Rorschach #5 from DC Comics awaits!

Previously in Rorschach:  Rorschach tried to kill the leading contender to unseat President Redford, a governor by the name of Turley who has a lot to say.  Turley believes the Redford people were behind the hit, but the detective investigating the case isn’t so sure.  To prove Turley wrong, he has to figure out how Rorschach and Laura got so close to actually doing the job, and the answer to that might be deep in the Turley campaign itself, including the governor’s past with a masked man called the Comedian.

Our main character (who is still unnamed halfway through a story that is focused on him) meets with a contact about the possibility of meeting with Governor Turley, the man that Rorschach was targeting during the fatal assassination attempt back in issue #1.  He manages to get an audience with him, after passing through a lot of hoops and a particularly unpleasant security pat down, he is taken to see the governor… who is on the toilet.  Their interview is quick, curt and perfunctory, with Turly explaining how he met The Comedian not once, but twice during his military career, and revealing that the would-be President is something of a ghoul.  Moreover, he believes that the killers were working in the employ of President Redford, in the hopes of staying in office for an unprecedented fifth term.  As the issue ends, he’s walking through the darkened streets, with phantoms of Rorschach and The Kid following him and laughing raucously.

This issue is grim.  Even in a series that serves as a sequel to Watchmen, the wellspring of the grimdark ’90s, this comic book feels like a dark and hopeless dip into freezing cynical waters.  Last issue’s story was incredibly compelling to me, so it’s a big shocker to find this one so immediately off-putting, especially when the art is as good as it is.  Fornes grasps the real world setting even more strongly than Gibbons’ work in the original series, immersing us in a world of cigarette smoke and liquor and angry men who believe the unbelievable.  I’m impressed how even a back-and-forth moment in a skeevy bar has tension and drama under his pencils.  It’s doubly impressive when I consider just how flat the dialogue feels throughout the issue, and how little character anyone has.  Turley is a two-dimensional corrupt politician, paranoid and angry, and our main character still doesn’t even have a name, which is a problem for me.

I’ve gone from strongly disliking the first issue to dislike to admiration and back over the first four issues of this book, and I’m sad to say that Rorschach #5 swings the needle back to dislike, with a story that feels flat and artificial even with a lovely art job to hold it all together, earning a still better-than-average 3 out of 5 stars overall.  If you’re really into King’s whole vibe, it will likely work much better for you, but I’m once again uncertain whether I want to read the next issue of this series.

After last issue's strong showing, things slide back down into the disconnected and grimdark again, but there's some pretty good art to help it all go down.