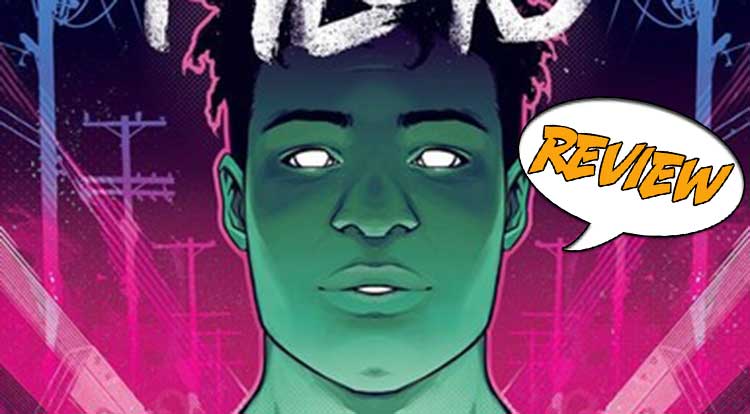 Ami longs to finish helping the house and return to her life, friends, and music. But can she? Find out in Home Sick Pilots #3 from Image Comics!

Previously in Home Sick Pilots: Punk band guitarist Ami has been drawn into the Old James House, but while she is missing, she is not dead. The house has manipulated her into going out in the world and retrieving its ghosts through items they’re associated with. She recovers a horseshoe for the house, but the woman who had had it kills herself. When Ami returns to the house, she sees traces of blood (from the deaths of the Nuclear Bastards, which she doesn’t know about). Meanwhile, Buzz and Rip escape from the house with their lives. But when they try to get back in, all the doors are locked. To make matters worse, Rip gets picked up by the police.

AMI’S STORY…BEFORE SHE LEARNS THE TRUTH

Home Sick Pilots #3 opens with Ami reminiscing about the band’s first performance and how terrible they were. When we focus in on her, she is in her ghostly form talking outside Buzz’s window and wondering why they haven’t come looking for her. What we know, of course, is that they have. She has found a bunch of ghosts by now, which should be helpful for the house, but she’s also worried about how it’s changing her, and especially that she might never be able to come back. But Buzz is asleep and doesn’t hear her.

It’s been a week since the Nuclear Bastards disappeared and the police come to the high school to question several students, starting with Buzz. He gets worried and looks for Rip, who has been skipping school. After a run-in with a group of street punks, he finds Rip deep in a haze of drugs. Rip thinks Ami is gone for good. Buzz has a feeling that she is still in the house. He warns Rip about the police and mentions that they think whatever happened, Ami did it, focusing on her because of whatever happened with her mom years ago.

Buzz returns to the Old James House. He has found a window that is broken so he can get in. He has also been taking notes as he explores, and he realizes that the rooms move around. There are also new things in the house that weren’t there before. In a counterpoint to his musing, we get bits of background on these items that Ami has retrieved – think in terms of cursed items.

But Buzz has also been doing some research about the house and learned the story of the man who built the house (when he had a fortune), and then had a turn in luck and lost just about everything. After he was gone, there were a series of tragedies in the house. Buzz talks as though he is talking to Ami, about how the house found something in her, about how maybe the house is afraid of losing her.

But Ami is not there. The house has sent her out on another mission. In retrospect, as she  narrates for us, she eventually realizes that that the house is doing this on purpose. In the present of the story, she has not yet learned this. As she deals with this latest ghost, which she eventually finds out does not belong to the house, the house turns its attention on Buzz!

The art of Home Sick Pilots #3 has good, clean lines and solid composition. I like the sequence when Ami talks to Buzz. She is in her white-haired ghostly form and holding, of all things, a table lamp. This was one of the ghosts she was sent out for. She is so earnest talking to him, and almost looks happy, although not as happy as she was when she could play her guitar. We get a sense of her worry about losing herself, but we also see that she feels she has a purpose, that she is helping. She is helping someone or something in the way she needed help that she did not get.

I also like when we see Buzz exploring the house. There are hints of red glow in the background, hints of the spirit of the house. These appear when he is not looking in their direction and it feels like a horror movie. As he talks about the history of the house, we see panels that show us what happened. It’s like we can see the house ghosts while Buzz has no idea that they are even there. The colors in this section are bluish-gray, which fits with a dark, haunted house, and really makes the red pop. The strong contrast builds in the feeling of dissonance that you get with a horror story.

BOTTOM LINE: A SINISTER SPIRIT WITH A MIND OF ITS OWN

Home Sick Pilots #3 takes the basic premise of the haunted house and elevates it to something truly sinister and disquieting.

The world of reality and the world of ghosts intersect with catastrophic consequences!