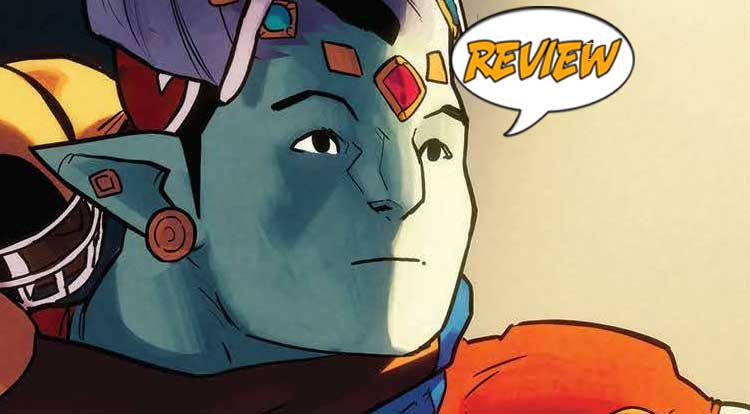 They’ve fought supervillains, monsters and literal demons, but are the Runaways up to the worst of the worst…  high school?  Your Major Spoilers review of Runaways #33 from Marvel Comics awaits!

Previously in Runaways:  The Runaways descend into one of the most terrifying Marvel Universe locations ever: HIGH SCHOOL!

It goes better for some than others.

A TIME OF UPHEAVAL

Thanks to a little A.I. hacking by Victor, the Runaways have returned to high school.  Well, at least the ones who are the right age: Victor, Molly, Gert and Gib (who used to be an immortal god.)  Gert really wants to make it all work, but finds that the day-to-day grind of being a teenager in school is a bit daunting, while Gib makes a name for himself as the new star of the football team.  With Karolina still feeling the effects of her injuries from previous issues and Chase being a feckless young man, it’s up to Nico to be the adult in the room, trying to deal with the chaos of sorta/kinda parenting and trying to balance her own life and ailing girlfriend.  When Wolverine and Pixie arrive from Krakoa to take Molly away to the mutant utopia, the whole team (including Doombot, who is acting as the team’s majordomo and feeling a bit like Alfred Pennyworth) mobilizes to defend her…

…until Wolverine reveals that Molly actually CALLED them to come get her.

AND A SUDDEN GUEST-STAR APPEARANCE!

This issue is a lot of fun from a character perspective, with Chase sneaking in and out and possibly having a romance, Gib finding that the worship of high school football is remarkably like his previous life as a god and Gert maybe finding a friend in school.  I especially like how quickly everyone leaps into action when it seems like Molly has been threatened, reminding us that while the Runaways may not be good at making it to class on time, they will murder you if you threaten one of their own.  I find Genolet’s art absolutely adorable, channeling some of the team’s original vibe (seeing as how they were specifically created to emulate the popular manga of the day) and making for really cute characters on every page.  The downside comes in the fact that this issue feels like one of those “nothing really happens” issues that pop up once in a while, even with the big reveal at the end, and I feel like a little too much of what is happening is left ambiguous for my tastes.

Even with those complaints, I find Runaways #33 to be an enjoyable issue full of cute people, clever dialogue and some really creative moments, coming together for an attractive 3.5 out of 5 stars overall.  With the problems surrounding Franklin Richards’ refusal to join the mutant nation, I fear that next issue is going to be a mess, but even if it is, I think it’s going to look really good.

The Runaways have been through a lot, and it's nice to see them dealing with the consequences, even if it doesn't feel like a lot occurs in this issue.