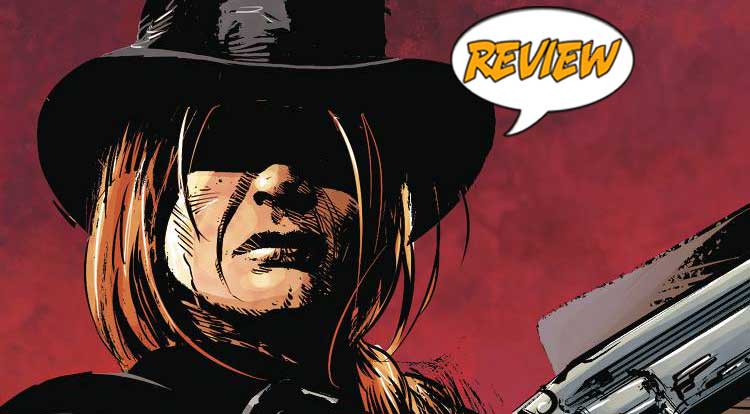 The legend of The Butcher is known throughout the town of Redemption.  Someone’s about to find out how true the stories are.  Your Major Spoilers review of Redemption #1 from AWA Studios – Upshot awaits!

Previously in Redemption:  The dusty desert town of Redemption survived the apocalypse but is hanging on by a thread.  A despot rules the town with an iron fist and controls its most precious resource: water.  When that strongman marks her mother for death, young Rose Obregon ventures into the perilous wasteland to seek the help of the legendary gunslinger Cat Tanner, only to discover that the so-called “Butcher” is long retired, living in solitude, far from what’s left of the world…  and preferring to keep it that way.

WHAT’S PAST IS FUTURE

We begin with public torture…  That’s not a phrase that I get to write all that often.  In the town of Redemption, a woman named Inez is being humiliated and whipped for the crime of aborting a fetus, with the sheriff taking great joy in publicly humiliating her and sentencing her to death.  He even snarls that her “pathetic little rebellion” ends here, throwing her in the jail to await her doom.  That night, Inez’ daughter Rose slips into the jail to bring her water (which is apparently in short supply) and to ask her for the true story behind the legends of The Butcher.  Inez explains (and by extension, tells the readers) what had happened, including the incident that took the sheriff’s eye, ending with the tale of how the legendary gun-slinger took down 25 men who had wronged her in one fight, earning her nom de guerre.  Rose realizes that her mama’s only chance lies with this legendary figure, fleeing into the desert on a dilapidated cycle, pursued by the sheriff’s goons.  Though the machine gives out, it gets here to where she needs to go…

Perhaps my favorite part of this issue is when  The Butcher/Cat Tanner reveals herself as a woman in her sixties (and the spitting image of ‘Dark Fate’-era Linda Hamilton) before ordering the horde of thugs off her property.  It’s a classic western trope, and a moment that really lands, especially once the guns come out.  The dialogue is crisp and the storytelling is damn near perfect, especially the sepia-tone coloring, really underlining her remote desert home.  Not all the issue manages to hit such heights, though, as the transition into the legend of The Butcher just sort of comes out of left field, and Rose’s flight into the desert required more than one read to figure out the blocking of the story.  That said, the story works really well and Deodato’s art is quite impressive.  In the past, I’ve complained about his “stunt-casting” of real actors for his character likenesses, but Cat’s face is so perfectly rendered that I can’t make that complaint again.  The coloring makes the visuals doubly-effective, with a washed-out daytime palette, a blue-and-gray nighttime scheme and clever use of monotone and lower contrast for the flashbacks.

In short, I had not idea what to expect from Redemption #1. but what I got was a clever melding of western and the post-apocalyptic likes of ‘Mad Max’, held together by strong dialogue, creative art and a truly spectacular coloring job, putting it all together for a well-deserved 4 out of 5 stars overall.  It’s clear from the very first that we’re looking at a creative team with a clear vision and the talent to bring it to life, and I’m absolutely in for the long haul after the success of this issue.

It's a genre-meshing story that has to do a lot of heavy-lifting and world-building, pulling it all together with strong art and excellent coloring. Well-done!