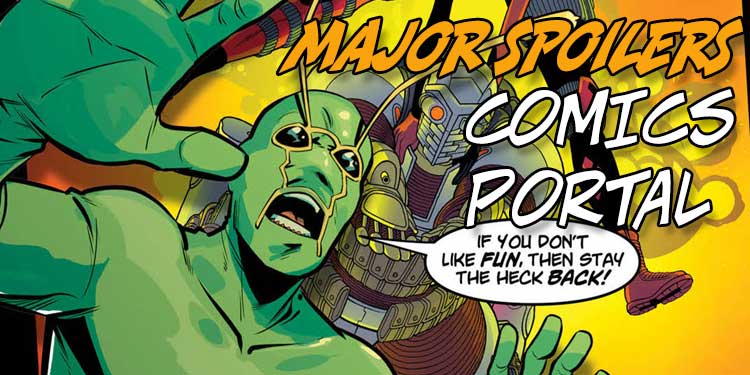 I’ve often wondered what happens to stories that are ordered but don’t see the light of day for some reason. Well, never fear! DC is about to bring some of these “untold tales” to fans through Let Them Live! on their DC UNIVERSE INFINITE online service! DC recently announced that the first original title through DC UNIVERSE INFINITE is coming, and it’s called Let Them Live!

Here are a few important paragraphs from their news release:

Let Them Live!, a new series featuring DC’s previously unpublished comic book stories, will now be made available for DC fans! Issues of Let Them Live! will debut on DC UNIVERSE INFINITE beginning on February 2—an added bonus for the subscription to DC’s ultimate fan destination—on a biweekly basis.

The first three issues of Let Them Live! have been announced:

Those framing sequences will feature none other than Ambush Bug, who is now working as a night janitor in DC’s offices. Ambush Bug will introduce each tale and provide “a meta-narrative for fans to react to.” These are written by Elliott Kalan of MST3K fame.

There is no sign of these appearing in print form… at least, not yet. I know some folks will be stunned to find out that some comics companies, to make sure they can meet their grinding monthly schedule, commission stories they might need to fill an empty slot or two.

The reality of the situation is, some creators fall behind on their schedules. What’s a company like DC to do when that happens? Well, if they’ve been burned enough times, they’ll make sure they have something to put into that empty slot when it happens.

However, some stories don’t get published because of scheduling issues, printer problems, and other circumstances. I know that sometimes these tales just don’t make it to the printed page.

Of course, there might be other concerns involved with this. Did the story work out? By that I mean—was the tale good enough to publish? Did this story take place during continuity that no longer exists? Did it just not live up to expectations for any reason?

Granted, I’m thinking negatively here. These stories might actually be excellent. Now that DC’s apparently moving into an “anything goes” kind of set up, these works just might, well, work.

WHAT IS DC UNIVERSE INFINITE?

A few years back, DC decided to break into the streaming phenomenon with what they called DC UNIVERSE. I came across it at San Diego Comic Con, and I signed up for it. It featured digital comics (although a few months behind the print versions) and lots of videos from past shows featuring DC heroes (I never did catch up on The New Adventures of Superman from the 1960s, though).

What forced changes to this service was the arrival of HBO MAX, the Warner Bros. streaming service that came not long after DC UNIVERSE got underway. It now has many of the features DC UNIVERSE used to provide. However, HBO MAX was much more video oriented, so what was to take place with the digital comics and related functions?

The company decided to launch DC UNIVERSE INFINITE, and here’s their official description of the service:

DC UNIVERSE INFINITE is the primary destination for fans to discover new comics every day, from popular recent releases to more tales from deep in the archive vaults, rescued from the wear and tear of time and digitized for new readers to enjoy, 85 years later. Subscribers also gain access to curated “Showcase” collections and friendly “Get To Know” entry points to help discover new characters. DC UNIVERSE INFINITE is available for download on web, Android, & iOS devices.

I have access to both HBO MAX and DC UNIVERSE INFINITE, so I’m a happy guy! I do know some folks who have had to choose between them, but the former will introduce movies like WW84 and such, so I fear for the latter. I hope it will do well.

Obviously, Let Them Live! is an attempt to provide new content available nowhere else and that will attract die-hard DC Comics fans.

These kinds of developments always worry me when it comes to the future of comics. What if so many people go digital that they stop buying paper comics, and that causes the end of local comics shops?

I do lose some sleep over this, believe it or not!

Some of my comics friends tell me not to worry, though. The experience of holding a paper comic in your hands and reading it remains very different from reading a comic on an iPad, for instance. Then, too, digital comics are hardly collectible, and no one has figured out how to make that happen… yet, anyway.

What I really hope is that this development might actually attract some new comics fans. Maybe the people who like untold tales might jump on board! There might not be that many of them, but at this point, we need every potential comics aficionado we can get!

What do you think? Do untold tales interest you at all? Is this a smart move on DC’s part given that comics fans are always looking for new material to read? Would you like to sample currently lesser-known creators or hold out for those we know better? Whatever your opinions, be sure to share your thoughts in the space below!