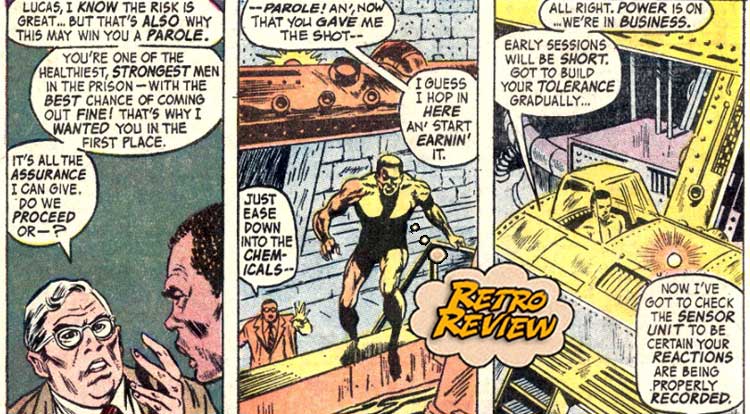 Previously in Hero For Hire: In the old days of comics, it was common to see creators attempt to emulate something that was popular elsewhere in pop culture.  ‘Lassie’ gave us Rex, The Wonder Dog, the films of Frankie and Annette gave us the Silver Surfer and the kung-fu craze of the ’70s is still being felt in the pages of books featuring Lady Shiva, Shang-Chi and Karate Kid.  When blaxploitation movies exploded onto the scene, Marvel editorial was determined not to leave hypothetical money on the metaphorical table, and Archie Goodwin, John Romita and Marvel E-I-C Roy Thomas put their heads together to create a new superhero. In Seagate Prison, known to some as Little Alcatraz, a young man named Lucas has to suffer not only racist guards straight out of ‘Cool Hand Luke’, but the petty criminals who are his only allies.  Gang leaders Comanche and Shades try to recruit Lucas, who is respected for his toughness and his tenacity, into their group, but his response is a fist in Shades’ face.  That violence brings him to the office of the Captain of the prison guard, who also wants Lucas to play on his team. The arrival of a new warden comes just in time to witness Lucas getting a beating, leading to Captain Rackham getting demoted for his laziness, a problem that he blames on the man he ordered beaten, because Lucas literally can’t catch a break.  He can, however, get involved in a special medical project that…  Well, honestly, it feels almost as racist as the beatings by the guards. Tuska and Graham together make for an okay art team, but it never quite reaches the level of Romita’s cover, one of the best-looking Marvel debuts of the era,, but it does get across that Luke Cage is a powerful, proud and physically imposing man.  (The next issue, which recaps most of this one, is a MUCH cooler looking comic, with Tuska and Graham  meshing better and our lead character looking much more handsome.)  Lucas explains to kindly Doctor Burstein that he was railroaded, set up by his oldest friend and forced to witness the death of the woman they both loved.  Burstein offers him a place in his experiment, and Lucas grudgingly accepts it…

…but his old tormentor Captain Rackham still holds a grudge (and the keys to the prison.) That third panel is really incredible, by the way.  Rackham’s interference causes the experiment to go out of control, transforming Lucas’ skin to steel-hardness and allowing him the power to smash out of the prison and swim for the mainland, seeking revenge.  (It’s hard not to wonder how much the revelation of the Tuskegee experiments around the same time influences Luke’s origins, vis a vis the use of questionably ethical experiments on people of color.) Since Inmate Lucas took a number of seemingly fatal bullets before falling into the ocean, he is believed to be dead, and has to create a new identity for himself. Of course, Luke isn’t the only one turning over a new costumed leaf, as the issue ends with the revelation that his frenemy Willis is now the deadly Diamondback, criminal overlord of Harlem!  It’s a setup rife with potential, albeit seen through the lens of a particular type of ’70s story, meaning that Hero For Hire #1 succeeds as a pulpy story filled with stereotypes that haven’t all aged well and an art team still getting to know how to best work together, earning a still-impressive 3.5 out of 5 stars overall.  The book absolutely would have benefitted from having Black creators other than inker Graham, but it’s an important step in a positive direction for comics, as Luke became the first Black superhero to headline his own book.

A pretty good comic that is best known for it's trailbreaking, but featuring one of the most amazing covers of the decade.