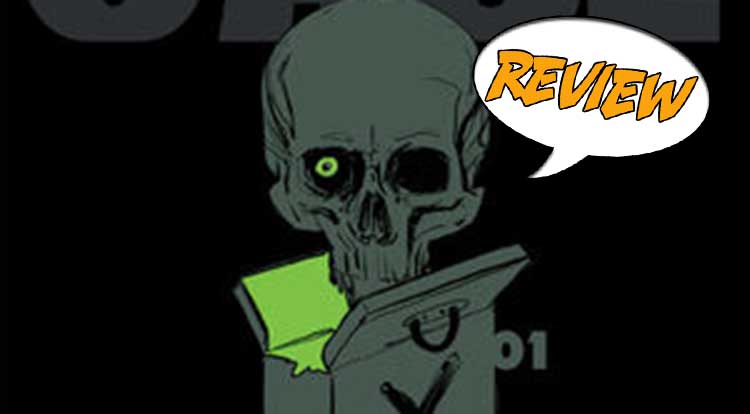 In Fear Case #1 from Dark Horse Comics, chaos and death has followed the Fear Case.  Now, a pair of Secret Service agents are zeroing in on it after a year of searching, but what kind of hell will they unleash when they find it? Find out  in your next mighty Major Spoilers review!

Previously in Fear Case:  Originally American’s original domestic intelligence agency, the Secret Service has had its remit whittled down over the decades.  However, it maintains a number of functions and legacy cases that it continues to investigate.  One of those is the Fear Case – a box containing documents, which legend states causes disaster for anyone who opens it or possesses it for too long.  Now, the mystery is on the verge of being sold…but at what cost?

WHAT’S IN THE BOX?

Secret Service agents Winters and Mitchum are three weeks away from completing a ritual in the agency that involves investigating a mysterious box that has appeared time and again down the bloody course of human history.  In its wake lie the dead and broken, those exposed to…something that promises death and destruction to those who don’t follow the following edict:  give the case to someone you hate…or the person you most love will take possession.

Writer Matt Kindt has struck gold with the concept – like the briefcase in Pulp Fiction, it isn’t so much about what is inside that is interesting, it is the carnage that follows in its wake that attracted the attention of the viewers.  And in reality, whatever is inside the Fear Case can never be as interesting as what we think is inside.  Far be it for me to advise someone as talented and prolific as Kindt, but he would be well advised to drag out revealing what is inside for as long as possible.

Fear Case #1 is really a masterclass in slow burn storytelling, plus a nice nod to director Quentin Tarantino.  The issue opens with our two colleagues not discussing the Fear Case, but instead the relative merits of coffee.  It recalls the dialog between Vincent Vega and Jules Winnfield in Pulp Fiction (there’s that reference again) about the merits of a whole host of otherwise mundane items, interspersing the hard core action.  In establishing character like this, Kindt not only slows the reveal of what Fear Case #1 is all about, but also drives up the suspense for when the reader will begin to be given a glimpse of the box’s black history.

We’ve seen this trope before – from the aforementioned Pulp Fiction, to the contents of the Ark of the Covenant in Raiders of the Lost Ark, all the way back to Pandora’s Box and the unleashing of ills (and hope) upon the world.  Updating it to the modern day, giving it a patina of the detective novel via the investigation of the agent’s and the possibility of there being a supernatural element to proceedings, only adds to the interest generated.

DRAWING IT ALL TOGETHER

I first came across artist Tyler Jenkins’ work in the Black Badge series.  Everything I said in my reviews for those issues applies here.  There’s a looseness to his style that seems effortless and impressionistic, but never loses control.  There are lovely scenes, such as Winters and Mitchum walking back to their car, bracketed by apartment buildings on either side.  The montage sequence, where the history of the box unfurls in a series of staccato images involving well known disasters and deaths, is a masterclass in conveying heavy story elements in such a way that the images convey all the meaning the reader needs.  Much of the imagery is stark, especially the aftermath of violence, but it is all compelling and draws the eye from panel to panel as the story picks up pace towards the inevitable cliffhanger.  Bravo!

Fear Case #1 contains familiar elements, handled in such a way that they don’t come across as tired.  Kindt builds the mystery nicely, as we get a sense of the box’s menace, and the mystery of what it actually contains.  The two leads have a great relationship based on mutual respect, and an amusingly dry sense of humor that only two long term buddies can have.

What’s in the box isn’t as nearly as important as the effect it has on those who come within its orbit. Fear Case #1 is the opening salvo of what looks like will be a strong series, with elements both natural and supernatural, as our True Detective styled secret service agents find themselves trapped within the coils of...the Fear Case.