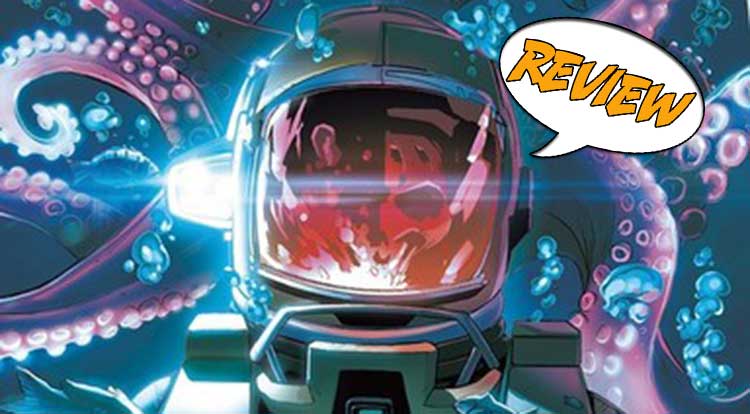 In Deep Beyond #1 a sinking submarine, an assassination attempt on the President’s son, a kidnapping, and then escape to the toxic ruins of America all culminate in a horrifying attack on our heroes.  Who lives and who gets eaten? Find out  in your next mighty Major Spoilers review!

Previously in Deep Beyond:  It’s 2085, and civilization has finally collapsed under the weight of environmental disaster and rampant capitalism.  Only a remnant survives, eking a life beneath the surface, trying to create a new world far from the toxic mess above ground.  There are others who work to reclaim the land, and then there are others who would punish humanity for its hubris, and send it plunging into a new dark age.

Deep Beyond #1 starts promisingly before collapsing under the weight of cliche.  It is certainly an entertaining read, and well illustrated and colored, but it is the victim of a lack of ambition, or, more pointedly, an unwillingness to break away from the tropes that inspired it.

It’s 2085, and instead of the Jetson-friendly flying cars and gleaming cities, the remnants of humanity huddle in undersea domes, far away from the toxic wastelands of the surface.  Civilization and technology certainly exist, but so do humanity’s oldest weaknesses – arrogance, hubris and greed.

Exposure to the air proves fatal to humanity, as their bodies sprout fungus as the toxins kill them.  Efforts are made to alleviate the worst of the symptoms, with expeditions sent out to try and find a cure for what ails the Earth.  But nothing goes to plan, of course, as disaster begets disaster for our main characters.

One of the issues I had with Deep Beyond #1 was in the plotting.  Introducing a cast of characters and setting up the world in one issue is always a thankless task, and I’m not attacking the writers, Mirka Andolfo and David Goy, for doing their best and coming up a little short.  But I did feel that there were several jarring changes of pace and scene, that with a bit more work, might’ve felt more seamless.  We open in a submarine, before moving to an assassination attempt, to an office argument, to a kidnap, and then an attack on two main characters by a giant tentacled monster.  On the one hand, there’s never a dull moment, but you do feel that narrative coherence has been abandoned in an effort to build up a head of steam.

That issue aside, the set up for Deep Beyond #1 is pretty neat, though it has all been seen before.  Humanity screws up the environment, retreats to bunkers to survive, while dastardly schemes bubble away, threatening our heroic heroes at the greatest moment of peril.  There’s nothing wrong with using earlier themes and ideas, but it seems quite a lot of them have been jammed into the one issue.

The saving grace is the artwork, by Andrea Broccardo.  The gunfights and knifings that occur at the party early in Deep Beyond #1 demonstrates Broccardo’s ability to provide a sense of momentum the writing sometimes lacks.  Clever use of angles at key moments, such as on the submarine or on the surface, give the world a sense of ‘bigness’ that might otherwise be lacking in the claustrophobic confines we see featured.  Ably colored by Barbara Nosenzo, Broccardo’s artwork elevates this issue.

BOTTOM LINE:  BEEN THERE, DONE THAT

Reading Deep Beyond #1 made me wonder what exactly it’s trying to say.  If it is a series merely designed to entertain, then it certainly does that, with a familiar, if disturbing set up, peopled with recognizable characters, facing recognizable threats.  If, however, there is an effort to say something about humanity abusing and destroying the only home it has, and that we should be doing something quick smart to ameliorate our impact on our planet, then I’m at a loss to find out what that is.

Familiar tropes and characters set in familiar world mark Deep Beyond #1 as the opening issue that feels very, very familiar.  Some lovely artwork and excellent action set pieces aren’t enough to elevate this opening issue above the average.