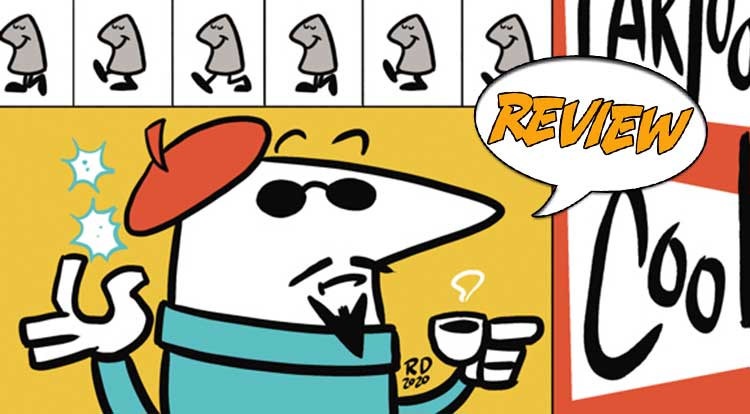 Animation – is it an art or a business? A tool for education or propaganda? Step into the wild and wooly era of the mid twentieth century with The Comic Book History of Animation #3 from IDW Publishing!

THE COMIC BOOK HISTORY OF ANIMATION #3

Previously in The Comic Book History of Animation: Sound came to motion pictures including animation. Walt Disney was right there, with Steamboat Willie launching the phenomenon of Mickey Mouse. Disney also set up a recording studio in Hollywood, while the other studios were still on the East Coast. Betty Boop had her run with popularity – and her run in with the Production Code Administration for being a bit too bawdy. Popeye and Looney Tunes also had their starts. But animation was still looking for the next big thing. First came color. Then came something that would change the future of the industry – the first feature-length animated film, Snow White.

Hold onto your hats! The Comic Book History of Animation #3 starts out running and doesn’t slow down. There is so much interesting stuff here. The book opens with a focus on Disney, particularly the style and aesthetic with their clean lines, pretty characters, and clear good and evil. Then the story takes a sharp turn to South America. Politics resulted in Disney having to settle with his striking animators, but it also led to the opportunity to make films to promote U.S. tourism in South America.

The Fleischer Brothers had their own issues. Their labor dispute led to their moving to Jim Crow Florida. A job animating Superman shorts with their rotoscoping process ran them out of money. They were bought out by Paramount and the studio moved back to New York.

Then World War II happened. There was money to be had doing training films for the U.S. military. Disney got heavily into this, and as a “strategic defense industry,” employees could be exempted from the draft. (But not all were – Disney did not make union employees exempt.) The War also begat a variety of war-themed animations, often racist. Speaking of racism, Disney’s first post-war feature was the infamous Song of the South. It was widely panned, the Black actor who played Remus (James Baskett) was barred from attending the premiere, and it was picketed by Black groups. Yet Disney convinced himself that this was all due to the Communists. And then there’s a sharp turn into McCarthyism.

As efforts began to drive all leftists out of Hollywood, another studio, UPA, unapologetically created pro-worker and anti-racism films along with creative comedy shorts, pioneering a style with more abstract backgrounds. These ideas were adopted by the more free-wheeling Looney Tunes. Warner Brothers, who owned them, may not have liked this much, but they still left the animation division to their own devices. The Road Runner cartoons are a perfect example of the merging of characters with a stylistically distinct background.

A BLOSSOMING OF STYLE

The art of The Comic Book History of Animation #3 supports the history with great panache. The 1940’s were years of brilliant color and distinctive styles in the animation world, and the art captures those iconic moments like a collection of snapshots. I like the way the opening panel, based on Bambi, sets the scene and gets our heads in the precise and pristine Disney style. That way, when we are hit from all sides by the other stylistic takes that were developing, the contrast is immediately apparent.

I like the way the art tackles post-War year. It doesn’t wallow in the racist years of animation but acknowledges them and puts them in perspective. For anyone who likes to claim that comics and cartoons shouldn’t be political, this is a reminder that politics are part of what makes art, and they can be represented in art in many different ways, some more palatable than others.

BOTTOM LINE: SO MUCH FASCINATING MATERIAL

Despite the huge swath of information within, The Comic Book History of Animation is a gripping read that feels like it accelerates to the end. These were challenging but formative years, and it’s worth learning about them.

The Comic Book History of Animation #3

From the Forties to the Fifties, animation constantly evolves with the times.