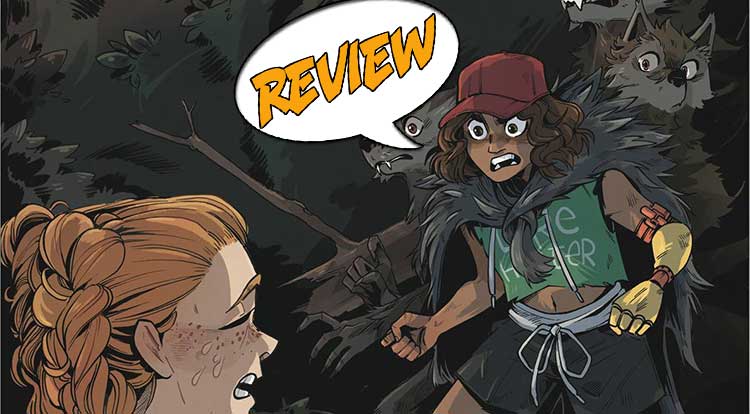 Goosebumps: Secrets of the Swamp #5 Review

With nothing but a wolf pelt and her skills at Lore Hunter, can Blake outwit the werewolf hunters long enough for Cara and her friends to get to safety? Find out in Goosebumps: Secrets of the Swamp #5 from IDW Publishing!

GOOSEBUMPS: SECRETS OF THE SWAMP #5

Previously in Goosebumps: Secrets of the Swamp: Blake has discovered that Cara is a werewolf and has found their secret gathering place in the swamp. Several young people are werewolves, and they just want to have a safe place to hang out and be themselves. But Lily’s family are hunting them. Before the pack can send Blake home, the hunters arrive. Cara wants to help her people, but Blake stops her long enough to come up with a strategy. Blake covers herself with a wolf pelt and runs out to distract the hunters because she won’t be affected by their special werewolf weapons, and Cara frees the werewolves. Blakes keeps up her distraction right up until she runs into Lily!

FACE TO FACE WITH THE ENEMY?

Blake and Lily have just run into each other at the start of Goosebumps: Secrets of the Swamp #5. Blake accuses Lily of leaving her in the swamp; Lily insists she came back. She apologizes, but that isn’t enough for Blake. She wants Lily to understand that her family is hurting people. Lily insists they are monsters, but Cara steps out and admits she’s a werewolf. Cara is Lily’s best friend. Lily is suddenly caught between trusting her friends, who seem to be telling the truth, and trusting her family. In a split second she makes her decision and leads the hunters away.

Blake and Cara make their way back to the werewolves, and Cara decides they should go to her dad’s old hunting ground, a place where they should be safe. Again, using her Lore Hunter skills, Blake sets up a distraction and catches some of the hunters in a net trap. Cara and her family are safe for now, and they let Blake keep the wolf pelt she used.

And Blake goes back to a summer vacation of playing video games up in the attic room in her aunt’s cabin. She chats with friends online, and it turns out she has stopped trying to overtake Lily in Lore Hunter. In a few more days she’ll be home. Or will she?

ONE FINAL ROUND OF TRICKS AND TRAPS

The artwork of Goosebumps: Secrets of the Swamp #5 is charming. There is a lot of hair and fur in this issue, and I like Blake in her wolf pelt. It’s draped over her with the open jaw over her head, and this was a wolf who was almost as big as she is. It is quite consistently drawn, considering all the things Blake is doing. Cara has a huge amount of wavy hair, and now we know why, as it’s a nod to being a werewolf.

The actual logistics of the fight between the werewolves and the hunters is a bit hard to follow. Plainly there isn’t any straight out killing. The story focuses on the girls, but we frequently see skirmishes in the background of the panels. It seems like there are an awful lot of people in Lily’s family. It’s also a little uncertain how many have been led away and how many still surround the Burrow. But frankly that isn’t the point of this story, because the point is more about Blake and the decisions she is making about who she chooses to help.

Goosebumps: Secrets of the Swamp #5 is a nice conclusion to a not-so-typical werewolf story that is written for younger readers. It’s thoughtful and is just a little bit scary. Readers can identify with the characters and I have to admit, I really like the sympathetic werewolves.

Goosebumps: Secrets of the Swamp #5

Blake has decided the werewolves are friendly – but what will Lily decide?