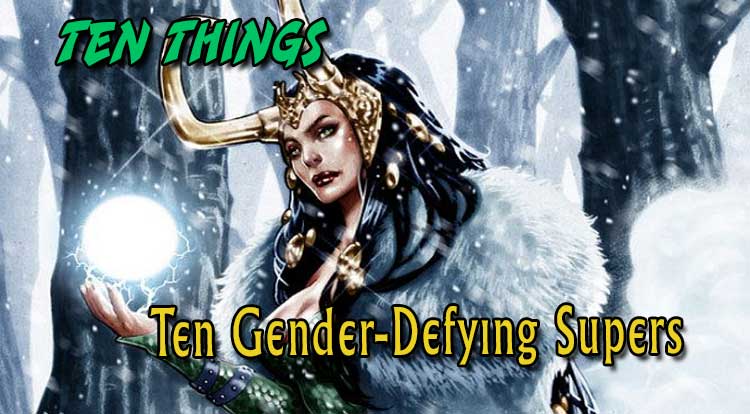 They say men are from Mars and women are from Venus, but what if you’re from Krypton? Welcome to Ten Things: Ten Gender-Defying Supers!

Whooshman-Bicarbonate Films, in conjunction with An Amateur Comics Historian and the complex nature and social structure of gender, Presents: One of the first recruits to SHIELD’s Super-Agent program, Denise Baranger was a skilled combatant and low-level telepath in her normal form. Befitting her name, Denise used her feminine wiles to her advantage, but when necessary could transform into a monstrous masculine creature known as The Animus, who was not only superhumanly strong but able to fire bursts of psionic energy. It’s all very Jungian. The Vamp turned out to be a double agent and was drummed out of SHIELD and later became one of the victims of Scourge, shot down with a high-powered firearm. Ann Stevens is a nurse who ended up caring for an elderly man named William Berman, who once encountered a wizard who gave him the ability to transform into a powerful being called Mighty Man. On his death-bed, Billy confused Ann with his grandson and passed on his mystical powers to her. Now able to transform into a super-powered male form, Ann is a powerful ally (and sometime romantic partner) of the Savage Dragon. When Red Kryptonite transformed Krypto the Super-Dog into the spitting image of TV’s Lassie (it was 1962, after all), he was overjoyed with his new grace and beauty. Krypto was less thrilled to find that new form was not only female, but pregnant with a litter of puppies, leading Superboy to dote over the new mother, even declaring a mission too dangerous for her. (I was 1962, after all.) The transformation faded, as did the super-puppies, and the whole story reminds us that classic comics were built on a foundation of ripping off what was popular in TV and movies. The most physically powerful member of the team called The 5 Swell Guys, Roger’s female body is a new development, after an unexplained incident in Suffragette City. When we first meet her, Roger has been in her female form for several years, with the general public believing that the team simply replaced their strongman with a strong-woman. While it’s not entirely clear whether the transformation was voluntary, Roger seems to be fine in her new body, continuing to adventure with her team. During a mission to battle the cosmic menace Pulsar Stargrave, color-changing superhero Ulu Vakk was accidentally exposed to Grandin Gender-Reversal Disease by his associate, Infectious Lass. Temporarily turned into a woman, she and the other member of the Legion of Substitute Heroes were successful in their mission, with Ulu later returning to male form once the infection had run its course. The first cross-dressing hero in comics, as far as I can discern, Richard Stanton was motivated to become a mystery-woman by the kidnapping of their daughter. Using their stage makeup skills, Madame Fatal set out to punch crime as a seemingly harmless elderly woman, with Richard’s surprising combat skills giving them the edge. A minor member of the Quality Comics stable of Golden Age heroes, Madame Fatal is a canonical part of the post-Flashpoint DC Universe, appearing as recently as 2011, with Richard living full-time as Madame Fatal to flush out evil. Though the term probably wouldn’t have been used in 1940, Richard might be the first genderfluid character in comics. A member of the Sovereign Seven, a team of inter-dimensional alien folk briefly headquartered in the DC Universe, Indigo is truly a mystery. Their powers allow them to be absolutely undetectable by human or machine and their stealth skills are as formidable as their combat abilities. Indigo’s birth name is unknown to even their teammates, and though people sometimes use male pronouns to describe them, Indigo never identified themselves as male or female.

Since they and the S7 are creator-owned properties that have been dormant since 1998, it’s not likely that any answers are forthcoming, either. When King Arthur and his Round Table were reborn in the year 3000, Sir Tristan (y’know, the one whose name has become synonymous with tragic medieval romance?) was reborn as Amber March, a young soldier who was about to get married. Force to deal with her new self, Sir Tristan questions betraying her king in return for Morgan Le Fey performing a magical spell to return her to a male state. In the end, Tristan stays the course and is reunited with Isolde who simply could not care less about Tristan’s gender. Depending on how one defines it, Sir Tristan’s 1982 debut may make her the earliest trans woman in comic book history.

Known to American audiences as Zoltar, Berg Katze is the field commander of Galactor, a group of terrorists led by a strange alien energy being. Berg Katze is neither male nor female, thanks to experimentation while they were in the womb, and is able to take on both masculine and feminine forms in their battle of the planets. In the U.S., their lack of gender was hand-waved away as the appearance of Zoltar’s sister on several occasions, but Katze (also spelled Katse) is non-binary. A universal archetype of the concept of desire itself, this member of the Endless has no gender and is not human, having come into existence (with their twin Despair) as soon as anything living in the universe was able to want. Since they are the embodiment of Desire, they are ever-changing, untrustworthy and utterly selfish, and it’s their machinations that led brother Dream to his eventual doom. Desire casts two shadows, one black and sharp, the other translucent and wavering, and they will always remind you of that ex you never got over, whomever they may be.

Thanks to Faithful Spoilerites Camden AND J. Michael T for this week’s topic, Ten Gender-Defying Supers.  Feel free to follow along @MightyKingCobra for more Ten Things madness on Twitter or check out the full Twitter archive here!  As with any set of like items, these aren’t meant to be hard and fast or absolutely complete, especially when we’re dealing with something this complex.  Either way, the comments section is below for just such an emergency, but, as always: Please, no wagering!