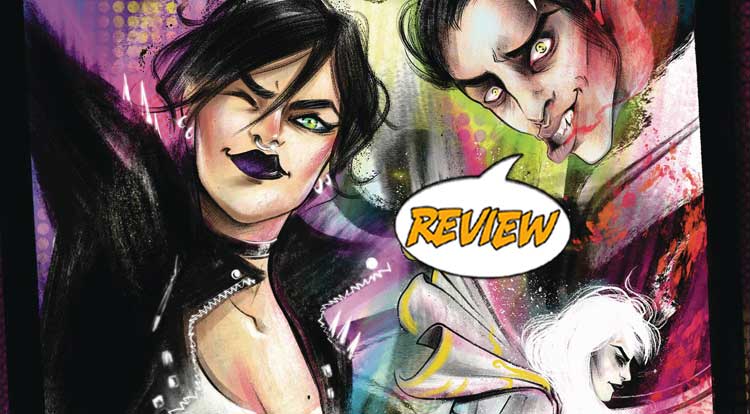 By Matthew Peterson on February 1, 2021 0 Comments

Anybody can fight a vampire, but you have to be REALLY good, if they call you Stake.  Your Major Spoilers review of Stake #1 from Scout Comics awaits! Previously in Stake:  Three years ago, Vampires announced their presence to the world in grand fashion; in one instant,  Angel lost her two best friends and her existence changed forever.  Now, as a member of the Vampire Bounty Hunter Union, and with the help of her ancient vampiric mentor Jessamy, she’s out to track down the bloodthirsty monsters who destroyed her life.

We open with a brutal on-panel murder, as the main character announces “Yeah, that’s me.”  Immediately, we’re thrown into a series of news broadcasts, all stunned at the reality that vampires exist and that they’re publicly stalking humans.  Cut to the video feed of Angel Stinson, aka Stake, who delivers the important exposition directly to her viewing audience (and also to us, the readers), explaining the whole situation and the presence of Ashwyn, a big bad vampire who seems to be behind it all.  Her narrative is nicely handled, and she documents it as she fakes a crime scene, gets picked up by an ambulance and suddenly attacks the attendants, at least one of whom she expects to be a vampire.  It’s a neat conceit, made even moreso by the arrival of her partner Jessamy, who busts up the nest of vamps and brings it all to a close, ending the issue with the end of Stake’s stream.

I don’t like sounding like an old man, but I’m not entirely sold on the idea of a vampire hunter who broadcasts her activities on social media, from both a practical perspective and on the level of “things that might not age well.”  Much like the Teen Titans of the ’60s and/or the ’90s, this issue could easily become dated in short order.  That doesn’t undercut the effectiveness of this art, as Fantini delivers high-contrast images that remind me somehow of the works of Nagel, with a slightly more subtle line.  It’s really impressive and highly expressive, and the action sequence of Jessamy’s arrival (in full corset, with swords extended, no less) are fun.  But even moments like Stake’s realization that her graphic shirt is printing backwards in the video are beautifully rendered.  The coloring here is also impressive, with deep reds for all the blood, and limited use of spot color for equally vivid blues and greens here and there.  The overall effect is just plain gorgeous.

There are a few moments that remind me that this issue is the work of less-experienced creators, with some transitional/storytelling moments that need work, and several points where the dialogue feels just a little too self-conscious, but all in all, Stake #1 is a good comic book and a successful first issue, earning 3.5 out of 5 stars overall.  Even if I’m worried about parts of the story being a little too on-the-nose, it’s a great example of how to leverage innovative art and coloring to really make your comic stand out.

I'm not entirely sold on the TikTok/YouTube premise, but it's a solid take on a familiar genre, with really impressive art and innovative coloring.