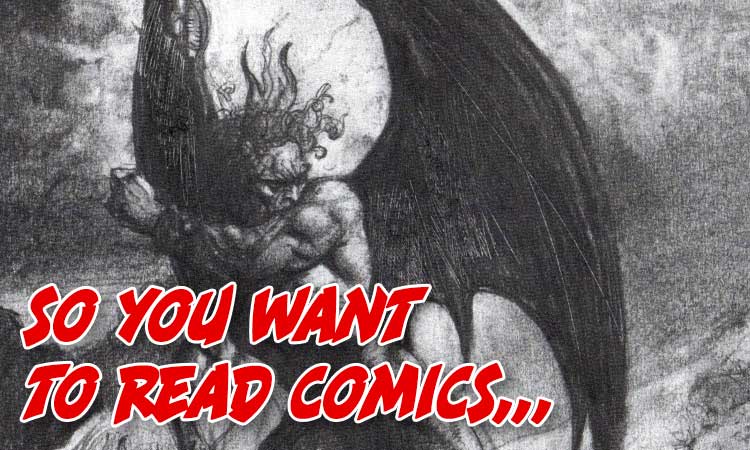 So You Want To Read Comics: Poetry Edition

By Jonathan Cadotte on February 1, 2021 0 Comments

Get your quatrains, couplets, and stanzas ready, it’s time for “So You Want To Read Comics”, our weekly feature where we focus on one topic, then offer some comic book recommendations for new readers, based on that topic.  This week we’re going all in on the world of poetry.

Poetry as an art form is believed to predate written text. It was sung and spoken, used to pass on culturally important stories and histories.  This then transformed into the basis for many early forms of theater, it was theorized about by Greek philosophers, it became the go to art form for many a high school student who just had a lot of things to say. Essentially poetry is an integral part of humanity and is a constant in one form or another.  There’s not a medium that hasn’t been touched by or has utilized poetry in one way or another, and you might have already guessed it, this goes for comics as well.

Here’s a few suggestions perfect for poetry lovers looking to get into comic books.

Originally published in 1667,  John Milton’s epic poem is perhaps one of the most influential pieces of creative writing of all time.  Depicting the fall of Satan from Heaven and the temptation of Adam and Eve over 10,000 lines of verse, Paradise Lost has introduced elements and details of events that have been co-opted by Abrahamic faiths, and created the mold for which many other pieces of fiction would use when depicting these scenes. It’s only fitting of course that someone would come along and do a comic book adaptation. Enter Pablo Auladell who set the poem on top of a unique and striking minimalistic art style that is both unnerving and captivating.  It managed to capture both the grandness of the story but also the details of the characters contained within in ways that the original text had glossed over giving the whole thing a brand new feel.  While it doesn’t contain all of the original poem, it has enough to carry the book through the main events.

Above The Dreamless Dead: World War I in Poetry and Comics

It should go without saying that World War I was one of the most brutal series of violent acts humans have ever inflicted on each other.  Yet, through all this horror a bit of beauty emerged.  Known as Trench Poets, soldiers on the front lines began to write poetry and send it home.  These were often harsh depictions about the cost of war and deep dives into the feelings of those fighting.  This collection takes those poems and contextualizes them in comic formats, often bringing a new interpretation to the poem, or bringing a more visceral depiction of the words, or often times, both.  It at times can be a hard read, yet it accomplishes what is one of poetry’s main goals, which is to add beauty to the human experience, which can be very ugly at times.

So what did you think of these recommendations?  Do you have some suggestions of your own? Let us know in the comments section below.