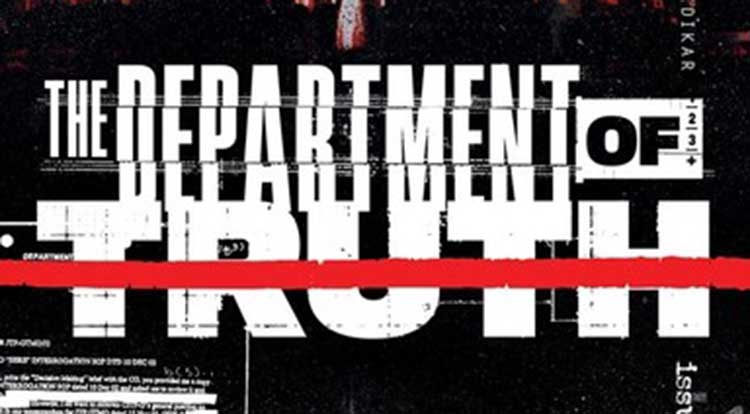 The Department of Truth #5 Review

In The Department of Truth, FBI analyst Cole Turner is having a really, really bad day.  It’s not just that he’s killed two journalists and is struggling to cope.  It’s that he’s had a visit from the Black Hat’s majordomo, who wants to convince him that black is white and up is down.  Will Cole embrace the crazy?   Find out  in your next mighty Major Spoilers reviews! THE DEPARTMENT OF TRUTH #5

Previously in The Department of Truth: Cole Turner is an FBI analyst who was sent to monitor a bunch of crazies at a Flat Earth Convention, then found himself flying with them to the South Pole, where he saw definitive proof that yes, the Earth was indeed flat.  Saved by Lee Harvey Oswald, head of the Department of Truth, Cole joins and begins the work of saving the world from drowning in lies…

EVERYTHING YOU THOUGHT WAS WRONG, IS VERY DEFINITELY RIGHT

If I said to you that the moon was made of green cheese, you’d have a laugh at my expense and tell me to give up drinking hard liquor at ten in the morning.  But if I convinced not only you, but a significant chunk of the population that not only was the moon made of green cheese, but that God was in fact a rather large rodent, would that be a lie?  After all, if tens of thousands, nay, hundreds of thousands of people believed it, were filling message boards praising the Rat God and his floating ball of cheese, and indeed, had marched on a significant building in the hopes of toppling the cheese deniers, who am I to argue with what is the truth, and what is a lie?

This is the central dilemma Turner faces in The Department of Truth, and indeed, it’s been the central issue of this series all along.  Reality is a fragile thing, and if enough people believe something, then reality will wrap itself around that belief and give it form and substance.  This issue goes further, with the Black Hats trying to convince Turner that the reality he has embraced is the wrong reality, that the work he is doing under Lee Harvey Oswald is in support of a reality that is an artificial construct designed to maintain American supremacy in a world currently in flux.

It’s a seductive idea, really.  Everything you thought you knew, every detail, every line in the history books, is dead wrong.  And in discovering that the world as you know it is wrong, all the other things that are wrong in your life – your relationships, that dead end job you hate, heck, even the football team you follow – all suddenly start to make sense.  If what the talking heads have been telling you all this time is wrong, then like reality, you can remake your entire life.

WE’VE GOT THE POWER

Writer James Tynion IV is at the height of his powers in this issue, after a slightly rocky start as Turner’s partner, Ruby, breaches Denver International Airport (itself the subject, in real life, of a number of oddly delightful conspiracy theories).  After that intro, we get into the guts of the story, where Turner is confronted by the softly spoken, compelling figure of Martin Barker (carnival barker, geddit?) leader of the Black Hats, the organization devoted to giving life to the conspiratorial nonsense that the world, in particular America, is awash in right now.  For all his humble origins, Turner is someone the Black Hats have been watching for many years, and it seems, are intent on turning him to their side.  While Turner is adamant he isn’t for turning, he is prepared to listen to Barker.  What is revealed in this chat will rock Turner to his foundations, and ensure the next few issues of the series are very interesting indeed.

The conversation between Barker and Turner is a delicate dance, handled deftly by Tynion IV.  Barker is all self-effacement, just a fellow who is laying out the facts for Turner to do with as he wishes.  Turner is ambivalently defiant, angry at his situation, and at Barker, but still willing to listen to him lay out his excuses.  And reading them, I found them to be compelling.  I mean, the Black Hats haven’t killed anyone, so far, have they?  And the White Hats are led by the man who reputedly killed JFK, so…he can’t be good, yeah?  And while America preaches democracy and the rule of law abroad, really, what do we have at home at the moment – anything but?

That’s the nature of lies.  Wrap them in some truth, and it begins to get hard to determine which is which.

The Department of Truth will take what you believe, upturn it, give it a good shake, then set it down and send it on its way.  It speaks to the issue confronting America at the moment – what happens when there are two sides debating an issue, and one side is content to believe all sorts of nonsense.  You can have your own beliefs, but you can’t have your own facts.

The Department of Truth #5

Strong writing and fantastic artwork mark The Depratment of Truth as another issue in a really strong, really compelling series that speaks to the moment America is trapped within.