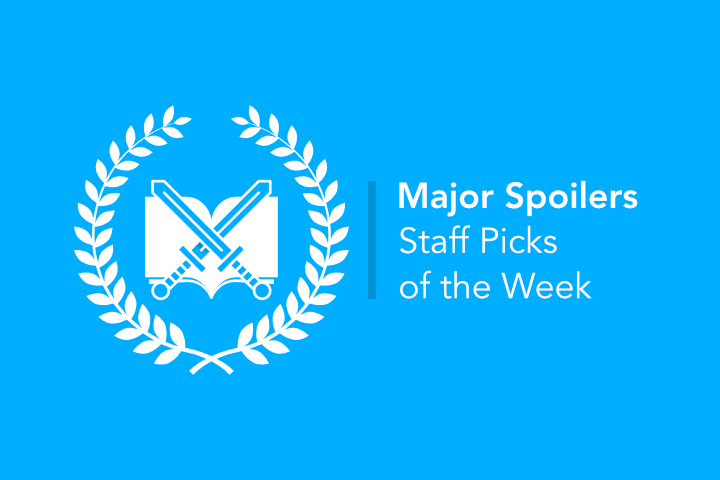 AMAZING SPIDER-MAN #58
Writer: Nick Spencer
Artist: Mark Bagley
Publisher: Marvel Comics
Cover Price: $3.99
SOLICITATION:
• One era of Nick Spencer’s run comes to a shocking end this issue…
• But the seeds that he’s planted along the way for the next start to bloom.
• Don’t miss this pivotal issue!

STEPHEN: Look, Batman may be one of those books that should always be on your monthly pull list, and that can only be paired with The Amazing Spider-Man. Nick Spencer’s big arc comes to a conclusion, and I want to see where he’s talking ol’ web-head next! LOOT #1 (OF 6)
Writer: Don Handfield and Richard Rayner
Artist: K. Lynn Smith
Publisher: Scout Comics
Cover Price: $1.99
SOLICITATION: Scoot! Imprint! Orphaned at birth, serial kleptomaniac Emily ‘Doe’ was lucky to be adopted by Viola Jackson, the cop who kept arresting her. Now grown-up (sort of), Emily D. Jackson works for her newly retired mom in loss prevention at a big box superstore by day and turns her passion for theft into part-time treasure hunting on the side. From the writers of History Channel’s Knightfall Don Handfield and Richard Rayner.

CHRISTOPHER: I’ve been looking at books I can share with my young daughter, and I think this is going to be one of those titles. MONSTRESS #31
Writer: Marjorie M. Liu
Artist: Sana Takeda
Publisher: Image Comics
Cover Price: $3.99
SOLICITATION: The start of a new arc! Maika always knew that her decision to involve herself in the battle of Ravenna would have repercussions, and now she begins to pay the price. War isn’t the only thing she has to fear-the political intrigue of the Dusk and Dawn Courts might be far more dangerous.

CHRISTOPHER: I love this Asia-inspired fantasy story. The art is captivating, and the story is complex without being overwhelming. Looking forward to what the next story arc is going to focus on. SHANG-CHI #5
Writer: Gene Luen Yang
Artist: Dike Ruan
Publisher: Marvel Comics
Cover Price: $3.99
SOLICITATION: The grand finale! SISTER HAMMER launches her final attack on the Western world with her army of vampires! Will SHANG-CHI and his family be able to stop her? And will Shang-Chi finally accept the destiny laid out by his father?

INGRID: If you’ve been following along, this is where the story wraps up. This is a grand and thrilling story where the battle against an army of vampires is juxtaposed with the lives and histories of the characters and the realizations of what family really means. SOMETHING IS KILLING THE CHILDREN #14
Writer: James Tynion IV
Artist: Werther Dell’Edera
Publisher: BOOM! Studios
Cover Price: $3.99
SOLICITATION: To save the town, Erica must take on the brood of monsters on her own. And Tommy is faced with a decision that means life or death.

INGRID: This book is so good – a horror story that keeps getting deeper and more complicated with just enough connection to the real world to make it seem more chilling. It’s coming down to Erica fighting not just the monsters, but also the people from the organization she used to be part of! UNKINDNESS OF RAVENS #5 (OF 4)
Writer: Dan Panosian
Artist: Marianna Ignazzi
Publisher: BOOM! Studios
Cover Price: $3.99
SOLICITATION: After discovering the truth about Waverly, our Ravens find themselves in over their heads, but Wilma is just beginning to understand the scope of her power and must now decide how she wants to use it…

STEPHEN: The final issue of the series is here, and it has been quite the ride. I do enjoy this take on magic girls in school with cliques that get everyone in trouble. Throw in a mystery, and I’m ready to see how Panosian and Ignazzi wrap this series up!

ROBOT OVERLORD: Customer service is like taking a bath you have to keep doing it.