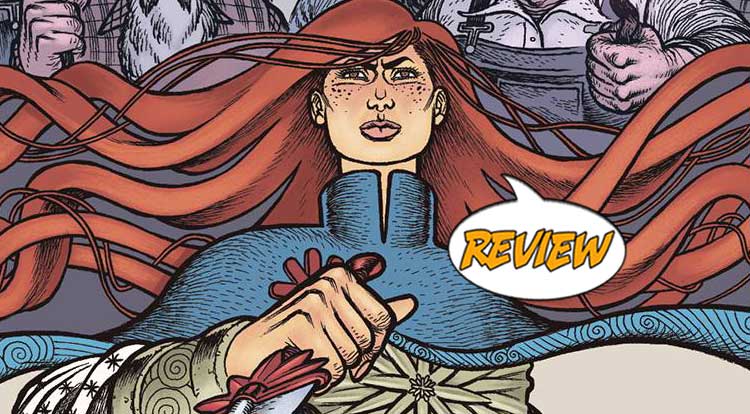 Previously in Crimson Flower:  After losing her family in a violent home invasion, a woman uses folk tales to cope.  In a blood-soaked journey toward revenge, she tracks down the man responsible for her family’s deaths, only to discover a startling government plot-to weaponize folk tales and use them to raise children into super assassins.

LIFE IS WHAT YOU MAKE OF IT

We start with a flashback, as our protagonist remembers her father’s study, and how he would let her come and read while he worked, if she remained quiet enough.  Cut to the present, as she works as a pharmaceutical salesperson in what is described as a very tough Russian market for drug sales.  Suddenly, things take a turn for the surreal, as the doctor’s face turns into a terrifying, fanged wolf.  By the time she arrives at the apartment of the man she’s looking for, the visuals have morphed into something resembling a beautiful mélange of Richard Corben, Robert Crumb and E.C. Segar, and she remembers seeing her father brutally MURDERED in their home.  The killer is overwhelmed at first, but then tries to explain what really happened.  She responds by telling him a story, and his home melts away to become a maze of caves as she tells it, ending with him trying to kill her in spectacular fashion and her escaping in an equally dazzling display of resourcefulness and courage.  As the issue ends, she drives away, the world returning to normal, save for a vision of herself flying away in a cape…

NOT WHAT I EXPECTED

First of all, I want to make it clear that I am absolutely IN LOVE with the art of Matt Lesniewski, with its echoes of ‘Heavy Metal’ magazines and wild animated films past.  There isn’t a single page of this issue that isn’t just plain beautiful and the transitions from reality to possible fantasy are breathtaking, especially as they’re set up by the first mundane sequence of her taking her (anti-psychotic?) medication.  I don’t know the name of our central figure, which is a problem, and the basic beats of this story are somewhat familiar, but paired with the incredible visuals, they make for an unforgettable comic experience.  It’s not clear how much of this is even real, but that’s not what matters in the end, as this is a story about stories… and maybe about hallucinations?  I don’t know, and honestly, I’m not sure that it matters, as this book reads so well that few of the flaws even matter in the end.

BOTTOM LINE: I AM OBSESSED WITH THIS ART

With perfect visuals augmenting a story that might feel a bit familiar, Crimson Flower #1 is an example of the power of comic books and their combination of story and art, making for an intense, impressionistic and rewarding read, earning 4 out of 5 stars overall.  If you’re interested in reading a book that will defy your expectations, I’d recommend you give this one a chance, as it’s like nothing I’ve read recently.

I feel like I've read this plot before, but the wild creativity in the art make it all new again. I would literally read the back of a shampoo bottle drawn this expressively and creatively.