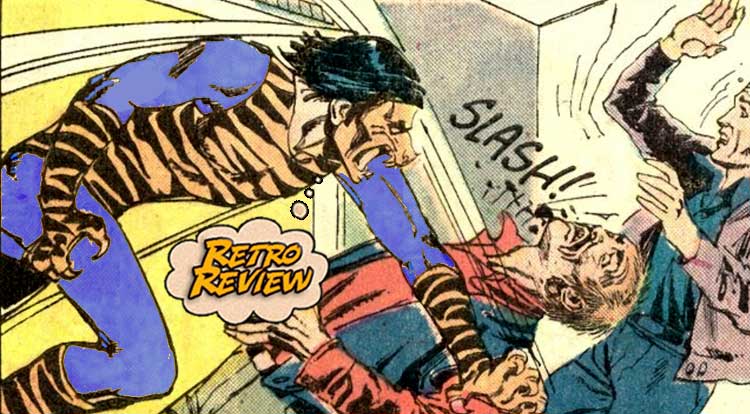 For one brief, shining moment, Atlas-Seaboard Comics tried to become an alternative to Marvel or DC, and their flagship hero was… somewhat unusual.  Your Major Spoilers (Retro) Review of Tiger-Man #1 awaits! Previously in Tiger-Man:  For years, Martin Goodman was the money-man behind Marvel Comics, and was the man who hired Stan Lee to be his assistant back in the 1940s.  Goodman sold Marvel, then left the company in the early 70s, hiring Stan’s brother Larry Lieber to help him start his own line of comics and magazines to challenger his former publishing house.  Atlas/Seaboard paid well, better than most of the industry and even returned artwork to the characters.  This allowed him to woo some of the biggest names in 70s comics, launching with a big splash in 1974, all in the name of a little bit of revenge after Marvel fired Goodman’s son, Chip.  One of the big gets was Ernie Colón, that rare talent who could go from an issue of Richie Rich to an issue of Vampirella without missing a beat, and whose art gives this issue its unique flavor. Meet Doctor Lancaster Hill, a well-to-do scientist whose focus was on the special sixth sense of preservation that tigers of Zambia exhibited, hoping to isolate and examine the factors that led to their prowess.  it’s an interesting sequence, not merely because of the delicacy of Colón’s art, but for its refreshing take on some of the tropes of superheroes.  Dr. Hill chooses to experiment on himself, a decision that saves his life when a local doctor sends a rabid tiger to kill him for trying to steal his patients. Now imbued with the strength of a tiger, Hill finishes his residency and is presents with the skin of the tiger he defeated as a gift from the chief, who explains that wearing it will give you the beast’s cunning and instincts.  Returning home to New York, Lancaster is welcomed by his sister Anna, but when a random crime ends with her murder, he swears revenge on the criminals of the city. Following a random clue (“the smell of horses”), Tiger-Man makes his way to a traveling rodeo, using his new powers to identify the killers, tracking them to a local bar.  The two cowboys briefly mock his getup before he unleashes the power of the tiger all over them! Weirdly, even though his first appearance (in Thrilling Adventure Stories #1) and even the cover of this issue identify Lancaster as Tiger-Man, the lettering (done by machine, typeset by Colón himself) repeatedly uses the Tigerman spelling.  Regardless of how you spell it, though, he makes short work of the barful of patrons, taking out the murderers and leaving them for the police.  As the issue ends, Dr. Hill realizes that this is a new chapter in his life. I was probably 13 the first time I encountered an Atlas Comic, and the fact that it wasn’t like the Marvels or DCs that I found on my local newsstands was fascinating.  Even now, I’m a big fan of Atlas/Seaboard’s output, as uneven as it was, and Tiger-Man #1 is one of my favorite books, with lovely-but-unconventional art combining with a well-written story to earn an impressive 4 out of 5 stars overall.  If you ask me about any Atlas/Seaboard comic or magazine, my answer will always be “BUY IT!”, as you’re going to get either a gem or a train-wreck: This is one of the true gems.

Hard to believe this is one of the classic Richie Rich artists, and the story is a well-done take on the familiar origin trope.