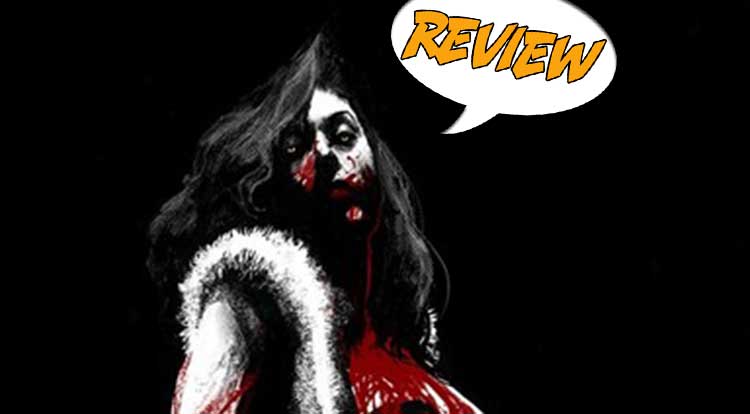 Philadelphia is in flames. But with the Sangsters fighting in the city, and Tevin making deals in the afterlife, can Abigail be stopped? Find out in Killadelphia #12 from Image Comics!

Previously in Killadelphia: We saw James Sangster navigating the afterlife, but he is not the only vampire there. John Adams is in purgatory, pondering his life and what happened. Then Tevin, who killed him, arrives and has a proposal to make to him, a way that Adams can actually make things right. In Philadelphia, Jupiter wreaks incredible havoc, but we see he also wants to kill Abigail. As she waits for him to approach, she reminisces about one of the great loves of her life, Sally Hemings. But as long-lasting as that vampiric love was, when John came back into her life, she made her choice to go back to him.

FLAMES IN THE NIGHT

As Killadelphia #12 opens, the battle rages in the city and spreads to the suburbs. In a couple horrific panels, we see how even being privileged and living in a gated community is not enough to stop all-out warfare. There is no running; there is no hiding. And Abigail watches coolly as the city burns.

Tevin talks with his grandmother who has always believed in him. Their bond is deep, and that love seems to be important at the heart of this book. Meanwhile, John Adams continues to ponder his life. He thinks about his complicity in racism and sexism. He was not a slaveholder himself, but he still accepted that others were. Now, with all the time in the world to think, he starts to wonder for the first time if he was wrong. This is such a subtle but important concept. We tend to be so loathe to ever think we could be wrong. How different might the world be if people felt they could admit they were wrong, thus giving themselves room to grow and improve.

In the city, Jose, James, and Jimmy are holed up trying to figure out what to do. Jimmy realizes he can access the emergency wi-fi system and he can get to the camera feeds around the city. The high-tech policing pays off. As they track Jupiter, he goes to a house that James recognizes. But when they get there, they find the door open, and the residents dead. Or almost all the residents. Unearthly laughter leads them to the basement where Jupiter is. He is free. He knows Abigail thinks she has won. But he feels sure that she is wrong. It’s very creepy.

Tevin has another mission. He is thinking about raising the undead, by which we figure he means Adams. He goes looking for the head guy, who is known as Corson, enlisting help from otherworldly denizens, who lead him close, but then turn back. Corson is a classically red, horned, demonic being who recognizes Tevin as an abomination, something neither alive nor dead. He is also torturing the Mayor. Tevin wants to make a deal. Vampires are already doing work that helps the ungodly; they least they can do is let him get Adams back.

It’s a little unclear where Jose and the Sangsters go next. They’re back in the car until they spot a vampire attack and James has them stop so he can burn off in fighting them. But this is Abigail’s group, and Jimmy is attacked from behind.

FROM CHAOS TO STILLNESS

The art of Killadelphia #12 is fantastic. It slides effortlessly from gritty and realistic to horrifically over the top. There is a running contrast between frenetic activity and unearthly calm. It starts out with the vampires running amok in the suburbs as Abigail watches almost serenely, a spot of calm in the maelstrom. On a bigger scale, we see it in the afterlife. Tevin must make his way through a demonic chaos full of nightmarish creatures with features reminiscent of symbols of death. On the other hand, his grandmother is in a place that, if not heaven, symbolizes peace – a place with green grass, calm waters, and a pleasant park bench.

I love the sequence where Tevin is making his way to Corson. We shift from segments with regimented panels with stark borders to a chaotic place that features background scenes with panels layered upon it. The backgrounds are scenes themselves, deftly continuing the story and connecting the otherwise disconnected panels. It is a brilliantly discordant way to depict a hellish area of the afterlife so we almost feel it as much as we see it.

Killadelphia #12 is a vampire story with vampires that are as interesting as they are horrible. Their plans, decades in the making, reveal problems in this country that have been there since the beginning. Never have I read a book that was so good at keeping the tension high.

A stunning conclusion to this arc that will leave you on the edge of your seat.