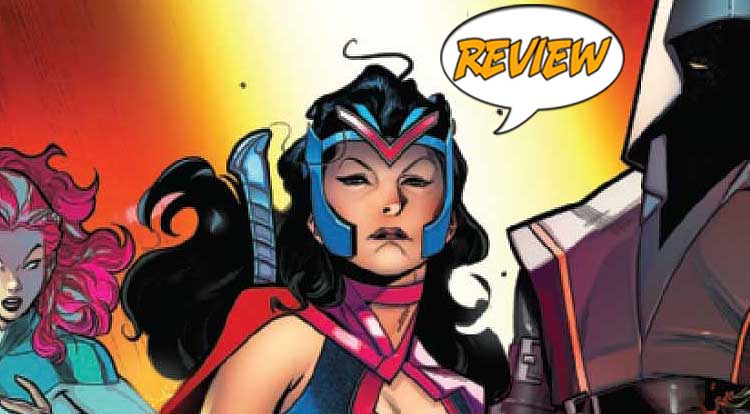 The team is brand new.  Their leader is dead.  And, oh yeah…  Symbiotes are taking over the United Kingdom.  Your Major Spoilers review of The Union #2 from Marvel Comics awaits!

Previously in The Union:  The Union must battle for their lives (and each other) as the Empyre Invasion crescendos!  Thrust unto the global stage, will they be able to prove themselves as a team or will they crumble as the world watches?  Plus, a devastating blow to the fledgling team rocks them to their very core!

BEGINS WITH A FLASHBACK

Ten months before the assembly of the team, we find the mysterious masked woman known as The Choir on the run in her native Wales.  She escapes the police, only to run head-on into Britannia, the hero who represents all that is just and fair in Great Britain.  Smash-cut to the present, where Britannia lays dead on the ground, while the rest of her team (assembled to protect the United Kingdom after their recusal from S.H.E.D. (Super Hero European Directive, a clear Brexit metaphor.)  Faced with chaos, Union Jack takes command as his four-person team is forced to battle their own security forces, transformed by the madness that is Knull, god of the symbiotes.  The Choir uses her sonic powers to clear the battlefield, but when the smoke clears, she is herself Venomized.  When Union jack wakes up, they track her down, managing to free her from the symbiote’s grasp…

…just in time for the whole team to quit.

This issue’s revelation that “the greatest hero in Britain” has died and that the other members of the team, each representing one of the UK nations aren’t going to stay together feels very much like it’s referring to the real-world changes in Britain, and… I don’t really like it.  Seeing Union Jack treated in-universe as useless and boring is clearly building to something, but as much as I enjoy the designs and concepts of the new team (especially The Choir), this issue feels hopeless already.  It’s bad enough that this book is launching into the middle of a massive universal crossover, and that it’s already been downgraded to a miniseries after being delayed by the COVID-19 pandemic, but having it all feel like it’s falling apart already makes it hard to engage.  Di Vito’s art is quite good, though, especially in the action sequences, and I really appreciate the sleek Knull-ified design of The Choir.  When it comes to new books with lower-profile characters, it sometimes feels like comics publishers are planning obsolescence, preparing for a book like this to get cancelled, which then becomes a self-fulfilling prophecy.

BOTTOM LINE: LIKE IT, KINDA WANT TO LOVE IT

Many times, in modern comics, you pick up a book and think that you could totally get into the characters, but worry that it’ll disappear in four issues, never to be seen again, and that’s always a disappointment.  The Union #2 is a well-drawn comic with a lot of interesting story and dialogue moments that nonetheless feels like it’s already halfway out the door, and it bums me out, because I feel like there’s a lot that could be done with these stories under Grist’s pen, leaving this issue with a still better than average 3 out of 5 stars overall.   It’s my fervent hope that these characters and creators get to continue after the end of this series, because there’s a ton of potential to be found in these pages.

A beautiful book with a puzzling storyline and the general feeling that this whole crew is doomed, which is a bummer, as I kinda like Grist's writing and this crew.