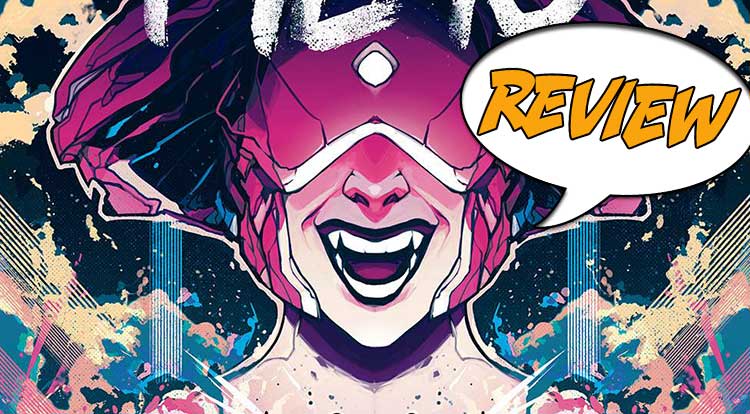 Ami’s visit to the Old James House has trapped her into hunting missing ghosts. Can she face the traumas of this task alone? Find out in Home Sick Pilots #2 from Image Comics! Previously in Home Sick Pilots: Ami and her friends and fellow band members, Buzz and Rip, are at the concert of a rival band, the Nuclear Bastards. Ami has the idea that they could do a cooler show by playing at the Old James House, a local house believed to be haunted. The police break up the concert and after everyone runs off, Rip tells Ami about a kid he knew from foster care who had broken into the house and died of starvation. Ami goes to the house. The next day, Buzz and Rip look for her and find only her skateboard. They break into the Old James House, and unbeknownst to them, so do their rivals. They meet and a fight almost breaks out, but then everything gets weird and the Nuclear Bastard are killed…by the house.

Home Sick Pilots #2 opens a year in the past when Ami meets Buzz and Rip. They realize she is into punk music and find out she plays the guitar, so they invite her to join the band they’re starting. They are the Home Sick Pilots, and they watch out for each other.

Back after the events of last issue, Rip pulls Buzz out of the Old James House. The Nuclear Bastards are dead, and there is blood all over the place. Buzz turns around to go back in and look once more for Ami, but now the door is closed and locked.

But Ami is not dead, not exactly. She is somehow possessed by the house. Her hair is white and she can float, if not fly, and she has made her way to an apartment across town, surprising the young couple who are there. The house has sent her to get something that holds one of its ghosts, a horseshoe. The man grabs Ami, and a flare of energy bursts from her and stuns him. Ami tries to take the horseshoe, but it dodges away from her, flies across the room, and lands in the woman’s hand. The woman claims it holds all her luck, and as she tells her story, it’s actually creepy. Since finding the horseshoe everything in her life has been so perfect, but it isn’t real and she feels trapped. She begs Ami to take the horseshoe from her.

But as Ami reaches for it, the horseshoe fades into the woman and the ghost possesses her and flies out the window. Ami barely understands what mystical powers she might control and suddenly she is in a magical fight. Ami does manage to get the horseshoe. The woman, now free, doesn’t entirely believe it. Finally, for the first time in years, she can feel the real world around her again, but she cannot live with the thought of the horseshoe coming back again.

Ami returns to the house and tells it that it is responsible for destroying the woman. The spirit manifests itself, wordless and faceless, but indicates to her that there are six more spirits she must find. Then it vanishes. As Ami wanders through the house, she sees traces of blood and wonders if something happened while she was gone.

Home Sick Pilots #2 is quite a pretty book, when it isn’t horrifying, and that’s an interesting dichotomy. I particularly like the way the scene with the horseshoe builds. At first we don’t suspect anything unusual about the woman. When she tells Ami that she can’t take her luck, Ami misunderstands, thinking the woman wants to keep it. But we see the odd color of her eyes, and we know there’s more to the story. She has been trying to get away and has even tried killing herself to no avail because if the horseshoe. When it takes her over, she becomes a strange being, partially humanoid but with wing-like appendages that look rather like a horseshoe.

This is a dark story. Ami seems to want to help the house recover its ghosts, but it is not clear how much choice she has in the matter. After the night’s experiences, she looks very alone and traumatized. She has had difficulty facing trauma before, and she’s captured here in a vulnerable moment, a moment when she wants to have help, but she also doesn’t want to drag anyone else in. It’s heart-wrenching.

Home Sick Pilots #2 pulls no punches with the stakes. While I was first intrigued by the though of returning ghosts to the haunted house, this issue makes me wonder now why they left.

Ami is trapped by the Old James House, and the house is no stranger to death!