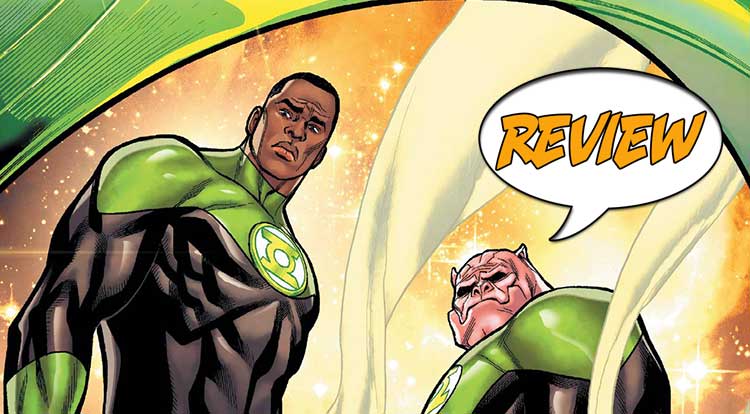 Across the universe the Green Lantern Corps have found themselves without their trusted power rings.  But, that doesn’t stop a Green Lantern’s duty, your Major Spoilers review of Future State: Green Lantern #1, awaits! Previously in Future State: Green Lantern: Well known Green Lanterns John Stewart,  Salaak, Jessica Cruz, and Guy Gardner have all found themselves in perilous situations, on top of that, their power rings have stopped working.

Future State: Green Lantern #1 opens up on a planet where a massive evacuation is in progress.  The locals are attempting to flee before The Vanguard of The God In Red descends and wipes them out.  They are being assisted by a team consisting of John Stewart,  G’Nort, and Salaak, all sans rings.  The story plays out with the team desperately trying to fight off waves and waves of soldiers while trying to direct the locals to safety.  Until things become most dire.  In the first follow-up story we see a trio of Yellow Lanterns infiltrating a mostly abandoned Green Lantern base, under orders from Sinestro to repurpose it for their own needs.  Hiding in the shadows though is Jessica Cruz, the one Green Lantern left who has been alone for a year on the station repairing things and attempting to perform her GL duties.  What then ensues is a game of cat and mouse, with Jessica being the cat.  In the final follow-up story we see Guy Gardner stranded on a planet where he had been attempting to bring two warring factions to peace.  Having been mistaken as a holy prophet,  Guy begins the long, long, job of bringing peace via diplomacy and societal progress.  Then an unexpected visitor arrives.

Future State: Green Lantern #1, is an interesting book that does a lot of interesting things with the Green Lantern mythos and the various characters who have carried the moniker, the only issue is that it’s the two backup stories that claim ownership to these things.   When it’s boiled down to its base components the first story is just a long drawn out sequence of John and his team fighting off generic baddies, arguing with a spaceship pilot, and looking at oncoming armies fearfully.  Other than that there isn’t much that story offers.  The other two stories pick up the slack a bit.  Jessica’s story has fun role reversal with Jessica instilling fear in the Yellow Lanterns as she hunts them down one by one.  It doesn’t try too much and because of this is the most purely enjoyable story in the trio.  The Guy Gardner story though, is a well written story all around. Using the trope of forcing a bullish character into a delicate situation works here.  Seeing Guy have to find a solution to a problem he can’t just punch his way through is entertaining, especially since they don’t try to write Guy differently, he retains his personality, just loses his capabilities. The problem with this issue though is that it’s not really clear what makes this a “Future State”.  There’s really no big shift in the status quo here, there’s no new characters or anything of the sort.  The only real change is that the rings aren’t powered anymore, which honestly is a story that comes up once every 5 years in Green Lantern books.

THE BOTTOM LINE: MOSTLY WELL WRITTEN, BUT NOTHING NEW

While the Jessica Cruz and Guy Gardner stories were well written and had gimmicks that worked really well,  the boring first story really drags this down.  Also, being that this is labeled as a “Future State” comic, but nothing in this issue feels like it couldn’t have appeared in any Green Lantern book from any time period doesn’t do it any favors.  3 out of 5 stars.

Future State: Green Lantern #1, drops the ball in a couple ways. First the lead-in story is boring. Second nothing in this issue feels like it could only be a “Future State”. That being said the two follow-up stories are good in their own right.