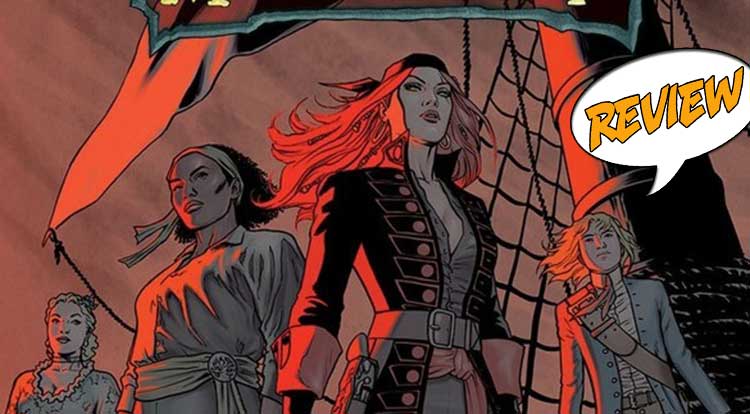 A Man Among Ye #4 Review

Anne Bonny’s crew of a few women thrown together by fate hatches a daring plan to rescue Jack Rackham. Can they outwit Woodes Rogers? Find out in A Man Among Ye #4 from Image Comics!

Previously in A Man Among Ye: Anne and Mary steal a boat only to find that it is being stolen by two other women, Iris and Jane, who claim to have been there first. But when the (male) owners of the boat show up, the women band together and flee. Out on the open sea they realize they want to go different ways. Jane wants to go to New England. Iris, who is Black, says that is not a good place for her. Anne insists they’re going to Nassau to rescue Jack Rackham. In the Bahamas, Rackham is turned in to Governor Rogers, who is happy to get Rackham but promptly betrays the pirates. And Rackham finds out that Rogers is currently hunting Anne Bonny!

A Man Among Ye #4 opens in Fort Nassau where Jane Castor claims to be bringing in the notorious Anne Bonny. The soldiers at the dock do not believe her, but Woodes Rogers shows up. He recognizes Jane and cordially invites her to dinner – and orders the soldiers to seize Anne. He is deliciously creepy.

Jane attends dinner, the only woman at the table. Woodes toasts her father and shares amusing stories about him until he is called away because he has received some important correspondence. It is from Jane’s father, who says she ran away, and he will pay a reward for her return. As Rogers muses on why a lady is consorting with pirates, he glances out to the harbor and sees his fleet going up in flames.

The flames are courtesy of Mary and Iris with a little help from the gunpowder the ships are hauling. Iris likes blowing up the ships, but questions Mary as to whether Jack is worth the risk, or even Anne. Meanwhile, in the cells, Anne uses a hidden knife to kill a prison guard and take his keys. She frees an adjacent pirate and tells him to free the rest while she goes after Jack.

In all the confusion, Jane attempts to slip away quietly, but she is stopped by Rogers who demands to know what she is up to. He threatens her, towering over her, and she punches him and runs out into the night.

Anne fines Jack, but before they can get away, Charles Vane comes down. He was once their friend; now he is willing to kill her for the money. Worse yet, Jack is willing to do the same. He shoots Anne as the other women arrive and Mary tackles him. As Vane laughs at them, Iris kills him. Anne is wounded, but not seriously, and the women make their way back to their boat leaving a swath of destruction behind them.

A Man Among Ye #4 centers around four very different women who find some common ground in their attempts to get away from the various lives that have been set out for them. They have different social statuses, and in this issue, it is interesting to see them all playing on their skills and/or privileges. Jane, being high-born, has the privilege; it is why she is invited to dinner while Anne is locked away. Seeing her at dinner, formal, silent, eyes cast down, we wonder about the plan and whether she is still part of it. Later, when she punches Rogers, it is a delightfully dramatic surprise.

There is a lot of action and a fair amount of treachery as the characters move through this story. Despite this, is it pretty easy to follow. I like that we don’t see the planning for any of this ahead of time; we go along for the ride as it all unfolds and that keeps it exciting. The fight scenes are solid and the timing dramatic.

BOTTOM LINE: A PIRATE STORY WITH A TWIST

A Man Among Ye #4 is a pirate story that shows us how dangerous a life it is, but that for some people it still seemed better than the options otherwise available to them. Centering the story on women really brings this out. It makes for a read that is both adventurous and interesting.

Is going back to rescue Jack Rackham really worth all the trouble?