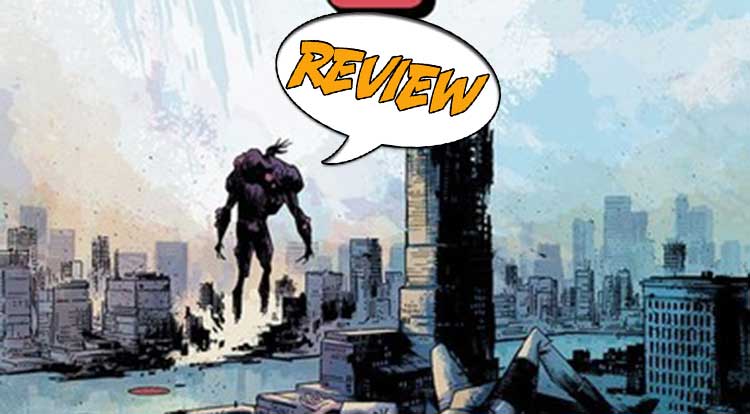 The Behemic Initiator is working! Is creating giant people the answer to the fight against the Jacks, and is it the end of the Big Girls? Find out in Big Girls #6 from Image Comics!

Previously in Big Girls: As the Jacks move in to attack The Preserve, an alarm is tripped in the Behemic Initiator. As Ember, Devon, and Apex get ready for battle, Ember spots Gulliver, who tries to talk her into joining her plot. Instead, Devon also spots her and strikes her down. High Marshal Tannik goes to the Behemic Initiator where he finds Martin hooked up to the device. He believes that Gulliver’s plan will fix everything. Ember recognizes the Jack she helped before and tries talking to him, asking for his help. He asks if she is going to kill him. When she says no, he agrees to help her and the Jacks move out again peacefully. Then there is an explosion at the Behemic Initiator, and out of the smoke steps Martin, newly enlarged and still human!

A BIG FIGHT TO REMEMBER

Big Girls #6 opens with Martin stomping through the city around the Initiator. Ember spots him and begs him to be careful. He is still distraught about the loss of his son, and now he realizes he can get his payback. Ember talks to him, getting through to him as she recognizes him as a grieving father. Devon and Apex are amazed and ask him how he became…big.

Then Martin is blindsided by a punch. Tannik has availed himself of the Behemic Initiator and is himself now giant. He strikes Ember, which gets Martin involved on her behalf. Then Tannik turns his rage and power against Martin. Ember steps in and hits Tannik, so he calls on Apex and Devon, as their commanding officer, and orders them to kill Martin. Apex refuses. Devon hesitates and Tannik orders her to give him her weapon. He takes it and shoots her. In the meantime, we catch a glimpse of where Gulliver lies, but when we see the spot again, she is gone.

Now that the Behemic Initiator is working the way he wants, Tannik declares the Big Girls expendable. As he aims the gun at Ember, the Jack she had helped arrives and dispatches him. The fight is over. Apex asks if Martin is going to be trouble, but he just wants to help. And it turns out that Devon is wounded, but not dead.

What I really like is that although this is the end of the main conflict, it isn’t the end of the story just yet. This is a world with a lot of problems, and many of these characters have loose ends. Apex, not surprisingly, becomes the new High Marshal. The main problem with the Jacks was hunger, and now they know they have the technology to make giant food. Martin has a connection with the Jacks and can talk with them. And Ember wants to go home, at least to see whether or not her family is still alive.

And the epilogue is so wonderful. This whole story opened with Martin losing his (big) little boy. Now we get to see the change in how these children are treated. I love that this story ends on a truly positive note, and that we got there by characters recognizing that sometimes talking with people can help to clarify things.

The art of Big Girls #6 continues to be solid. A lot of care has been taken to create the contrast between the big characters and the normal-sized humans, and this leads to great panels, such as Martin’s foot threatening to squash several soldiers. And there’s a terrific double-page splash when Tannik suddenly appears. Our view is from somewhat overhead, focusing on Tannik, Martin, and Ember. But the background is full of city buildings, large by human scale yet dwarfed by the characters, and the city goes on out into waterways. It is breathtaking.

The action is fierce and well-choreographed. The main fight is well-paced with plenty of twists and turns. I like the way it moves from long shots to close-up reactions. It’s a tight way to keep us on top of just who is the bad guy. Martin and Tannik are both naked, obviously, as the Behemic Initiator just makes them big, and giant-sized clothes aren’t just lying around. There is clever use of shadows to keep things from being too revealed.

BOTTOM LINE: PICKING UP THE PIECES

I wasn’t sure what to expect with this series, but Big Girls #6 is a terrific conclusion to a captivating story. There’s a strong feeling of exploring several “what if’s” as the story progresses. Plot points are foreshadowed well so the surprises are surprising yet don’t feel cheap. I’m glad I took a chance on this book, and I really enjoyed it.

Maybe fighting is not the only answer in the conflict between humans and Jacks.