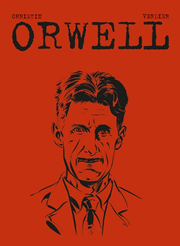 Self Made Hero sent Major Spoilers the cover images and solicitation information for new graphic novels arriving in April, May, and June 2021. Through wife-swapping, slash fiction, medieval aliens, childbirth, swamp monsters and a mysterious black balloon, I Feel Love questions the one emotion that is meant to make us feel good—but that often does the exact opposite. As unflinching as it is honest, this is the kind of book you don’t take home to meet your parents.

Fermín Solís’s graphic biography depicts a decisive moment in the life of the great Spanish director of Un Chien Andalou and Oscar-winning The Discreet Charm of The Bourgeoise.  This is the turning point when he doubted surrealism and contemplated embracing a more social type of cinema. changing the world by showing the hidden heart of reality. Orwell studied at Eton, joined the police in Burma, fought in the Spanish Civil War, fiercely opposed Stalinism, and lived in London’s slums while working as a journalist.

With illustrations by a team of artists including Annie Goetzinger, Juanjo Guarnido, Enki Bilal, Manu Larcenet, Blutch and André Juillard, Pierre Christin and Sébastien Verdier’s Orwell offers readers an intimate yet definitive portrait of our greatest political writer, a visionary commentator of contemporary society . Publication date:  13 May, UK  (18 May, US)

From best-selling author of Nick Cave: Mercy On Me Reinhard Kleist, Knock Out! draws a powerful, emotive portrait of a bisexual black athlete who, facing racism and homophobia in 1960s America, found success in the world of boxing. This is the story of a fierce and ambitious fighter, and of a knock-out blow that ended one life and changed a second forever. The perfect companion to Kleist’s The Boxer: The True Story of Holocaust Survivor Harry Haft (SelfMadeHero, 2014).
Publication date:  10 June, UK   (8 June, US)

via Self Made Hero