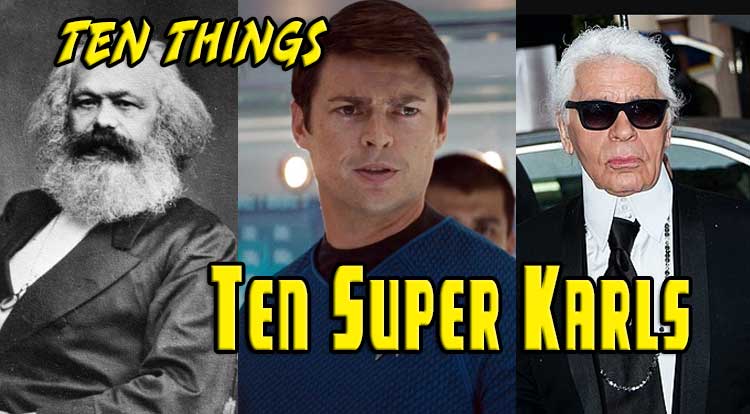 Comics are full of Matthews and Stephens, but some names are less common, even among our favorite supers!  Welcome to Ten Things: Ten Super Karls!

Whooshman-Bicarbonate Films, in conjunction with An Amateur Comics Historian and the Korean Amateur Radio League, Presents: Bitten as a child by a mutant Pteranodon (not a joke), Karl Lykos is an energy vampire who sucks the life out of others to maintain his wingy dinosaur powers. A Tolkien fan who took his nom de guerre from ‘The Lord of The Rings’, Lykos has gained notoriety recently for his burning desire to turn people into dinosaurs, regardless of the other possible applications of his super-science. The black sheep of a set of quadruplets, Karl Courtney was driven by the desire to find out who Batman truly is, as well as an inexplicable love of pirate fashion. His sanity was a bit questionable, as he somehow believed that his quad siblings were actually Batman, falling prey to the real thing. He later joined the Secret Society of Super-Villains, but his career ended when he faced The Secret Six, as banshee Jeannette broke his neck without a second thought. A native of Earth-138, Karl Morganthau is an ally of Hobie Brown, the Spider-Man sometimes designated Spider-Punk. (It’s an alias that Brown himself dislikes.) Morganthau punches evil as well as prime Captain America, with slightly less nationalistic fervor, combating the corrupt President Osborn (Ozzy, not Norman) who was bonded with a Venom-style symbiote, as well as fending off his universe’s Annihilation Wave. A brilliant scientist, Karl Keller had the misfortune to live on the wrong side of the Iron Curtain, and was imprisoned for his political views. Finding a lost Kryptonian artifact while working hard labor, Karl was able to reverse-engineer himself super-powers, breaking out and going on a rampage across the world. Keller even found a kindred spirit in a young thief, who dubbed himself Annihilator, Jr., forcing Superman to get involved. When last seen, Keller had disavowed his powers and was raising said pick-pocket, who had been turned into an infant because of a side-effect of their power serum. #COMICS! With tremendous solar powers to overcome his seeming lack of a neck, Karl Hansen was a member of Stormwatch during a conflict in the Middle-East. He and his team were thought lost in action, but in fact were captured by the evil Kaizen Gamorra for several years. Upon returning to the US, Karl went into semi-retirement, marrying fellow Stormwatch hero Nautika and making a life in the suburbs.

He still has no neck. One of Batman’s earliest foes, Karl Hellfern was an early adopter of the patented Perfectly-Realistic-Rubber-Face-Mask™ later adopted by super-spies and Batman impersonators everywhere. In his first appearance, he blackmailed Gotham City’s elites with a deadly pollen extract, seemingly perishing in a raging fire, only to return with his mug horribly scarred. He was later kidnapped by Intergang and forced to be a member of their Science Squad, creating evil experiments to his black heart’s content. Born in the United States to German immigrant parents, Karl Kaufman was an expert pilot who founded his own flying circus. When World War I erupted, he took to the air to fight off German aggression, wearing a costume to protect himself from reprisals and just loooook coooool. He later joined the Freedom’s Five, a group of costumed heroes who operated in Europe during WWI, working alongside Union Jack and others and punching evil. He was killed trying to get his parents out of Germany in the closing days of the war. The son of Nick Furst of the First Family, Karl Furst is empowered by the same alien energies that make his father, aunt, cousin and sister superhuman. In his case, he can manipulate his physical form and augment it with the power of Kirby Dots, protecting Astro City with his extended adventuring family. He has replaced his dad as the First Family’s young hothead. Inspired by his sister Selina’s life of crime, Karl Kyle set out to make a name for himself among the elite of Gotham City gimmick bad-guys. Stealing her Catmobile (Selina had given up her life of thievery by this time, attributing it to comic book personality disorder and amnesia), he took a shot at greatness and failed miserably. Karl was last seen at his sister’s wedding to Bruce Wayne, and while another King of Cats appeared in post-Crisis continuity, he does not seem to be a Kyle in that continuity.

Neither King of Cats should be confused with Thomas Blake, the Cat-Man.

A student of The Ancient One, Karl Mordo was not amused when Stephen Strange arrived and became the teacher’s pet. Brought to life by Chiwetel Ejiofor, Mordo left the Ancient One’s tutelage after her death, ominously claiming that there are “too many sorcerers.” Presumably, the upcoming sequel to ‘Doctor Strange’ will follow up on that, but I don’t think that it’s a spoiler to remind you that, in the comics, Baron Mordo is one of Strange’s most implacable recurring enemies.

Thanks to Faithful Spoilerite and archivist of Top 5 Karl (@yoyology) for inspiring this week’s topic.  Feel free to follow along @MightyKingCobra for more Ten Things madness on Twitter or check out the full Twitter archive here!  As with any set of like items, these aren’t meant to be hard and fast or absolutely complete, but those pesky c-spelled variants might make this one pretty close to done.  Either way, the comments section is below for just such an emergency, but, as always: Please, no wagering!