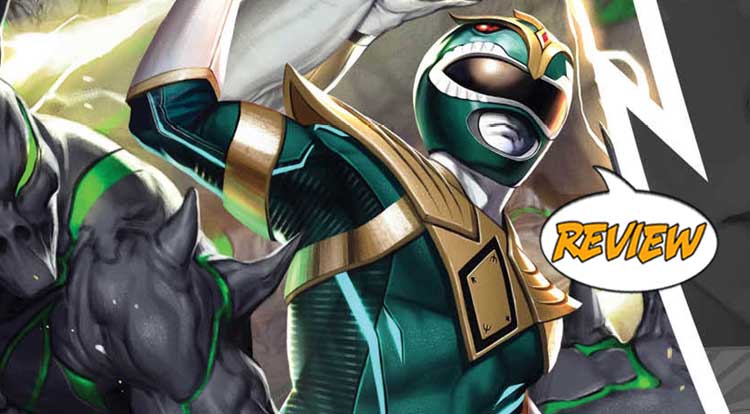 A shocking betrayal rocks the Power Rangers team, and the team may not survive.  Your Major Spoilers review of Mighty Morphin’ #3 from BOOM! Studios awaits!

THE ADVENTURES OF YOUNG ZORDON

Once again, this issue begins with a flashback to Zordon’s youth, wherein he takes his first undercover mission on an alien world.  When his commander explains that he hoped to see the promising young Eltarian following him into battle for years, Zordon explains that he’s not a warrior.  10,000 years later, he’s still fighting… or at least his charges are.  All seven Power Rangers combined can’t quite overcome the power of Zedd’s Chaos Putty, leading Billy to realize that the Green Ranger is taking more damage thanks to his chaos energy powers.  Billy helps him to teleport off the field, but Yellow Ranger Aisha overhears his advice and realizes that Billy has something to do with the theft of the Green Ranger power coin.  The villains even mind-control Black Ranger Adam into attacking his compatriots, causing them to have to flee the battlefield.  Back at the Power Center, Aisha confronts Billy, while Zordon confronts Grace Sterling about her use of the dragon powers, while the identity of the person inside the armor is still not revealed.

I HATE ZEDD *SOOOO* MUCH

As the issue ends, a newly confident Lord Zedd has made his monster grow, and frankly, I want someone to punch him.  Hard.  The downside of this issue’s focus on fighty-fighty is the fact that it feels a bit familiar (reminding me of the battle with Rita and her Dark Rangers a couple of months ago, as well as a couple of other battle issues recently), but there are some lovely moments to be had.  Bulk, Skull and Candice have some lovely bonding moments as they’re nearly killed by putties, while Billy, Adam and Aisha get their own important character moments during the chaos.  Marco Renna once again delivers with the visuals, with special attention to the Zord sequence at the end of the issue, where every one of the giant robots looks amazing, while Grace’s awkward talk with Zordon is incredibly tense.  Given that it’s a fight between a blue hologram and an old lady, that could have been a hard road.

Mighty Morphin’ #3 isn’t quite wearing out its welcome, as both story and art are quite good, and even the vague worry that we’re getting in a “chaos energy monster” rut doesn’t destroy the suspension of disbelief, leaving this issue with an impressive 3.5 out of 5  stars overall.  Power Rangers can be a difficult property to work with, but Parrott, Renna and company have got a lot going for them, and I’m still wanting to know who’s in the DragonRanger costume this time.