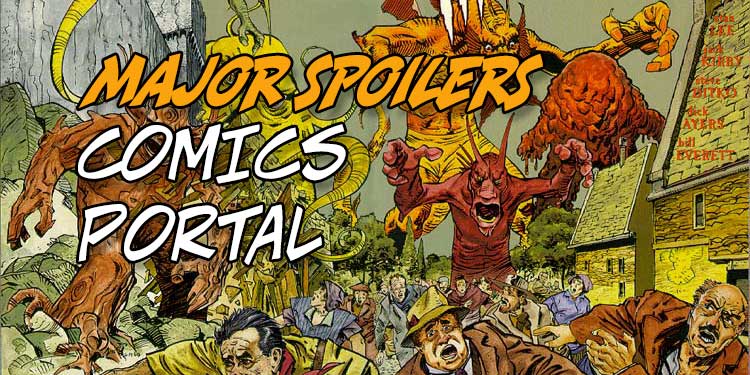 COMICS PORTAL: Bring Back the Monsters!

I love my longjohns superhero stories for sure, but I still want more variety in my comics reading! I recently read a public message from Scott Snyder (of Batman and Undiscovered Country fame) that, now that the last “Metal” event had come out, he was going to focus on his creator-owned properties and stories… at least, for a while!

After several successful years of writing superhero stories, I can’t blame him! A great writer can tackle a lot of different kinds of stories, and he’s one of the very best! He’s proven his ability to tell stories in many different genres, so I’m looking forward to what comes our way next from Mr. Snyder!

That reminded me of the days—yes, long ago—when comics weren’t mostly superhero books. We had westerns, we had romance, we had science fiction, we had horror, we had mysteries, we had monsters… and we had fun reading them all!

It seems like it was in the 1960s or thereabouts when longjohns characters became the main staple of comics storytelling. One by one, books called Where Monsters Dwell and Young Romance and the like weren’t selling as well as heroic characters, so they ceased publication.

Every so often, one of the “big” publishers revisits those days. In 2006, for instance, Marvel put out a book called Marvel Romance Redux: Love is a Four-Letter Word. Here was the comic’s description:

NOT A DECIMATION BOOK! Not guest-starring WOLVERINE! Not the return of HAWKEYE! No, this is an EVENT UNLIKE ANY OTHER… a one-shot with today’s writers rewriting yesterday’s romance stories. Oh, AND IT’S FUNNY!

Now that your eyes have returned to normal after rolling back into your head, consider this: It was worth buying and reading, in my opinion! Really!

THE POPULARITY OF IMAGE COMICS Whenever I talk with creators and fans alike, I run into this notion—”Superheroes are the property of Marvel and DC. Those are the only places those stories can be told!”

What this all leads to is the reason “other” comics companies are doing reasonably well. They tell OTHER kinds of stories.

The company that often benefits from all this is Image. They normally do NOT go where Marvel and DC “run the show,” as one store owner put it. They sell books like Sex Criminals and The Walking Dead (granted, Marvel Zombies exists, too, but these folks aren’t wearing costumes).

I know some local comics shops that “make theirs Image” instead of the other companies. One store in particular, when you walk in the front door, presents you with a display of all the Image titles out that week before you can even get close to Marvel or DC.

Of course, not every Image title is a winner. And even Image is putting their toe in the superhero market with Cross Over written by Donny Cates. But their bread and butter is telling tales that don’t focus on supers, as they are sometimes called.

And I still think Image could push the boundaries more than they do.

There are other companies that tell other kinds of stories as well as Indie comics creators. There was one of these four-issue miniseries’ where the lead character died halfway through the story. I was shocked! The writer had the solution ready to go, so I enjoyed the book!

Do these comics sell like Spider-Man or Superman? No, but that’s okay!

Should sales be the primary focus when it comes to comics? Well, I do like to call it show business, after all, and you need money to be able to pay for creation and printing and distribution and such.

But I really believe we need to expand our horizons when it comes to reading. The only genre I struggle with is romance because, in my mind, the end is a 50/50 shot. Will they get together or won’t they? If they do become a couple, it’s happy… and dull… after that, so they usually don’t.

See, there are three types of plots—the happy ending, the unhappy ending, and the tragedy. I would add a fourth, and that would be the story that NEVER ends, something comics have perfected over the decades.

While I’m at it, let me list the seven story archetypes: 1. Overcoming the monster; 2. Rags to riches; 3. The quest; 4. Voyage and return; 5. Comedy; 6. Tragedy; and 7. Rebirth. Pretty much every single story fits in one of these archetypes.

WHY ARE SUPERHEROES SO POPULAR?

As I’ve read comics over the decades, I’ve often puzzled over the popularity of superheroes. I mean, in real life, being a superhero like they are in the comics would be odd at the very least. Wearing spandex? Being super-strong? Never aging? Getting into fistfights again and again? It’s not what I would want to do! Yet, reading stories about this kind of person is entertaining!

One of the reasons we like superheroes is the notion that good triumphs over evil. We want the hero to beat the baddie the way it should be in real life but often isn’t.

Second, we like the colorful nature of their outfits and their adventures. I mean, we work 9 to 5 each workday often performing menial tasks. We wish we could do fascinating things while looking mahhh-velous! It’s escapism at its finest!

Third, most of the time, things stay the way they are. In real life, we have to face loss and change on a pretty regular basis. In comics, most of the changes are cosmetic—by that, I mean they are not significant changes. They are largely shifts in appearance and then often only temporary.

Fourth, we’d like to be strong like that. I often tell people I like Batman because, if I really had to and had enough time and money, I could become like him. Yes, it would involve a LOT of training and studying and the like, but it could happen! Really!

There are other reasons, but I’ll let you fill in those blanks in the space below!

To some of us, though, this kind of story, while fun for a while, gets genuinely dull. If we KNOW the good guy (or gal) will ALWAYS win, I don’t need to read the entire story to reach that result. It WILL happen. Boring!

I particularly like stories “where the bad guy wins every once in a while,” as one of the lyrics in the song Will It Go ‘Round In Circles? states. I prefer not knowing the end of a tale before I read it. When I don’t know how a story will end, I’m interested! I have to know!

I have a friend who likes Fin Fang Foom from Strange Tales when it was one of the early Marvel monster comics. That character still pops up occasionally, and my friend lights up when FFF appears! Maybe we ought to try bringing him back again? I wouldn’t mind a monster comic… one that doesn’t have a young child working with it.

I would love to see the industry widen their perspective when it comes to storytelling. Bring back the monsters, the romance, the westerns, etc. It would be worth it explore these genres again!