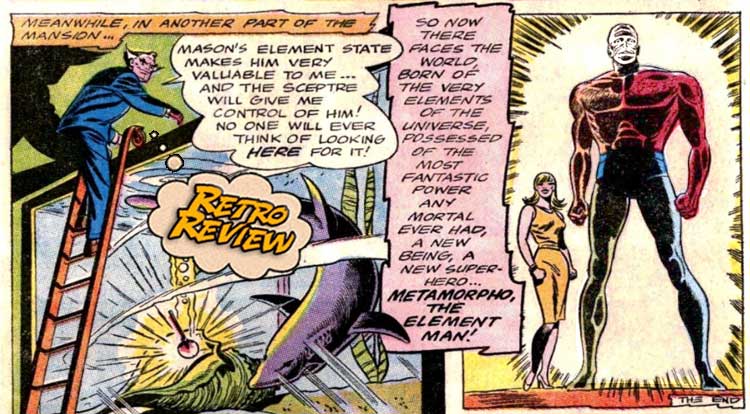 He’s an Outsider, a Justice Leaguer and a Terrific…  but what do you really know about Metamorpho?  Your Major Spoilers (Retro) Review of The Brave and The Bold #57 awaits! Previously in The Brave and The Bold:  Rex Mason is what the Ladies’ Aid Society would call a real catch, a solider-of-fortune and archaeologist whose adventures are legendary and whose fans are numerous and mostly female.  As this issue opens, we see crowds of cheering folks waiting for him to return from his latest South American sojourn, only to find that he’s not on the plane at all.  He’s parachuting down to meet his girl, Sapphire Stagg. Of course, Sapphire’s dad, Simon Stagg isn’t thrilled that Rex blew him off and made him look like a fool in front of the Mayor, but he has a way to get even with the thrill-seeker who would woo his daughter.  Simon sends Rex and Java (his right-hand caveman)  into the desert to bring back the legendary Orb of Ra!  This sequence reminds me how incredibly talented Ramona Fradon is, as we see the twosome make their way to the lost pyramid of Akh-Ton! Quickly, though, the inevitable betrayal occurs, as Java steals the Orb of Ra, knocking Rex Mason unconscious and leaving him unconscious in a hidden chamber.  Unbeknownst to anyone, though, his falling form triggers a mechanism that drags him deeper into the pyramid, pulling him towards a strange glowing rock. Rex is amazing that he’s even still alive, but the real surprise comes as he tries to climb back out to the world. Realizing that he can transform his body into different chemical forms, Rex repairs his wrecked plane with his new abilities and sets off for home.  When he arrives, he finds Simon Stagg trying to access the powers of the Orb of Ra, only to be sent packing by the clever use of sodium, then a transformation into hydrogen gas allows the newly minted Metamorpho access to Stagg’s inner sanctum.  Sapphire is horrified to hear Rex’s voice coming from the strange creature’s mouth, leading Java to attack.

It does not go well for him. Rex convinces Stagg to try and cure his transformation, but even Simon’s fortune can’t undo the magic of Ra himself.  Metamorpho saves Sapphire’s life when things go wrong, allowing her to see that he’s still inside the strange chemical composite form, and we end with her agreeing to stay with him as they search for a cure.  Fifty-five years later, they still haven’t found it, but I’m really sort of fine with that, as The Brave and The Bold #57 sets one of DC’s most unusual heroes on the path to a long career of kissing Sapphire, bickering with Java, punching evil and calling his future father-in-law a jerk, with a wonderful story and perfectly charming art from Fradon earning 4.5 out of 5 stars overall.  It’s a fine issue and well worth the price, if you can ever find one.

Ramona Fradon is one of the forgotten geniuses of our shared comic history, and this issue's visuals are proof of why, and Haney makes a fun, off-beat hero out of some interesting ingredients.